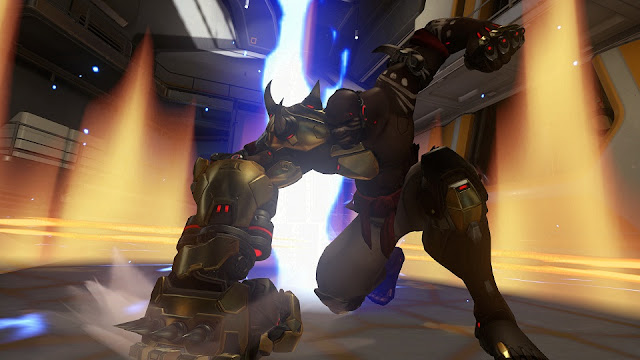 Many players have been asking for a change in the dive/aggressive hero meta, and Patch 1.13 has delivered.  After much stagnation, the introduction of Doomfist coupled with buffs/fixes to Reinhardt and Zarya have done just that.  Many heroes are viable again, and new strategies and team compositions are being tested to find synergies with Doomfist.  As always, I hope you enjoy this week's Console hero meta report! 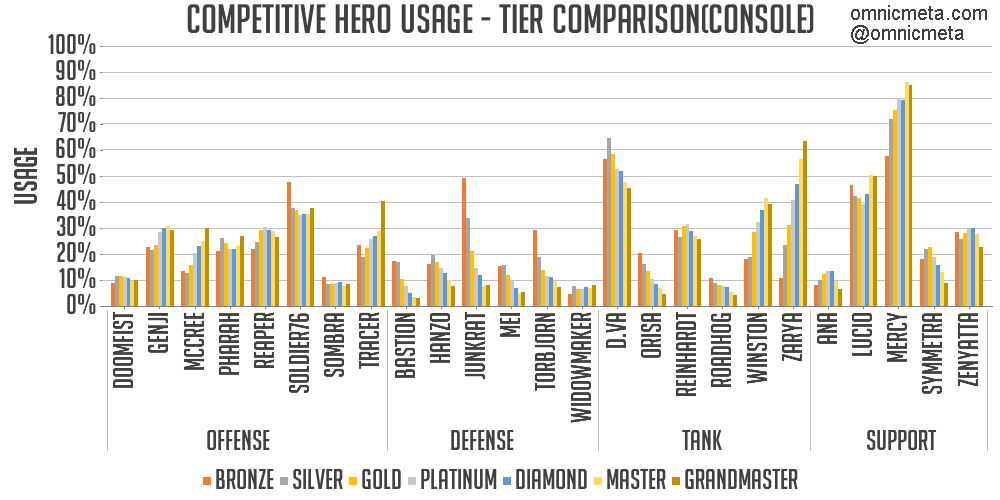 Patch 1.13 continues to impress, delivering a much desired meta shift.  Doomfist was finally enabled several days ago, and makes his debut this report.  He is seeing around 10% usage on the charts,  but considering he was only available for 5 or 14 days of data collection, he is actually around 25% usage - and one of the most popular Offensive heroes in the game currently.  Whether this is simply a passing interest or the start of team compositions built directly around him, Doomfist has made the initial meta impact that Sombra and Orisa did not.  The other big changes are the rise of Zarya and Reinhardt - mostly stemming from Patch 1.13 bug fixes and buffs.  Zarya has long been a strong utility hero that can be played in a wide variety of situations, and is now the #1 Tank at Grandmaster tier.  Both Zarya and Reinhardt are displacing recent core heroes Winston and D.Va - which signals that dive team compositions are fading in popularity.  With the higher tiers seeing larger shifts in tank play, time will tell if Diamond -> Grandmaster preferences trickle down.  Supports remain unchanged from last report, with most popular hero Mercy (80%) continuing her dominance, followed by ever popular Lucio.

This report we see big changes, particular in the Platinum -> Grandmaster tiers.  Patch 1.13 has been good for both Zarya and Reinhardt, after months of falling out of favor with the rise of dive/aggressive team compositions.  Zarya in particular is eye-popping, as she jump more than +15% usage in Master and Grandmaster tiers.  Other tiers appear to be reacting to other changes in the Meta, with McCree being played more at Gold and Platinum - he is known to be a good counter to the recently-released Doomfist.  At Bronze and Silver, the heroes being played continue to shift greatly report to report.  One main trend is the growth of Defense hero play in Silver and in Bronze.

For the top 2 biggest usage losers this report, we see two very familiar faces.  Winston and D.Va have been the top gainers the past several months as dive team compositions grew in popularity.  Now, with Patch 1.13, it's clear the are falling out of favor as Zarya and Reinhardt come back into the meta.  For Bronze, players appear to be shifting heroes more frequently, this report Mei and Pharah have particularly fallen out of favor.  Special mentions for losers are Pharah (-3% usage across tiers) and Reaper (-3% usage across tiers). 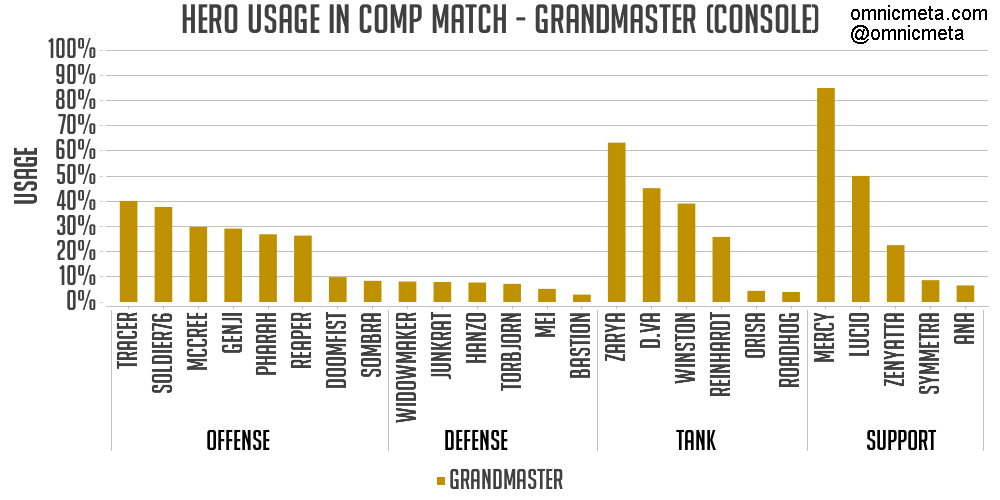 Offensive hero play at Grandmaster continues to be led by Tracer and Soldier, though significant shifts have happened since the last report.  With the introduction of Doomfist (+10%), McCree (+3%) has been the only other offensive hero to gain - Genji (-1%), Pharah (-4%), Reaper (-5%), Soldier (-3%), and Tracer (-3%) are all down significantly this week.  With the meta shifting away from dive, we may see more changes in the upcoming weeks.  For Tanks, the buffs to Zarya's ultimate appear to have help bring players back.  A huge shift has occurred, with Zarya (+18%) moving from #3 most popular tank to #1, overtaking D.Va (-13%) and Winston (-8%).  Rein is also seeing more play after his buff and bug fixes, and the four tanks have a prominent place in the meta.  Time will tell if the tank shift becomes a trend.  For supports, Mercy (+3%) saw a bump in play since the last report and remains a near-given at Grandmaster, paired usually with a Lucio or Zenyatta. 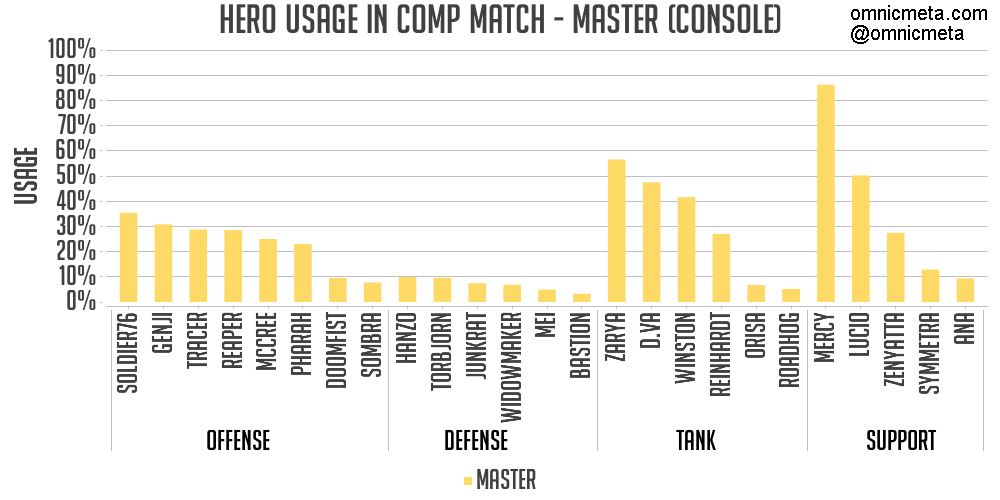 For Master tier, the introduction of Doomfist (+9%) appears to be mostly at the expense of Reaper (-4%) and Tracer (-3%).  Six DPS heroes remain part of the meta - Soldier, Genji (+2%), Tracer, Reaper, McCree (+2%) and Pharah.  Similar to Grandmaster, Zarya (+15%) grows greatly in play this report, passing D.Va (-11%) and Winston (-9%).  With Reinhardt's (+9%) gain (likely stemming from his buff and bug fixes), all four tanks are a significant part of the meta.  Continued growth in Zarya and Reinhardt's usage remains something to watch for the future.  In the support category there has been little movement this week, as Mercy (-3%), Lucio (+2%) and Zenyatta remain the most popular. 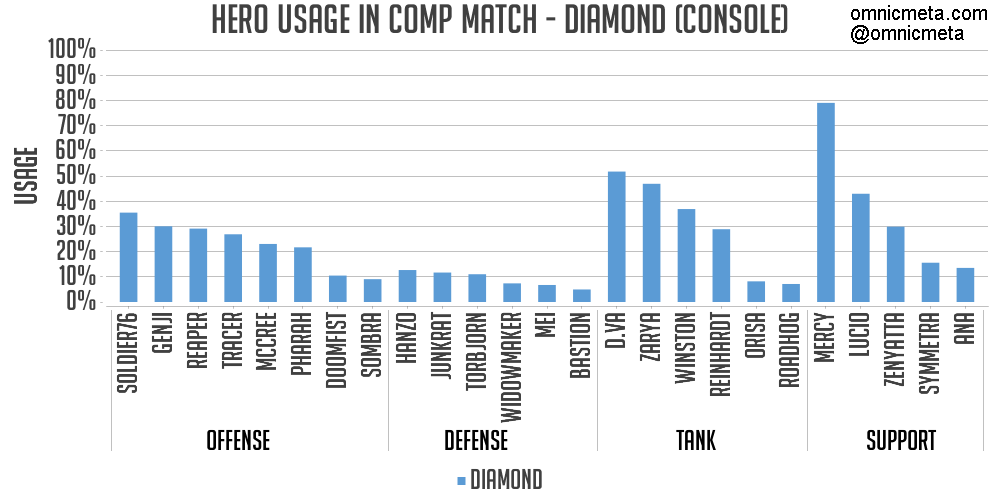 Similar to Master and Grandmaster tiers, Doomfist (+10%) and McCree (+2%) are seeing the biggest increases in play (Doomfist was just released).  Reaper (-4%), Soldier (-3%), Pharah (-2%), and Tracer (-2%) are all down in usage this report.  The group of six usual DPS suspects (Soldier, Genji, Reaper, Tracer, McCree, Pharah) remain the biggest part of the meta.  For tanks, Zarya (+6%) has crept into the #2 slot ahead of Winston (-8%).  The Patch 1.13 buff to her graviton surge coupled with the synergy with Doomfist's ultimate may have helped Zarya gain some ground this report.  D.Va (-6%), Zarya, Winston, and Reinhardt (+5%) all close to each other and a big part of the meta.  Support play remains mostly unchanged, with Lucio (+2%) taking a bit of play share from Mercy (-2%). 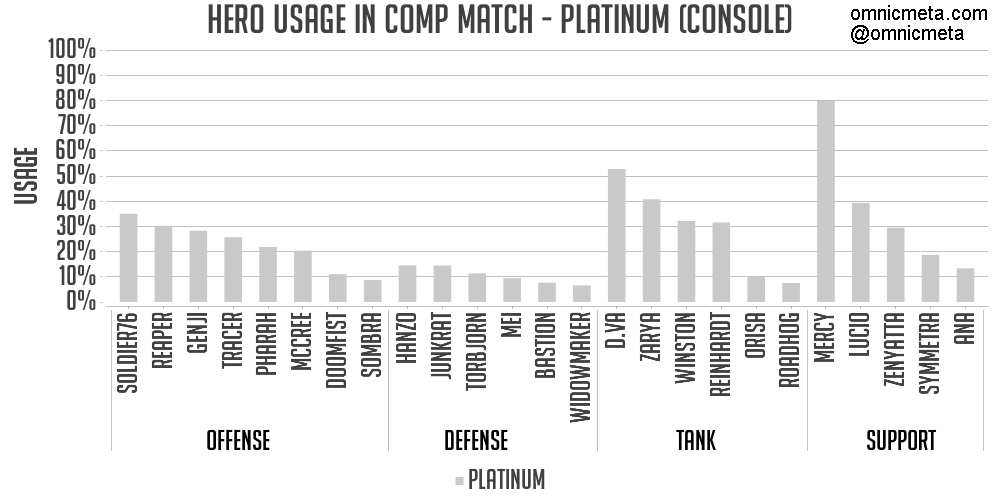 Patch 1.13 and the introduction of Doomfist into competitive is also generating a shift in Platinum.  Doomfist (+11%), Genji (+2%), and McCree (+3%) are the DPS heroes moving up this week, while the other popular DPS heroes Soldier (-3%), Reaper (-3%), and Pharah (-2%) are moving downward.  Overall, six heroes appear to be viable parts of the meta.  Tank play is beginning to equalize among four tanks - D.Va (-3%), Reinhardt (+3%), Winston (-5%), and Zarya (+5%).  It appears as though Reinhardt will overtake Winston next report, and D.Va may slip further.  Supports remain unchanged from last report, with most popular hero Mercy (80%) continuing her dominance.  Lucio and Zenyatta follow as support heroes paired most often with Mercy. 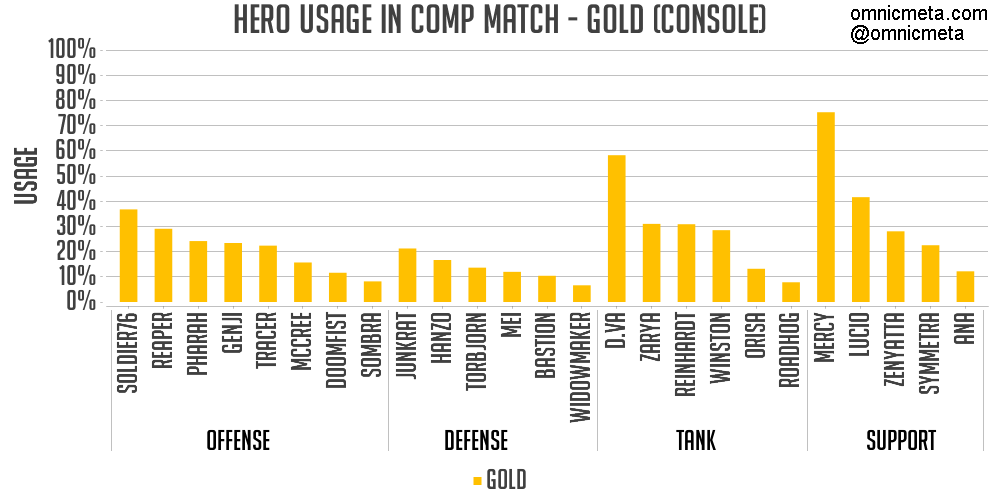 Much smaller changes are affecting Gold - a likely result of this "new meta wave" not yet trickling down from the higher tiers.  The notable change in Offense heroes is McCree (+2%), which pushes him slightly into Tier 4 at 16%.  His flashbang is quite effective at stopping the increasing number of Doomfists on ladder.  There are a total of 8 DPS heroes in the meta currently, as Soldier, Reaper, Pharah, Genji, and Tracer round out the Offense hero meta, and Junkrat and Hanzo join from the Defense category.  For Tanks, D.Va is still the most popular, nearly twice as popular as any other tank.  The remaining three tanks in the meta (Reinhardt, Winston, Zarya) are all seeing similar amounts of play at around 30% usage.  As in other tiers, Mercy is the queen of support heroes, with Lucio, Zenyatta, and Symmetra being off-support picks. 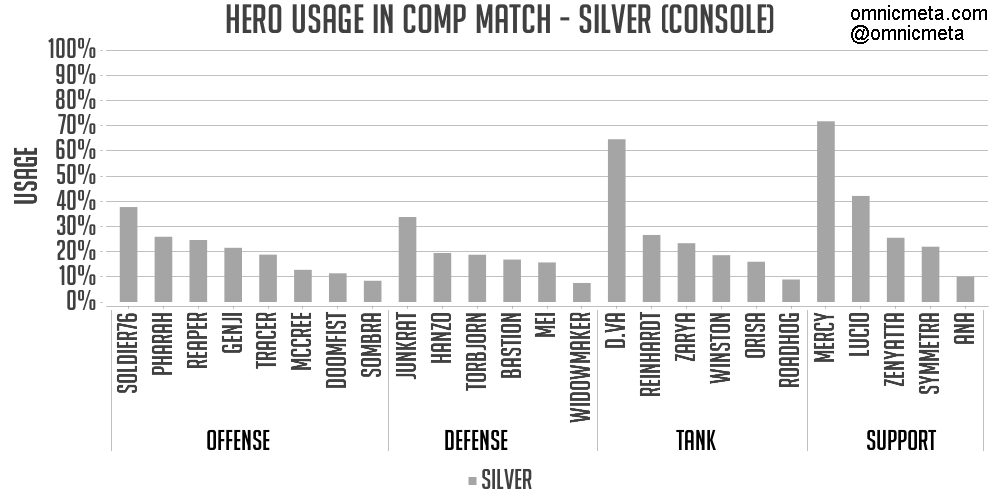 Silver tier is undergoing some major shifts this report.  For DPS heroes, there has been a continuing trend towards defensive heroes, a shift that may be a response to the large number of high-mobility heroes being played in the game.  Regardless of the reason, Junkrat (+3%), Torbjorn (+3%), and Mei (+2%) all rise in usage this week.  Junkrat's rise puts him within range of overtaking the #1 DPS hero Soldier (-4%).  Offense heroes down in usage across the board with Pharah (-3%), Reaper (-2%), and Tracer (-2%) falling significantly.  Tank play is much more mixed, as most popular tank D.Va actually rises +5% in usage this report.  She is clearly the most popular tank, with other tanks being nearly two tiers below her in play.  For supports, Mercy and Lucio remain the most picked. 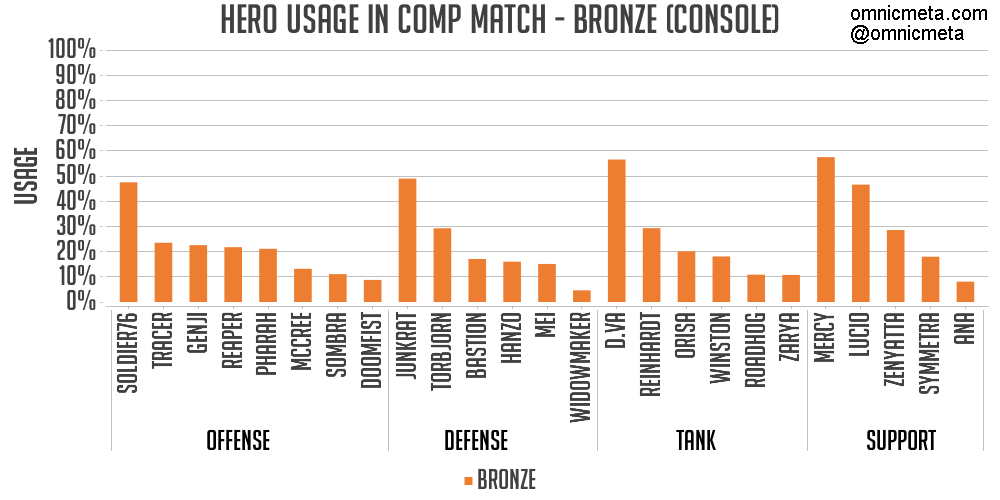 Bronze continues to be the tier where there are the biggest shifts between reports.  This week, Tracer (+8%), Torbjorn (+5%), and Junkrat (+3%) are the DPS heroes seeing the biggest increases in play.  Junkrat, Soldier, and Torbjorn have solidified themselves are the most popular DPS heroes by far.  Out of all the tiers, Bronze players appear to be the least impressed with Doomfist, as he is being played at around 8% usage.  Tank play remains mostly unchanged, with D.Va being the consensus pick in competive play.  However, Reinhardt (+4%) appears to have taken a significant chunk of play from Zarya (-4%), so solidify himself as the #2 tank.  Popular support heroes remains the same this week, with Mercy and Lucio being the two most popular heroes.  However, a significant bump in Zenyatta usage (+8%) has him close behind.