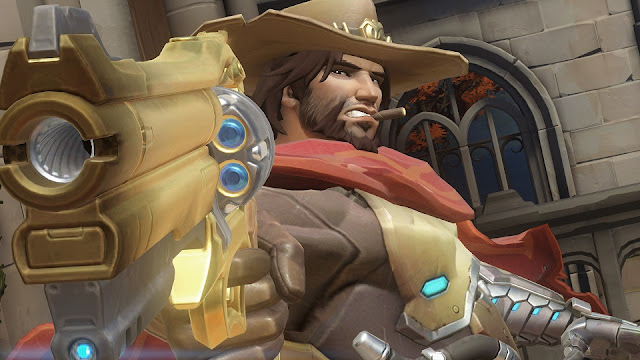 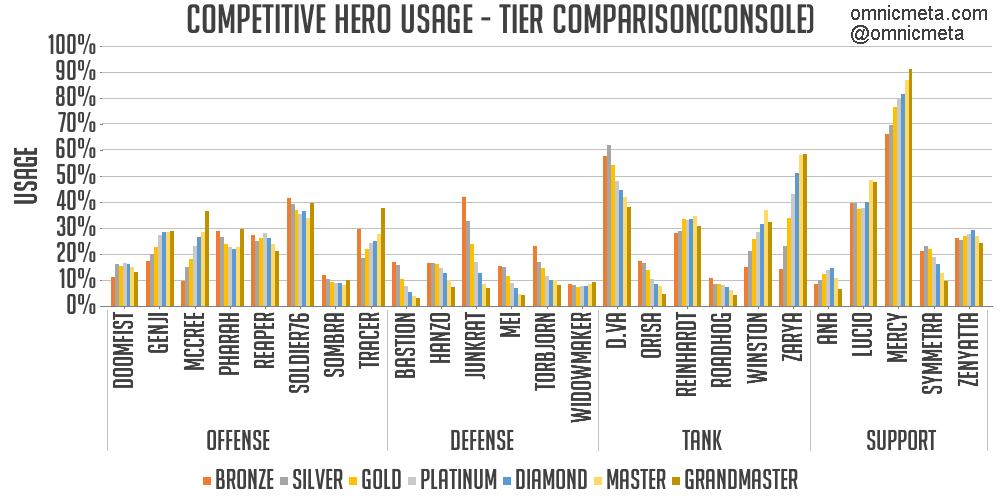 The above chart shows the hero usage in the final weeks of Season 5 on Console.  There are some new trends and continuing trends that are definitely worth talking about this report.

First, the (lack of  big) impact from Doomfist. While a popular hero on PC (both in casual and professional play), Console players do not seem to have found a place for him yet.  He is currently the 2nd least played Offensive hero, sitting around 11% to 16% usage and only ahead of little-played Sombra.  While the exact reason is unclear, one thing is certain: Doomfist is a high-skill floor hero with low health and a large hit box.  Though Doomfist can provide high burst damage and oneshot kill many heroes in the game with his Rocket Punch, his movement (Rocket Punch, Seismic Slam, and Rising Uppercut) can be hard to control and manage.  It seems most likely that Console players simply haven't had enough chance to figure him out yet.

With Doomfist's introduction, his hard counter McCree is rising in play.  McCree's recently flashbang can immobilize and stun heroes, enabling quick shots to finish off flankers and other mobile heroes.  His improved Deadeye ultimate ability has also enabled him to get quick picks on enemy heroes such as Pharah and Mercy as well.  With McCree's fortunes on the rise, we have seen a significant fall in Reaper play.  Reaper continues to be a strong hero, but requires close range attacks on vulnerable heroes, which is not easy against Doomfist, and shielded heroes.

Speaking of which, Zarya and Reinhardt's popularity continues to soar while D.Va and Winston fall.  In a continuing trend for the past month, Zarya's shields have great utility in protecting many heroes, and her recently improved Graviton Surge ultimate ability is much more effective as heroes can no longer escape.  The patch 1.13 bug fixes have also brought Reinhardt back as a solid place in the meta.  With more and more professional teams using Reinhardt, his fortunes will likely continue to improve.  As Reinhardt and Zarya increase in play, there is less room for D.Va and Winston.  Though D.Va remains the top tank at many of the tiers, the upcoming nerf to her Defense Matrix may continue to push her play down.

New and upcoming patches are something to keep an eye on for future meta changes.  The Patch 1.14 changes to Junkrat and Roadhog now on live servers are some of the biggest changes.  Junkrat is already quite popular in Bronze/Silver/Gold tiers, and we may see much more of him in the future, with a greatly buffed Riptire ultimate and bigger burst damage from double Concussive Mines. Roadhog is a former popular off-tank that was nerfed hard, but his buff to self healing (ability to move while healing, take 50% less damage) may be enough to help bring him back in to the meta.  While supports in general haven't seen much change this week, the increased vulnerability of D.Va and popularity of Reinhardt may help push unpopular Ana back into the meta.  The resurrect and other changes to Mercy currently on PTR Patch 1.15 servers are somewhat of an unknown, and may either soldifiy or greatly decrease her play (in lieu of Ana/Lucio/Zenyatta).

The big gainers this week vary depending on tiers, but a few common heroes stick out.  For the second stright report, Zarya and Reinhardt are some of the biggest gainers.  Patch 1.13 continues to help turn their fortune around.  With big changes to D.Va coming, Reinhardt may continue to find his way back into the meta.  A big surprise this week is McCree, who gains significant traction in Grandmaster, Master, and Platinum.  With the big increase in Doomfists running around, McCree's flashbang hard counters him and stops him in his trackers.  Junkrat also makes an appearance in as a top 2 mover in Gold/Platinum, while Mercy/Pharah are up more than 8% in Bronze.

For well over a month since Patch 1.13 was released, we have seen D.Va and Winston greatly drop in play.  That downward trend for those two heroes continues this report, especially for the higher tiers.  With the big D.Va rework currently on PTR server with a greatly nerfed Defense Matrix, we may see D.Va continue to drop for the forseeable future.  In lower tiers, Lucio is also consistently seeing less play, and Junkrat drops big in Bronze. 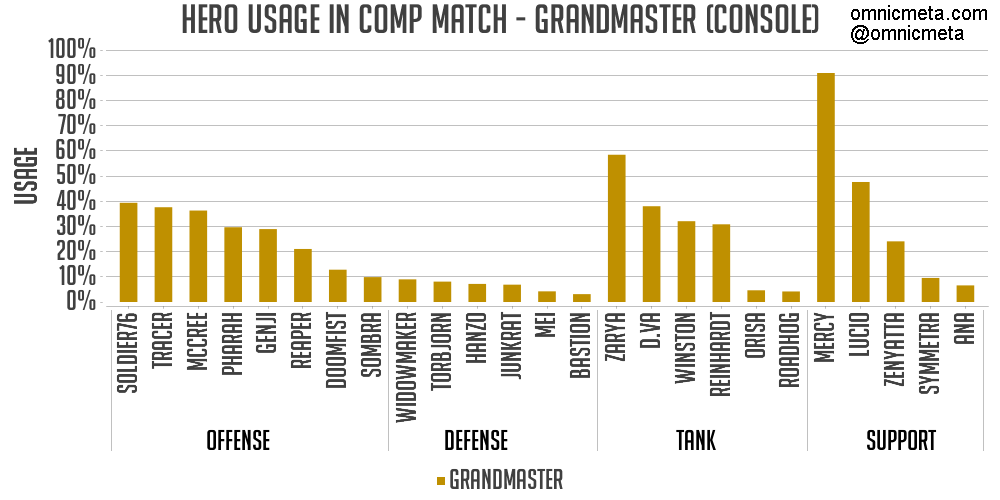 Offense hero play has changed greatly, as McCree (+7%) moves up big and becomes one of the top 3 most played DPS heroes at Grandmaster. With Doomfist being played (although only slightly) McCree is especially strong.  With Reaper (-5%) play falling off, the main 5 DPS heroes include Soldier (+2%), Tracer (-3%), McCree, Pharah (+3%), and Genji.  Doomfist is one of the least popular DPS heroes next to Sombra and Widowmaker.  Tank play in general has fallen this report, with only Reinhardt (+5%) the only tank hero gaining significantly.  Zarya (-5%) remains the most popular tank by far, with D.Va (-7%) and Winston (-7%) falling fast and giving way to a rising Reinhardt.  For supports, Mercy (+6%) sees a big bump, pushing her play well above 90%.  For second support picks, Lucio (-3%) and Zenyatta (+2%) remain popular. 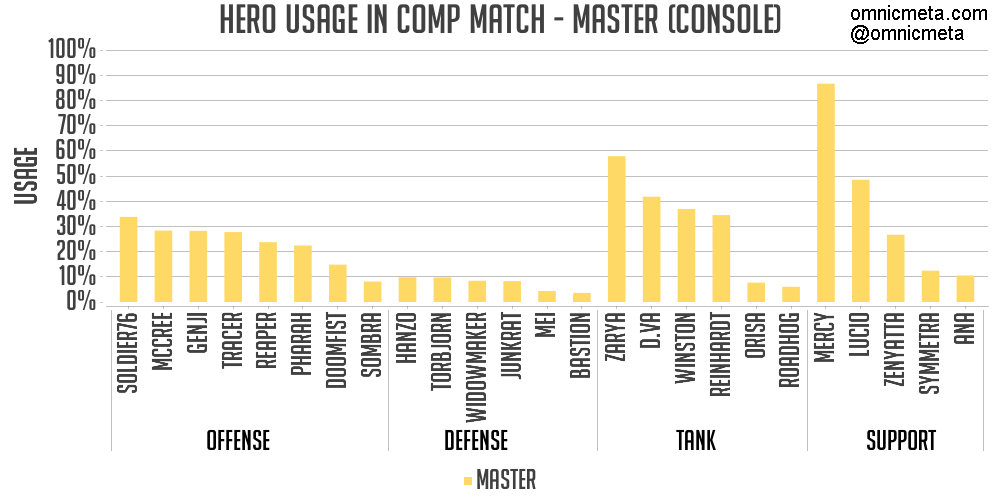 Master tier sees a similar trend to Grandmaster, where McCree (+3%) has risen in play - and is now the 2nd most popular DPS hero.  Formerly popular heroes are on a downward shift, as Reaper (-5%), Genji (-2%), and Soldier (-2%) are on the decline.  There are a solid six DPS heroes that appear to be viable, but Doomfist remains far behind in play and is not a big part of the meta.  In the tank category the big change is the rise of Reinhardt (+7%) and fall of D.Va (-6%) and Winston (-5%).  Reinhardt will likely soon overtake those two tanks and solidify himself even in the meta.  None of the support heroes see any major changes this report, as Mercy is still the #1 most popular hero overall and Lucio and Zenyatta compete for the second slot. 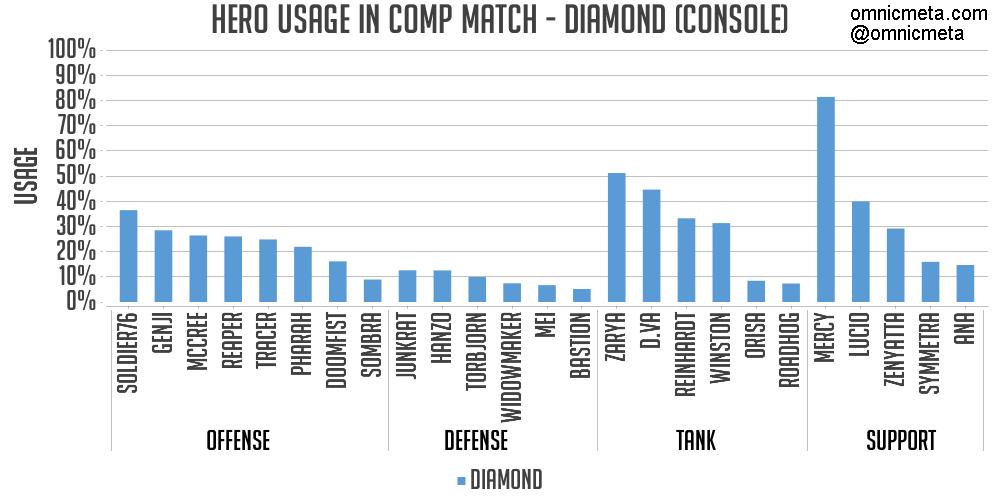 DPS play at Diamond sees a few changes, though Soldier remains unchanged as the #1 DPS hero in the tier.  McCree sees a +3% uptick this report, pushing his popularity to the #3 DPS slot.  Reaper (-3%) and Tracer (-2%) have fallen considerably in play.  The fall of D.Va/Winston and rise of Reinhardt/Zarya continues.  Zarya (+4%) eclipses D.Va (-7%) this report to take over the #1 tank spot, while Reinhardt (+4%) and Winston (-5%) have also exchanged positions.  All four tanks are being heavily played in the current meta.  Some minor changes in support play as Mercy play has increased by +2% and Lucio play decreased by -3%.  Mercy remains the most popular support, followed by Lucio and Zenyatta. 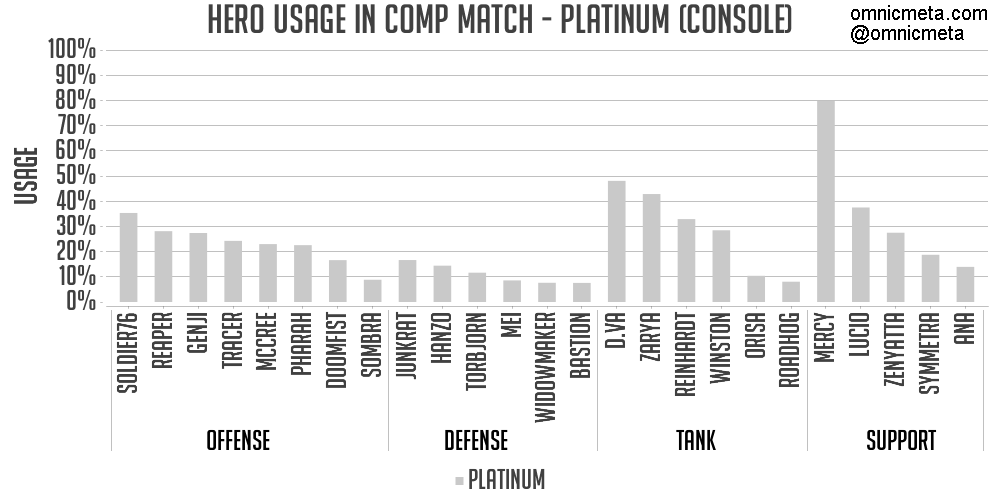 For DPS heroes, Soldier remains the most popular hero in Platinum, unchanged from last report.  The biggest changes are McCree (+3%) seeing increased play, and Reaper (-2%) seeing less play.  All in all, there are quite a few DPS heroes that are viable and active in the meta.  Tank play is evolving quickly as D.Va (-5%) and Winston (-4%) fall in play while Reinhardt (+2%) and Zarya (+2%) rise.  It is reasonable to expect that Zarya will soon become the most popular Tank in Platinum, and we may also see Reinhardt eclipse D.Va in the future.  For now, popularity for the four heroes remains close.  There is little change in support play, as Mercy remains the top hero by far.  Lucio (-2%) and Zenyatta (-2%) are still popular but drop a bit this week. 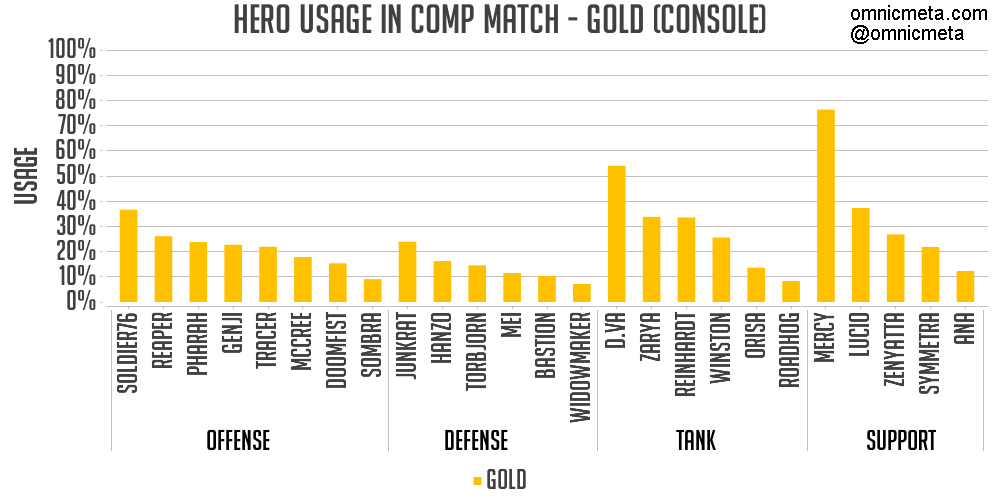 Soldier continues to the most popular DPS hero in Gold.  Coupled with a -3% drop in Reaper play,  Junkrat's +3% increase in usage makes him one of the most popular DPS heroes in the tier.  Besides a minor uptick in McCree (+2%) play, DPS heroes roughly remain the same this report,  with Pharah, Genji, and Tracer rounding out the most popular heroes.  Tank play continues to revolve around D.Va (-4%), though she once again experiences a decline in play.  Reinhardt (+3%) and Zarya (+3%) are up in play again, pulling away from formerly popular Winston (-3%) and into clear position as the 2nd tank picks after D.Va.  Supports see little change over the past report, with Mercy remaining the clear favorite and #1 overall hero in Gold.  Lucio (-4%) is down significantly in play but remains highly picked, as does Zenyatta. 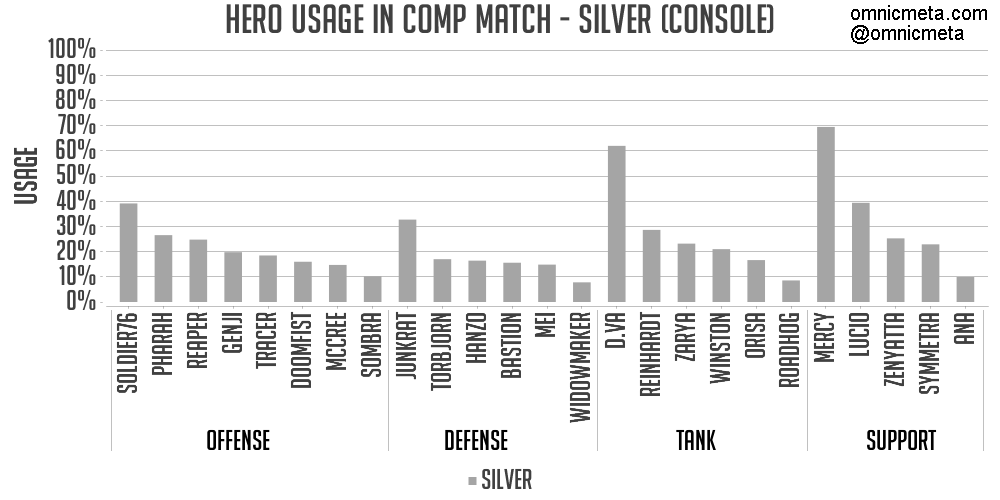 Soldier and Junkrat don't see any change in play and remain the #1 and #2 most popular DPS heroes in Silver tier.  Other DPS heroes remain mostly the same as last report, with the #3 and #4 heroes Pharah and Reaper seeing no change in play.  D.Va (-3%) remains the most popular tank by far despite continuing to trend downward in play.  Reinhardt (+2%) and Winston (+2%) are seeing small increases in play, and are still competing with Zarya for the 2nd tank slot.  Mercy (-2%) and Lucio (-3%) are seeing slightly less play this report, but are still the most popular Support heroes in Silver by a big margin.  Zenyatta and Symmetra are still seeing significant play, but are clearly not as popular as Mercy and Lucio. 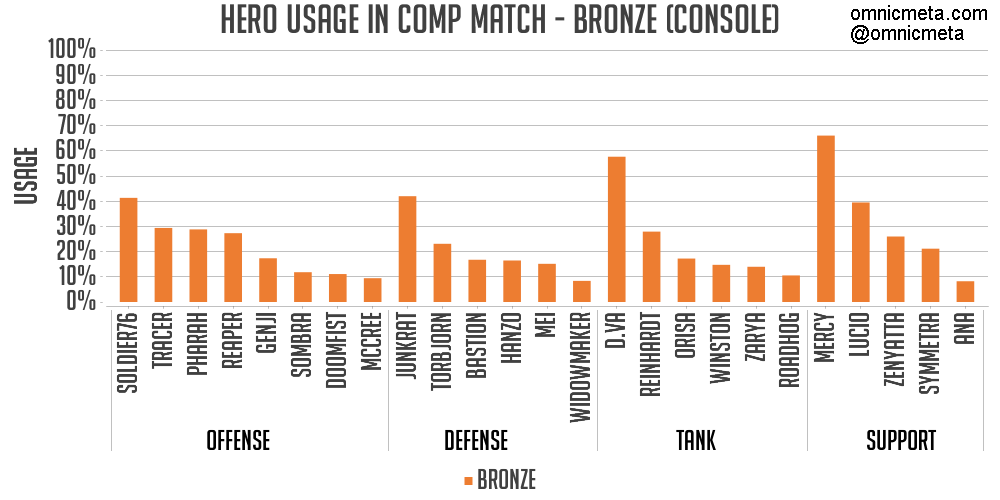 Junkrat falls -7% in usage this report but remains the most popular DPS at Bronze tier, narrowly eclipsing Soldier (who also fells 6%).  Pharah (+8%), Reaper (+6%), and Tracer (+6%) are the other DPS heroes that have surged in popularly and become a big part of the meta.  Torbjorn (-6%) and Genji (-6%) are the two previously popular DPS heroes that have fallen more by the wayside.  Tank play has seen some slight shifts, with D.Va (+1%) being the most popular tank hero by far, followed by Reinhardt (-1%).  The other tanks are much less likely to be seen in game.  Mercy sees a 9% boost in play, placing her once again as the most popular hero in Bronze tier.  With her rise Lucio has fallen greatly by 7% and down into a clear tier below Mercy.  The other support heroes remain roughly unchained this report.