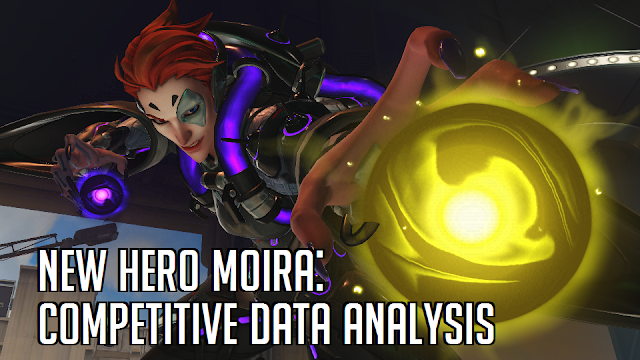 New support hero Moira has been available for Overwatch competitive mode for almost a week now.  She offers both healing and damage, but just how good is her kit in real matches?  In this article we dive deep into how good Moira is from data analysis perspective.

Patch 1.17 brought the 26th and newest support hero to Overwatch - Moira.  The answer to the broad community's request for another main healer, Moira has a very interesting kit.  She has a healing spray that requires charge to use; charge is granted by dealing damage with her weapon.  Moira also has a projectile orb ability that can either heal teammates or damage enemies, and an ultimate Coalescence that can damage and heal at the same time.

Below, we dive into Moira and how her kit plays out in real matches by comparing her to other healing supports: Ana, Lucio, Mercy, and Zenyatta.  Looking at statistics, we can visually see how big of an impact Moira is having in matches, and in what areas.  Given that much of her kit revolves around healing/damaging, we expect to see some interesting results.  The data represents current Overwatch play on PC. 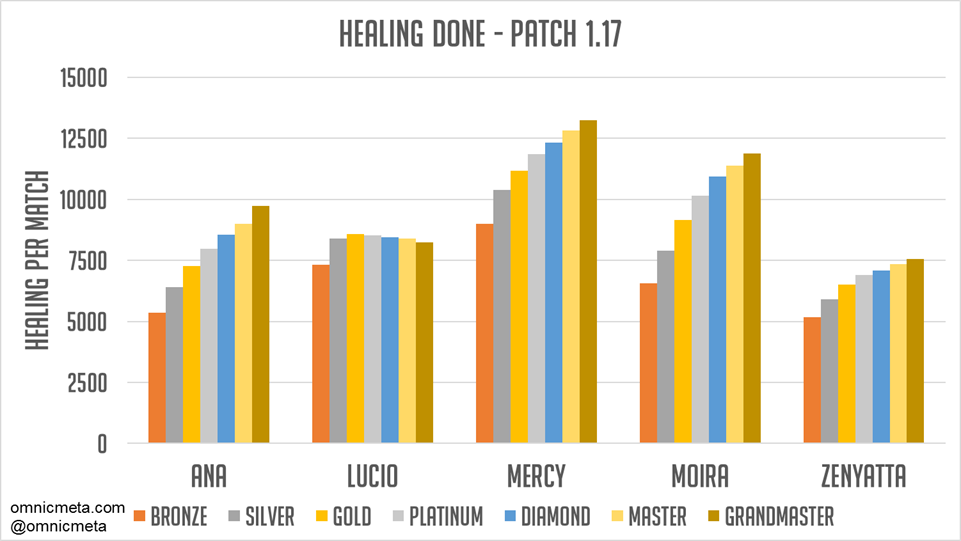 Moria has been presented as a main healer, so we first jump in and looking at how she compares against the other healers. The chart above present the average. It turns out that Moira is the clear #2 healer in the game right now, and competes with Mercy at the highest tiers.  The lone exceptions are Bronze and Silver tiers, where Lucio's healing song does consistent work.  Moira's healing is within 15% of Mercy and more than 25% higher than Ana at most tiers.  Keep in mind that Moira has only been available for less than a week; these healing numbers may continue to rise as players master her.  One thing is for sure, the limited healing charge of Moira does not seem to have restricted her ability to heal very much.

One thing to notice is the steep curve starting at Bronze and ending at Grandmaster.  The curve is even steeper than the Ana healing curve, and represents the high skill requirement to play Moira effectively.  It also may be that teams are more coordinated at the higher tiers, playing together to maximize her spray healing output. Another interesting data point is defensive assists, which are awarded when a support hero is healing a teammate when they get a kill.  Defensive assists can indict how active a hero is healing during team fights, relative to damaging.  Mercy is the clear metric here, as nearly all of her time is spent healing in Overwatch.  Based on the data, we see that Moira has nearly the same amount of defensive assists per match as Ana, and roughly 30% lower than Mercy.  So, we can see that Moira spends a lot of time actively healing during fights, similar to other support heroes. 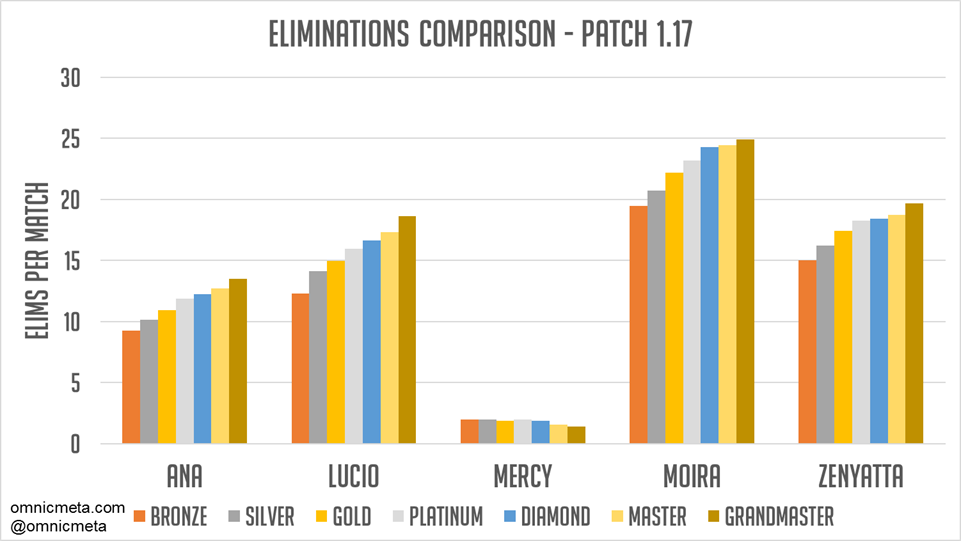 One of the most interesting parts of Moira's kit is the need to consistently be doing damage with her  long range weapon in order to refill her healing charge.  Many players are noticing Gold eliminations during a match, and the data completely supports this.  Moira's ability to secure kills is second to none among the supports, besting even "DPS" support Zenyatta.  Moira players are averagine 20 to 25 eliminations a match, putting her in the same range as other popular non-support heroes such as Junkrat, Roadhog, and Winston, while also getting significantly more eliminations per match than Symmetra. 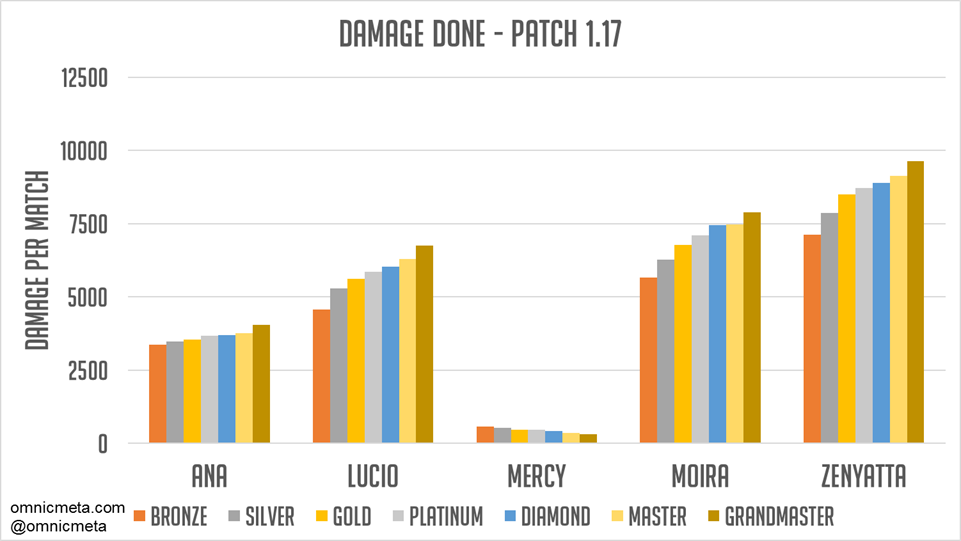 However, Moira's weapon damage output is fairly low - causing many to expect that she wouldn't have much real offensive impact in the game.  It turns out that her low weapon damage is trumped by the fact that she does not need precise aiming at all.  The enemy lock-on capabilities of her weapon are a very big deal, and as a result Moira deals much more damage than Ana, Lucio, and Mercy.  She's only behind Zenyatta - a hero that passively heals and can focus on dealing damage, while Moira must weave damage in with her healing.  Another way of looking at Moira's damage output - she is very similar Sombra (arguably a utility hero), and Winston.  From this data, we can see that Moira is definitely a real offensive threat. 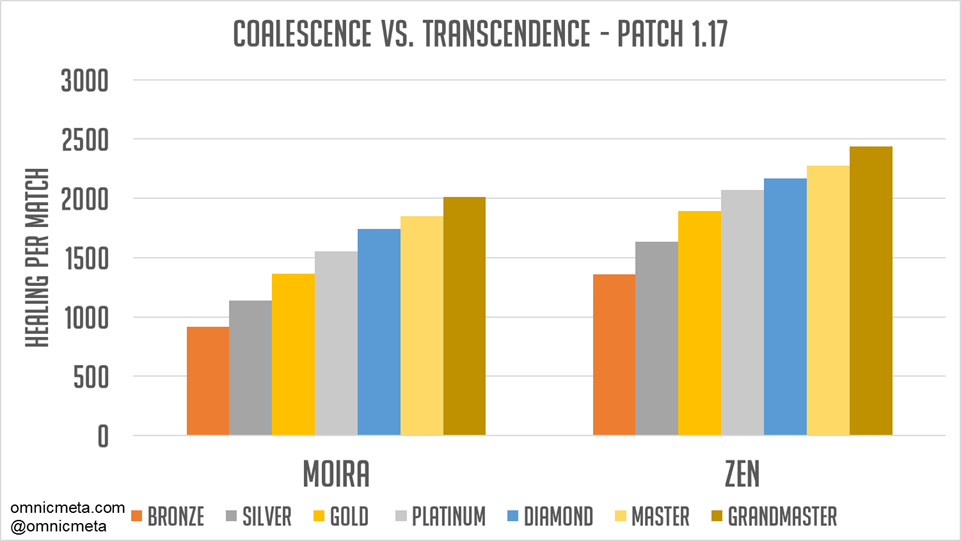 Overwatch players have been debating just how good Moira's ultimate ability Coalescence is.  One interesting comparison is Zenyatta's ultimate Trancendence.  As both ultimates heal (140 HP/sec for Moira, 300 HP/sec for Zenyatta), comparing both ultimates together can be helpful.  Though weaker on the surface, it turns out that Moira put outs a fairly similar about healing per match as Zenyatta, particularly at the higher tiers.  Moira's Coalescence healing output is with 20% of Zeyatta's.  This strong result can be primarily attributed the fact that Moira gets her ultimate much more frequently than Zenyatta. 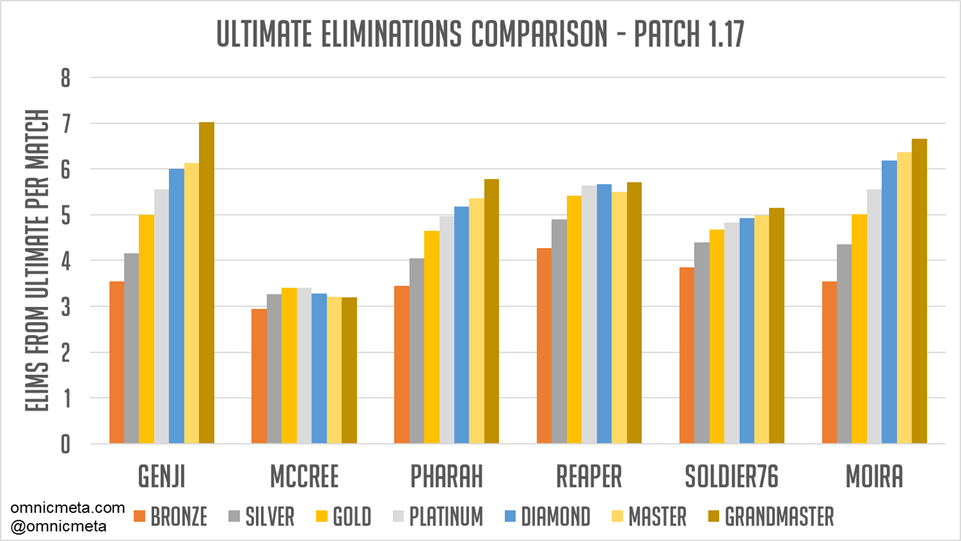 However, Coalescence can also damage enemies while healing, an ability similar to Ana's Biotic Grenade.  This is a very important part of the kit, as it enables the decision to be made to save your team or kill the enemy team - or do both at the same time.  In the above chart, we compare Moira's ultimate eliminations to familiar Offense heroes.  It turns out that Moira averages many Coalescence kills per match, netting roughly the same number of kills as many DPS heroes: Dragonblade, Rocket Barrage, Death Blossom, and high above High Noon and Tactical Visor.  While Moira's DPS during Coalesence isn't as high as those DPS ultimates, the impact each match appears to be similar.  That is to say, she may be enabling her team to win the fight rather than getting solo kills. 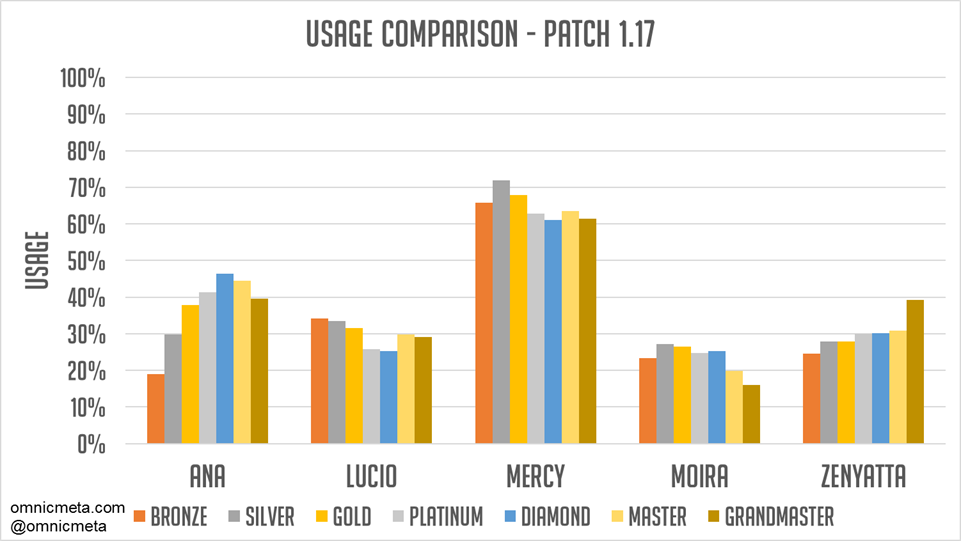 So how has Moira impacted the Overwatch Hero Meta so far?  Moira has made a pretty big splash overall and currently is on your team about 25% of the time.  Though, so far she has not made as big of a splash in Master and Grandmaster.  She is not yet a big part of the meta - that would be Ana and Mercy at the moment.  However, she seems to be played as an off-support, with similar usage to Lucio and Zenyatta.  Comparing her debut with other recent heroes, she is much similar to Ana's and Doomfist's debut than Sombra, and Orisa.  Doomfist was nerfed a short while after release, but it doesn't seem at this point that Moira is overpowered in the least.  From her performance stats, Moira is a very strong hero, with a high skill cap - and possibly team composition and map dependent. 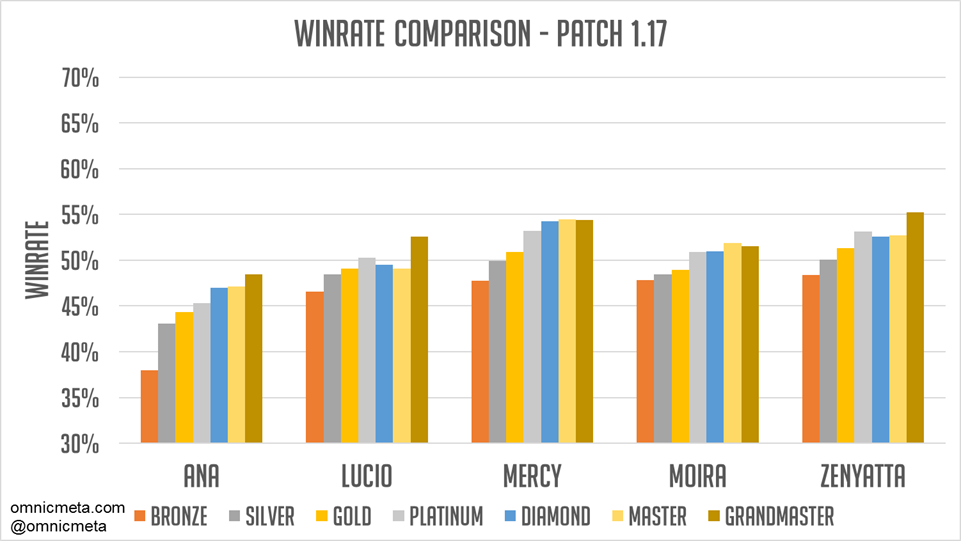 So are players having success with Moira?  Her winrates are roughly average for each tier, making her middle of the road for a support.  Mercy and Zenyatta continue to dominate with high winrates, and Ana is still quite below average.  The best comparison for Moira is Lucio, as she has slightly better winrates at the moment.  As mentioned before, Moira has been available for competitive play for less than a week, and it seems very likely that players will continue to master her and improve her average winrate.  Future Hero Meta reports will focus in on her winrate as time goes on.

The Overwatch team seems to have hit the nail on the head with Moira - a main healer than can have a huge offensive impact as well.  Moira has some clear limitations pointed out by the community - limited heal and damage range, needing teammates to play together, and heavy resource management.  Despite those challenges, in practice she shines when it comes to in game impact - even though players have no yet mastered her.  Moira is the #2 support in quite a few categories, approaching Mercy in healing and competing (and beating) Zenyatta in offensive categories.  Her winrates are also quite respectable, making her to appear to be not much of a liability in practice.  Looking at the current Hero meta, it appears as though players are generally choosing to play her as an off-support and choose Mercy/Ana for main heals - even though in many matches Moira will outheal those two heros.  All in all - Moira is a great hero that can be played successfully in the current meta.