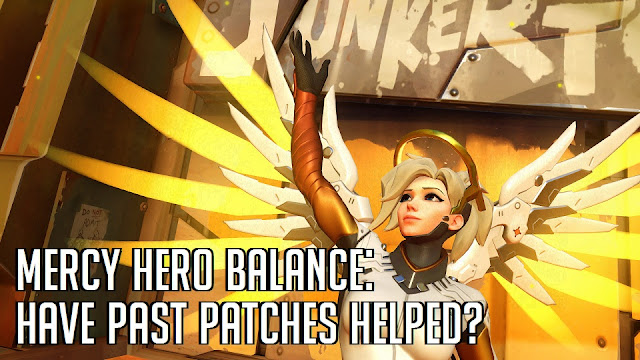 Perhaps one of the most controversial subject today, the kit change for Mercy in Patch 1.15 changed the face of competitive Overwatch from the competitive ladder all the way to the Overwatch League.  In this article we dive deep into what the affect of patch nerfs were, and what we can expect from the upcoming nerf to Valkyrie.

In Patch 1.14, before the Mercy Kit Rework, Mercy's ultimate ability allowed her to Resurrect any number of deceased players in a given area.  That hero design led to the undesirable playstyle of "hiding" when the Mercy had Resurrect available and trying to have teammates die in the same area.  Patch 1.15 was a kit rework, moving Resurrect to a regular ability on a 30 second cooldown, and introducing the new Valkyrie ultimate which allowed chain healing/damage boosting, added survivability, and up to 3 resurrects.  Patch 1.16 reduced the amount of extra resurrections during Valkyrie to a single teammates, while current Patch 1.17 added a 1.75 sec cast time to Resurrect outside of Valkyrie while making Mercy more immobile while casting.  Generally, the focus of Blizzard with the Patch 1.16, 1.17, and the upcoming patch has been reducing the impact of Resurrect.

Before we dive into charts showing Mercy's progression across patches - one stat that is incredibly important to mention is that Mercy's deaths per game has not changed at all.  Staying alive is incredibly important as Mercy, and patch buffs and nerfs to mobility and survivability only enable players to push the boundary and get more value out of her as a hero.  In other words, players play more aggressively after buffs and more passively after nerfs - and in a manner which allows them to maximize healing / resurrects while staying alive. 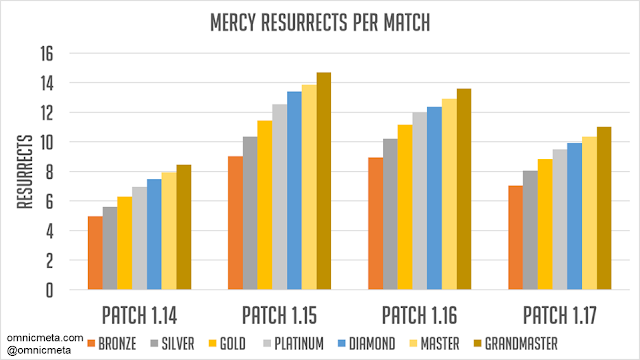 Resurrect - arguably the most controversial ability in all of Overwatch. We reported in the past that the kit rework in Patch 1.15 was a huge buff to Resurrect - up by +80% on average across all tiers of play.  The Patch 1.16 nerf from multiple Resurrects during Valkyrie to only a single extra charge of Resurrect had little effect, which indicated that 2 and 3 resurrects during Valkyrie were very rare anyways.  Patch 1.17 made Mercy vulnerable while casting Resurrect (outside of Valkyrie) by adding a long cast time.  This brought Resurrects down by -20%, but still much higher than in Patch 1.14.  So, after three Patches (1.15, 1.16, 1.17), Resurrect is still stronger than it has been prior to the Mercy rework.  This is obviously cause for alarm, and likely why Blizzard is continuing to focus on Resurrect nerfs. 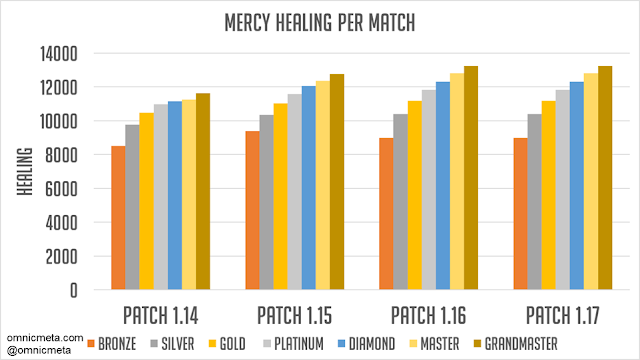 Mercy has always been known for having the highest effective healing output in the game.  After her kit rework in Patch 1.15, which included the addition of chain healing during Valkyrie, her average healing went up by around +10%.  By Patch 1.16, players had fully adapted to the Mercy changes were getting even more value out of her new kit.  In other words, her "bread-and-butter" and main strength as a support went up by large margin.  To put that in perspective, Soldier's buff from 17 damage to 20 damage per bullet was a +17% change and catapulted him into a must-pick position.  Similar to the boost in Resurrect, the boost in healing output makes it a no-brainer why Mercy has become so dominant in the current meta. 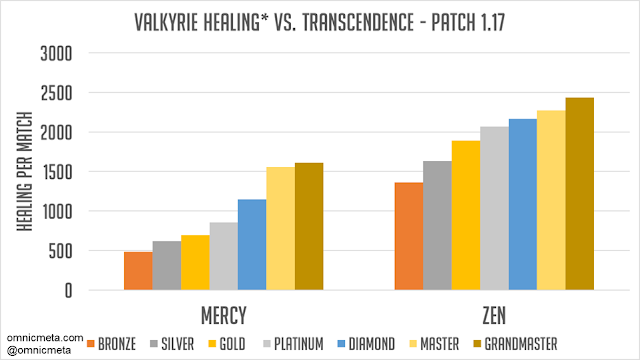 Many people have likened the healing output of Mercy during Valkyrie, and with good reason: the ability to chain heal allies in a given area at 60 health per second is similar in spirit to Zen's 300 health per second to allies around him.  The biggest difference is that Valkyrie lasts for a full 20 seconds, while Transcendence lasts only 6 seconds.  In theory, while the healing in Valkyrie won't be as good against burst damage such as Dragonblade or Tactical Visor, it lasts much longer to help sustain your entire team during long engagements.  As Blizzard doesn't provide Valkyrie healing statistics, we assume that the increase in healing after the Mercy kit rework (from the prior chart) can be attributed to the extra healing in Valkyrie.  The chart shows the estimate of per-match healing in the two ultimate side by side.  The numbers show that Valkyrie healing is actually quite substantial, and can approach Zenyatta's Trancendence.  Most importantly, players at high tiers are likely getting incredible value out of Valkyrie's chain healing - making it an very high value skill.  Arguably, the sustain from this high Valkyrie healing is at the crux of player complaints. 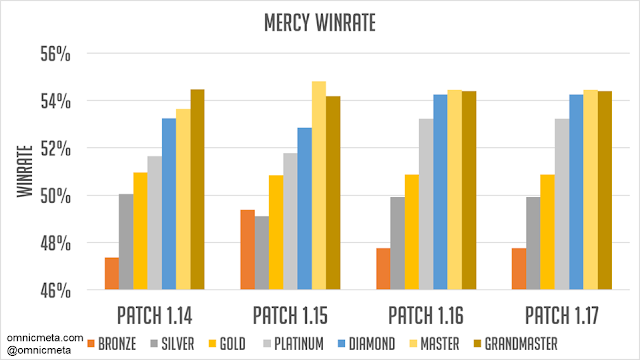 Finally we compare Mercy winrates across the patches.  Mercy has always been one of the successful heroes in the game, even well before her kit rework.  The high winrate makes sense, as she has always been the most consistent healer with high mobility.  After the patch changes, we do notice some trends.  At the lower tiers (Bronze -> Gold), Mercy was already being played heavily.  The buffs stemming from the kit rework in Patch 1.15  don't seem to have enabled lower tiers to be more successful with her.   On the flip side, we notice the winrates at Platinum, Diamond and Masters have gone up significantly.  We've already observed that players at the higher tiers are getting more value out of the changes, so the increase in Resurrects and Healing may be contributing to more wins as well.

What Can We Expect in the Next Nerf?

Players are currently waiting on the following changes to Valkyrie:

Starting with Resurrect, I think we may see that it finally gets adjusted to pre-rework levels.  The two Resurrects during Valkyrie currently can be quickly performed on nearly any fallen hero due to instant activation and super high mobility.  We saw in Patch 1.17 that a long cast time strongly encouraged players to not Resurrect players that were out of position - the next patch will make that true during Valkyrie as well. Coupled with the fact that extra Resurrect charge during Valkyrie is disappearing, we may finally see Resurrect is a good spot after all. The duration of Valkyrie is being shortened by 25%, which should also cut down on the healing impact quite a bit.  In general, you won't see the super mobile Mercy while she is ulting anymore, which means that she will have to play more conservatively.  The best guess is that Valkyrie becomes a healing-only ultimate, meant to proactively sustain pushes and win team fights.  Finally, Mercy has had some of the highest winrates in the game for a long while now.  While the upcoming changes nerf Resurrect quite a bit, we don't expect her winrates to dip much as she will remain the most effective main healer in the game.