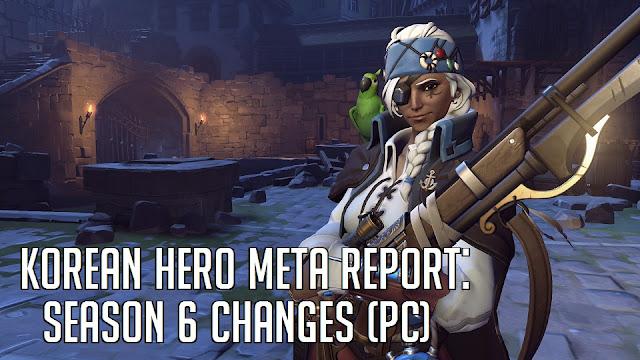 Patch 1.14 and Patch 1.15 completely changed the competitive ladder landscape for western servers (NA/EU) - Mercy, Junkrat, and even Roadhog have seen a big boost in play.  But what about the Korean server?  Korean Overwatch players have typically disliked Mercy and instead played Ana at very high rates.  Ana was appreciated for demanding high mechanical skill (aim) and so Korean players kept playing her even as Mercy was slowly buffed over time - but it appears that the most recent Mercy patch has changed that preference a bit.  In this article, we look at the hero usage for Korean server in Season 6 - and find some interesting developments.


For information on our data, see the About page.

The Korean Hero Meta in Season 6 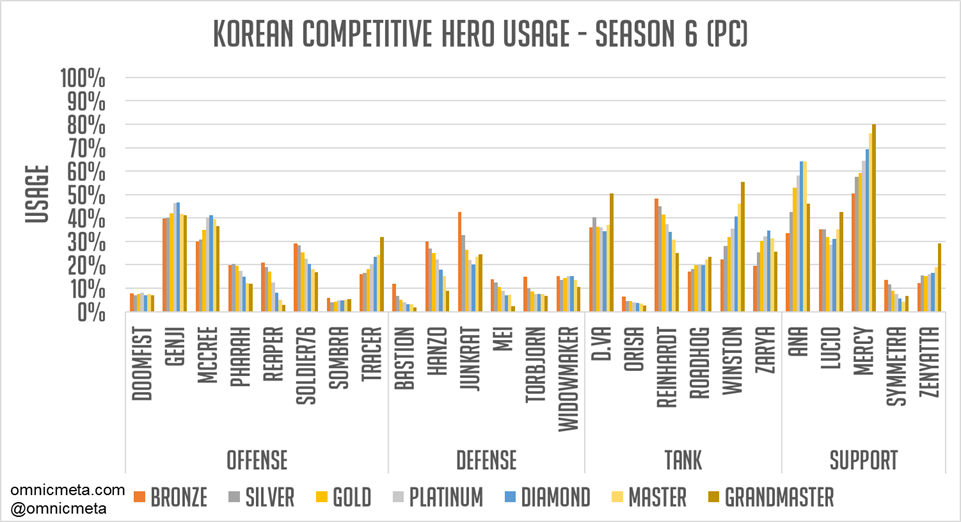 For this analysis, we look at hero usage for Korean (80,000 players) PC competitive ladder in Season 6.  The above chart depicts the hero usage across all the competitive tiers for KR server.

The offense category is still dominated by Genji and McCree as the two most popular heroes.  Since the end of Season 5, These high mechanical skill heroes are mostly gaining in popularity across all tiers of play.  Soldier retains most of his popularity, but is falling out of favor as McCree has gained in usage.  Tracer is still quite popular, particularly at Grandmaster, while Pharah and Reaper are more popular at the lower tiers.

Tanks in Season 6 has D.Va, Reinhardt, and Winston being the most popular tanks.  Reinhardt is most popular at the lower tiers, while Winston is seeing more play at the higher tiers.  Interestingly, Roadhog has not seen an increase in play from Season 5, despite his buffs in Patch 1.14, while D.Va has actually lost -5% usage on average after her changes in Patch 1.15.  While Winston has also lost about -5% usage, he still remains very popular.

The support category is the one that has seen the most change from Season 5.  Mercy has exploded in popularity after her big buffs in Patch 1.15, finally surpassing Ana in popularity across all tiers of play.  For a server that love Ana's mechanical demands and playstyle, this may come as a huge shock to some players.  Perhaps even more surprising is that players at the highest tiers (Grandmaster) are choosing Mercy much more often than the lower tiers.  Ana still remains very popular as a main healer, while Lucio is also seeing a lot of play. The chart above shows how much hero usage has changed since Season 5.

The three biggest gainers since Patch 1.14 and Patch 1.15 are Mercy, Junkrat, and McCree.  Mercy experienced great increases in popularity particularly at the highest tiers, where she jumped +26%, +45%, and +56% in usage at Diamond, Master, and Grandmaster tiers, respectively - and average of +22% usage across all tiers of play.  Regardless of server, all Overwatch players appear to recognize how strong Mercy is right now in her current state.  Junkrat has seen a +14% increase in usage on average, the biggest change of any DPS hero.  As mentioned before, Patch 1.14 brought him firmly into the meta.  Finally, similar to NA/EU servers, McCree has seen a bump in play - likely to help burst down Mercy (especially when in flying around in Valkyrie).

The three biggest losers since Season 5 are Lucio, Ana, and Soldier.  Players are leaving Ana and Lucio and playing Mercy instead - pointing to her incredibly strong state.  Nanoboost/Biotic Grenade and Sound Barrier/Speedboost aren't as attractive as Valykrie and Resurrect as a regular ability. Despite the significant drops, note that both heroes are still being heavily played in Season 6.  Soldier's drop may be a surprise to some, but it can be difficult for him to burst down a flying Valkyrie Mercy compared with McCree.  With the rise of Junkrat, Soldier in general has increased competition than ever before. 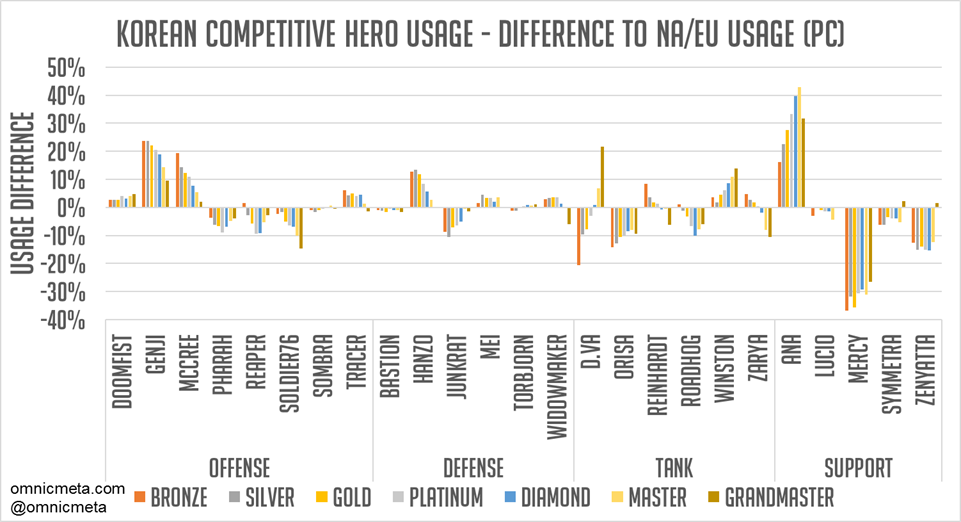 To finish off the look at the Korean hero meta in Season 6, we compare the difference in hero usage to NA/EU servers.  In the chart above, positive values indicate that the hero is being played more on Korean server, while

As we can clearly see, the current hero preferences are still much different between the East and the West.  For Offense heroes, Genji and McCree are much, much more popular in Korea - no doubt due to their high mechanical demands, which Korean players seem to appreciate.  Both Hanzo and McCree are more popular in Korea - possibly due to the Korean love of the headshot "dink"  Junkrat is more popular in the NA/EU by around 5% - probably due to an increase in competition for DPS slots.  For Tanks, Winston is more popular in Korea currently, while D.Va's is either more or less popular, depending on the tier.  Orisa and Roadhog are more popular in NA/EU.  Finally, Ana has 25% more usage in Korea, despite ceding incredible ground to Mercy - who is being played on average 30% less.  In other words, Korean players still have not completely taken to Mercy as the consensus 100% pick as NA/EU has.