Just How Good is the New Lucio? 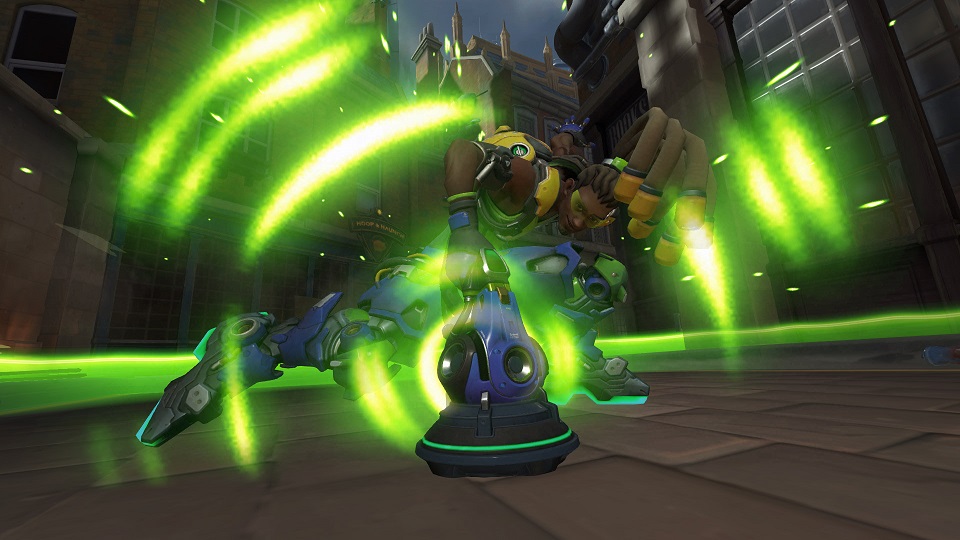 The new Lucio has been available for a couple of weeks now, but have the changes made him better or worse?  To help answer that question we collect average performance stats per competitive match for each of the tiers (Bronze->Grandmaster) and compare the new Lucio directly against the old Lucio and other supports.

Overwatch patch 1.10 brought major changes to Lucio's kit. You can see the full patch changes in the appendix at the end of this article.  Clearly, the biggest change is the healing and speedboost aura radius - which is now 11% of the original area.  That impacts the reach and potentially how many teammates can be affected by Crossfade songs.  We also see the damage and projectile speed buffs, which are clearly a net positive.

Have the Changes Affected Lucio's Value?

We are collecting data for competitive matches only (not quickplay).  We look at the per game stats by competitive tier for the Old Lucio (pre 1.10 patch) and the New Lucio (1.10 patch) and see what the effect the changes have on actual games.  We track the percent change (either positive for increases, negative for decreases) from the old Lucio for particular stats per competitive game. 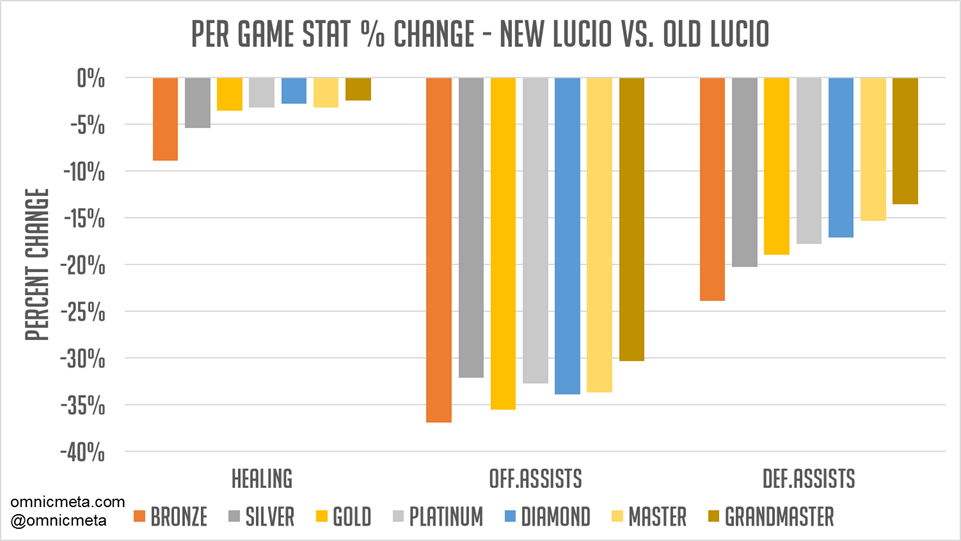 We start with how the change in Crossfade aura has affected the New Lucio. Shockingly, despite having an aura for Crossfade that is 11% of the size, the New Lucio is healing roughly the same amount per game as the Old Lucio.  Considering that some critics of Old Lucio were casting the hero as a "healbot" do to the previous large aura size, even with the much smaller aura size he is incredibly effective.  The smaller aura requires the New Lucio to pay more attention to where teammates are located, and requires teammates to be more coordinated and closer to the New Lucio.  This challenge in skill is represented by the larger drop in healing per game at lower tiers.  Note that as part of the 1.10 changes, the New Lucio is now able heal nearby teammates more quickly, which appears to also played a big role in maintaining healing performance.  The big effect of the smaller radius appears to be the number of teammates that are being effected by Crossfade.  Offensive assists have dropped by more than 30% and defensive assists have dropped by 15% to 20% across tiers.  Simply put, with a much smaller aura it is more difficult to keep your entire team inside the radius. 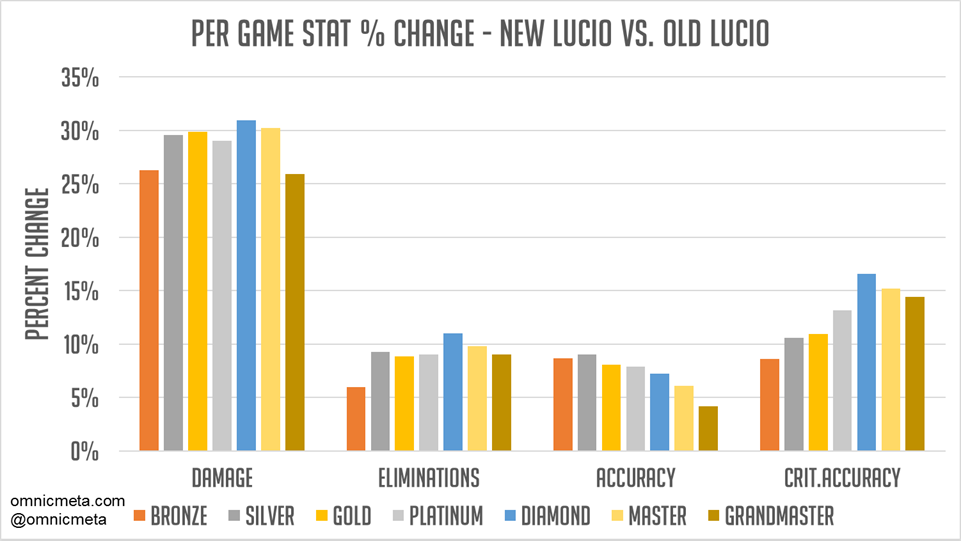 The damage and projectile buffs appear to have brought a pretty big benefit to the New Lucio.  Damage and eliminations per game have jumped considerably. Eliminations in particular are a good indication of how productive that damage is, and an elimination increase of 10% per game is a big deal. While the damage increase roughly reflects the patch 1.10 buff, for the vast majority of the tiers it has gone up more than 25%. This is likely due to projectile speed which has also increased, leading to much better accuracy and critical hit accuracy.  While accuracy has increased 10% in most tiers (~5% in Master / Grandmaster), critical hits have risen and astounding 10%-15%.

All in all, the changes appear to be a huge net buff. The aura changes for Crossfade haven't affected healing output very much, while damage and projectile speeds have made New Lucio much more impactful on the game. Intangibles, such as the wallriding speed buff can't easily be tracked with current statistics, but we can assume that they have also been a net positive for New Lucio.

Comparing Lucio to Other Supports

The new changes appear to have been a pretty big net benefit for Lucio.  But how does Lucio compare to other supports in terms of production?  To continue evaluating Lucio, we use the statistics for Eliminations, Damage, Healing, and Total Assists.  Those stats are averaged per game across the tiers. 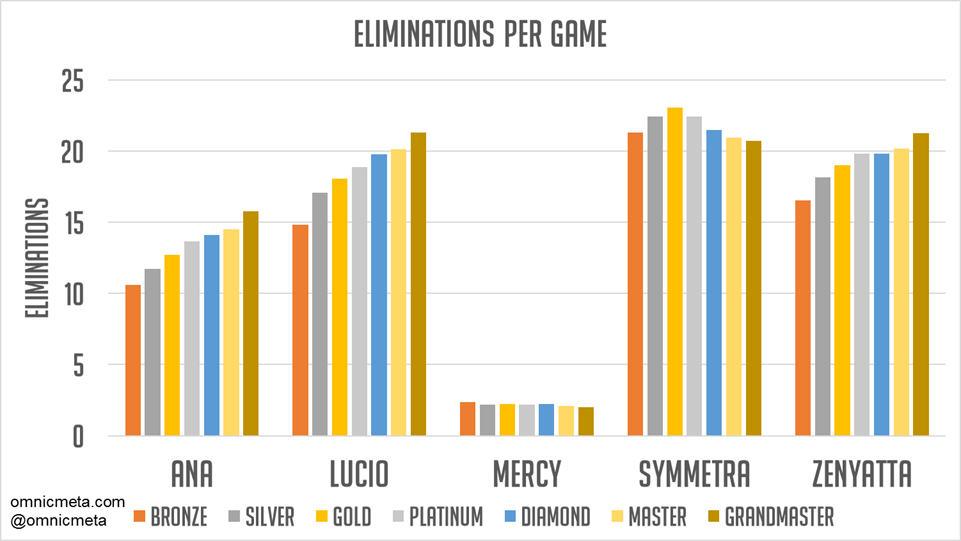 New Lucio is one of the best support heroes for eliminations per game.  If we don't count Symmetra (who isn't popular at high tiers), New Lucio only competes with Zenyatta for the support eliminations crown - and sometimes beats him.  This was not the case before the 1.10 patch, when his eliminations were 10% less. 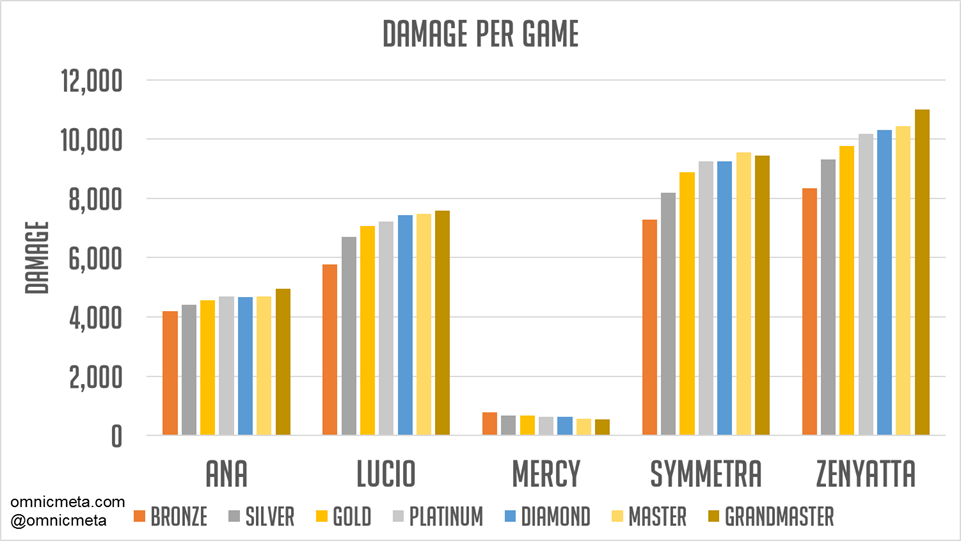 Despite the recent 25% buff to weapon damage, New Lucio falls significantly behind Zenyatta and Symmetra.  New Lucio puts out 30% less damage than Zenyatta, and 20% less than Symmetra across the tiers.  However, he provides 55% more damage per game than Ana, most likely due to his ability to simultaneously use his weapon while healing. 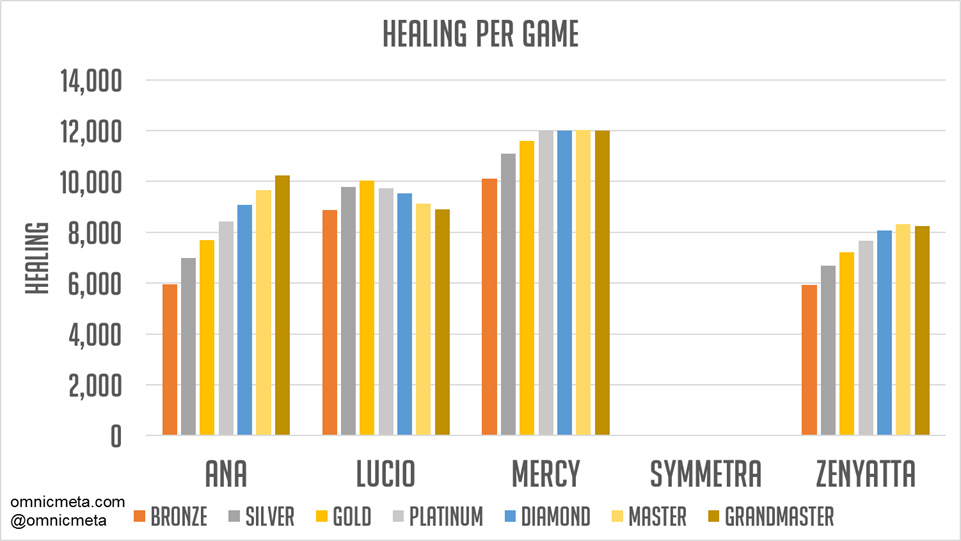 New Lucio remains one of the best healers in the game.  Despite not having the burst healing of Ana or the single target healing of Mercy, Lucio provides the #2 or #3 most healing in Overwatch.  Note that New Lucio's healing is consistent across the tiers, and much higher than Ana or Zenyatta in tiers Bronze -> Platinum.  Symmetra doesn't have the ability to heal, thus her healing statistic is zero for all tiers. 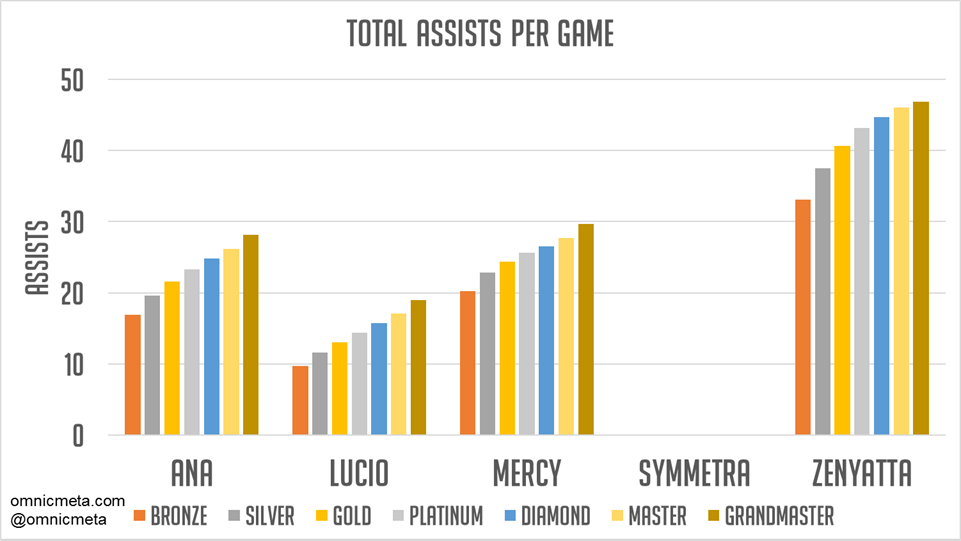 In terms of total assists (offensive and defensive combined), New Lucio appears to be the least impactful support hero across all the tiers.  Note that assists for New Lucio involve keeping teammates inside the aura during battle, which is especially dangerous given its decreased radius.  That said, considering that New Lucio's healing has not decreased significantly, its unclear whether this low number of assists indicates a negative change for New Lucio.  Assists are not currently tracked in Overwatch statistics for Symmetra, thus her assists statistic is zero for all tiers.


So How Good is Lucio Right Now?

TLDR - Lucio has been made even better with the latest changes, but with the caveat that the reduced aura for Crossfade requires more careful positioning for effectiveness.  The changes increase his skill cap, so that top tier players will be able to get even more out of him, as evidenced by the new wall riding buff and better accuracy from faster projectile speed.  Lucio easily remains one of the best heroes in the entire game of Overwatch, and his popularity may even increase due to this net buff.