Just How Good is Orisa? 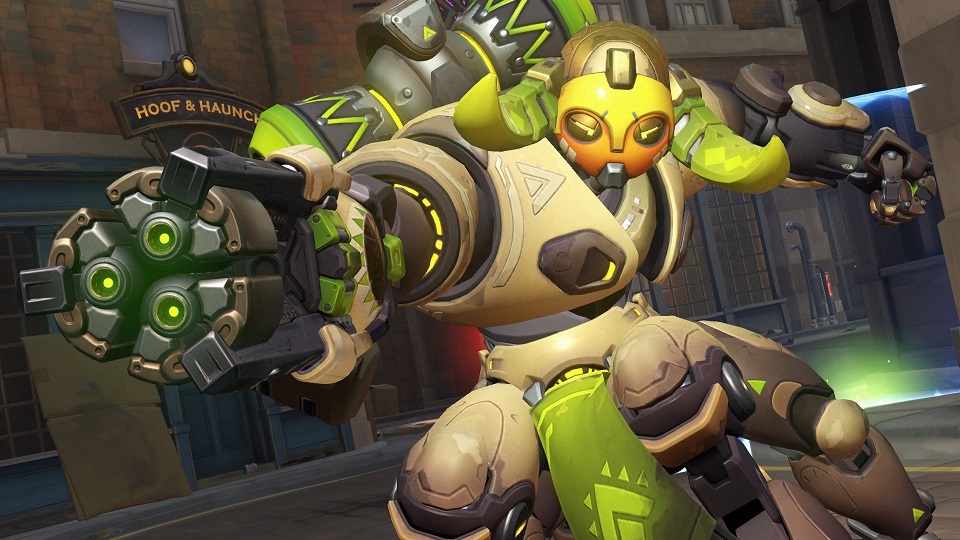 Orisa has been out for a few weeks now, but just how good of a hero (and tank) is she for competitive Overwatch? To answer that question we collect average performance stats per competitive match for each of the tiers (Bronze->Grandmaster) and compare Orisa directly with the other tanks. For those of you that haven't played much Orisa, the results may quite surprising.

Disclaimer: We are collecting data for competitive matches only (not quickplay). While there are several limitations to comparing stats, the biggest one for this article is that we do not currently have a way to collect data on what maps the heroes are being played on. So, comparing Tank success on assault / capture point / payload / hybrid maps is not possible. We also are not keeping track of ultimate abilities in this analysis.

Have we reached Orisa's Potential Yet?

There is some interesting data that we can look at to help see if, by Blizzard's opinion, players have reached Orisa's potential. The "on fire" metric is one that is used by Blizzard to determine how well a player is doing. There are a number of things that factor into being on fire, including elims, using hero abilities, and even spending time on the objective. As Blizzard uses "on fire" as a metric to compare players, we can also use it as a metric to compare Orisa with other Tanks. If people are not playing Orisa to the standard that Blizzard expects, we expect to see Orisa players to spend less time on fire than other tank players. 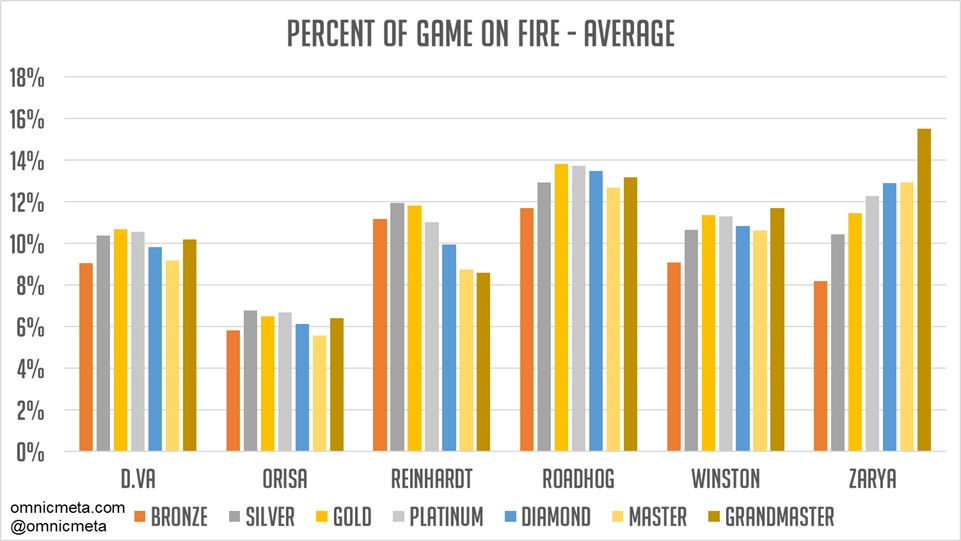 The above chart shows the average percent of game time on fire for each of the tanks by competitive tier. Interestingly, most of the tanks hover around the 10% - 12% mark for each tier. Orisa, on the other hand, is at a measly 6%. This is a pretty significant difference between Orisa and the rest of the tanks. This would seem to indicate that Orisa players have not hit their stride yet - at least according to Blizzard.

Comparing Orisa's Stats to Other Tanks

So players are still continuing to figure out how to play Orisa. But how much impact is she having right now? To continue comparing Orisa to the other Tanks, we use the statistics for Eliminations, Deaths, Damage Done, and Damaged Blocked. Those stats are averaged per game across the tiers. 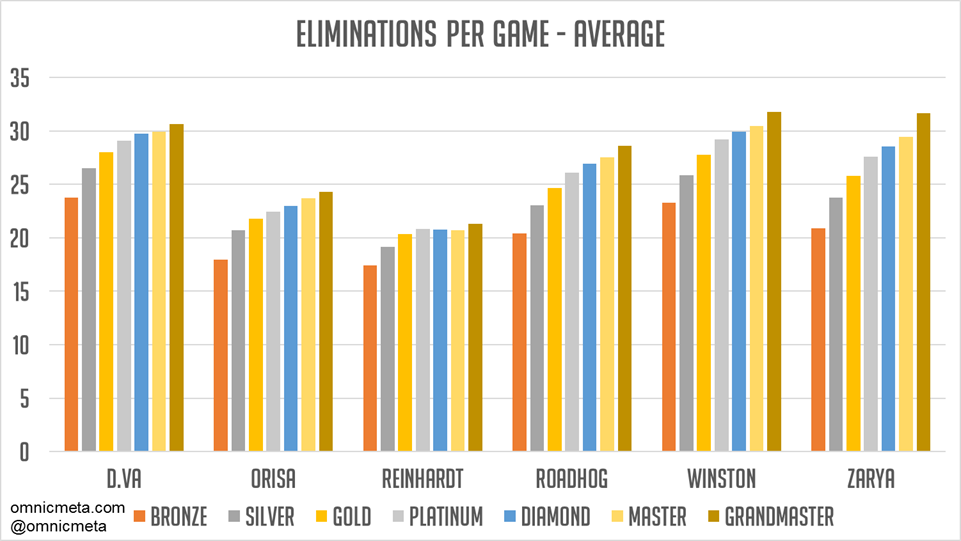 Eliminations generally show how much a hero contributes to removing opponents from the fight. We find that Orisa is averaging 20-25 eliminations per game, significantly less than all other tanks with the exception of Reinhardt. Keep in mind that Rein's primary occupation is holding his shield up, and while he is doing so he can't damage or kill. So, why is Orisa not getting eliminations? It's not really clear, but we can guess that player skill is at least partly to blame. Orisa's primary fire is a slow projectile weapon unlike any other in the game, and her alternate fire ("halt" gravitron charge) is good for both getting environmental kills and confirming kills on low health targets. Considering the high skill and game awareness needed to use her weapon, it is very likely that players will continue to increase their eliminations per game. 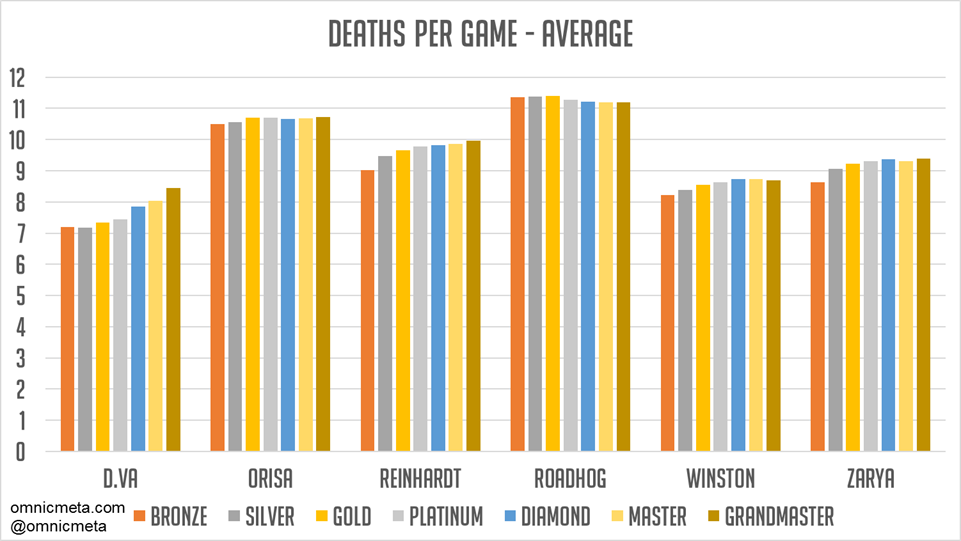 It also turns out that Orisa has some issues with survivability compared with other tanks. In terms of deaths per game, Orisa has the second most despite having a barrier and her damage reducing "fortify" ability. It is clearly a huge problem that Orisa dies so much and yet is a critical part of the team composition as an anchor tank. However, the biggest community complaint about her survivability (her large head critbox) was addressed on the Tuesday patch (15% smaller hitbox). We will see if that improves Orisa in the weeks to come. 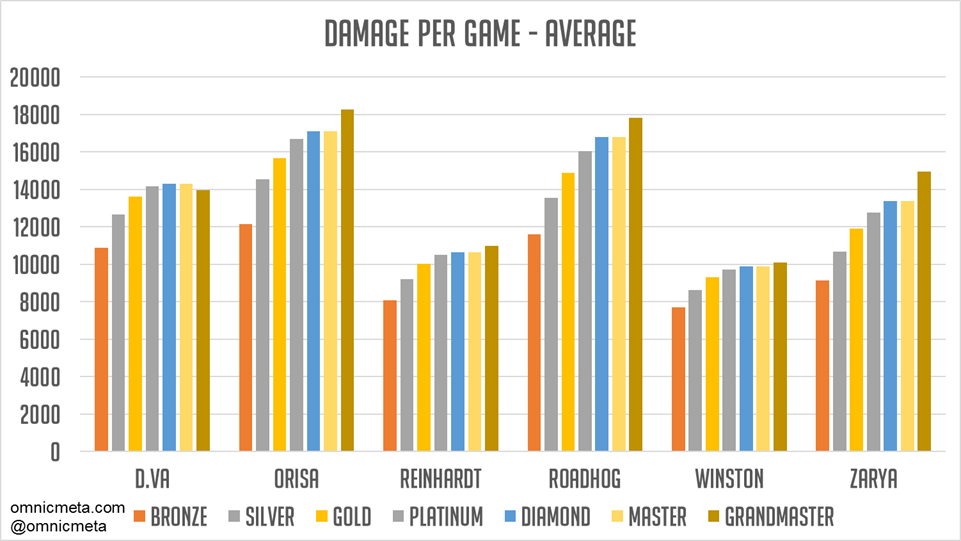 Currently, Orisa is putting out the highest damage per game out of all the tanks. This seems to make sense, as her weapon's high fire rate, extremely large clip, ability to headshot, and no damage falloff. While the projectiles themselves are slow, Orisa can still theoretically deal 144 damage per sec. However, when we consider how low her eliminations are per game, it doesn't appear that this damage is translating to kills. A possible explanation is that her weapon is primarily being used on shields. As roadhog is also useful in breaking Orisa/Reinhardt/Winston shields, this analysis seems to hold some weight. Winning the shield battle is an important task in competitive matches, and so Orisa appears to have some great utility there. There are other possible explanations for her high damage, as anecdotally her weapon seems to be useful for focusing higher health (and therefore larger hitbox) heroes due to projectile speed and spread. 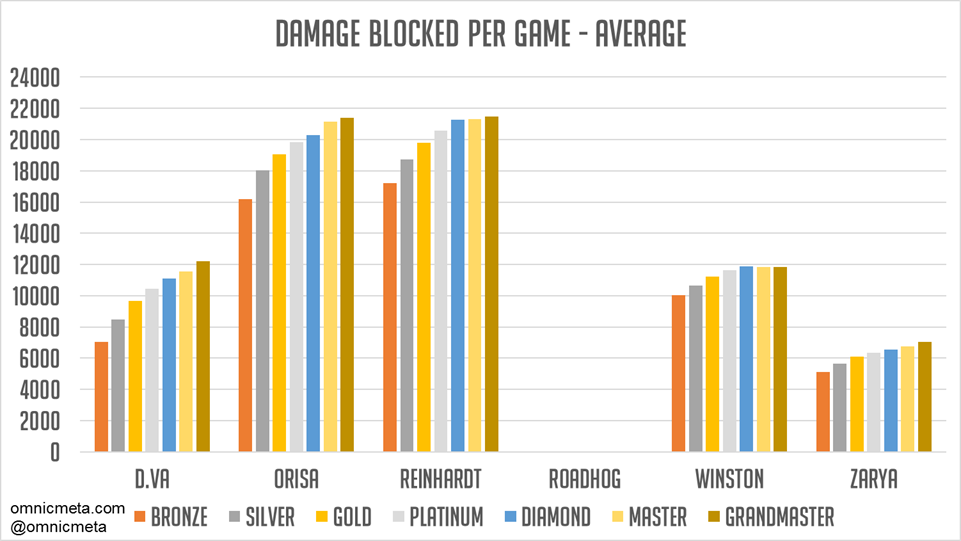 Blocking damage is one of the unique attributes that the Tank class provides (only Mei and Symmetra can also block damage). Providing a "movable" barrier is also a key ability of Orisa that is being pushed by Blizzard, and one of the reasons they are calling her an "anchor tank". Looking at the data, Orisa's Barrier seems to be providing a ton of value. She effectively is able to block the same amount of damage as Reinhardt. This is interesting, as her barrier is stationary and only 900 HP, compared with Reinhardt's movable/tiltable shield that has 2000 HP. It may very well be the case that the HP is high enough and cooldown short enough that Orisa is able to keep the barrier up as often as Reinhardt. We can also speculate that despite it's stationary nature, the size and shape of the barrier is enough to provide great value.


So Just How Good is Orisa Right Now?

Orisa is showing some really good numbers for a tank: the highest damage done and damage blocked among all the tanks. However, her impact on eliminations and her survivability seems to be somewhat poor. The great news is that players are still learning her kit and the best ways to play her. Player skill improvements along with the minor buff to her head critbox will likely continue to improve her strength as a hero. As it stands today, she seems competitive and viable.