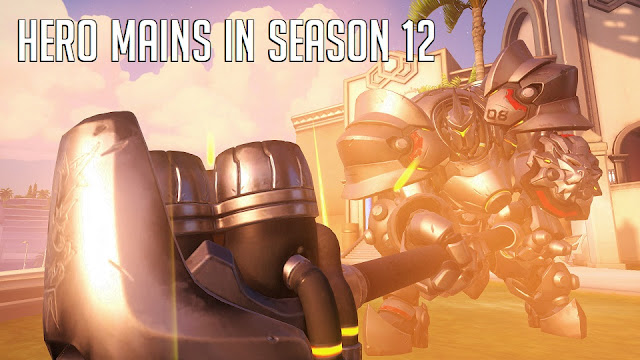 The biggest decision that Overwatch competitive ladder players have to make is which hero to play. Knowing the meta game and which heroes fit well is the big determining factor when it comes to deciding which hero to play. In this article, we analyze the popularity of hero specialization. A player has a "main" hero when that player plays more than 50% of all games with that hero, and is a "one-trick" when playing more than 80% of games with that hero. Using the data for hero usage collected in Season 12 for PC, I break down the most popular hero mains for each tier.  As always, enjoy!

With several of the latest patches, hero diversity has improved quite a bit.  Looking at the most recent meta report, Damage and Support hero play is spread across a number of heroes (though Ana is very popular at high tiers of play).  We have several comps in the meta, including GOATS, Dive, Quad-tank, among others.  Despite this relative meta diversity, it turns out that a large number of players are continuing to "main" and "one-trick" heroes.  I define a "one-trick" as a player that plays a single hero more that 80% of the time, while a player has a "main" if they play a hero more than 50% of the time.  Let's look at the data. 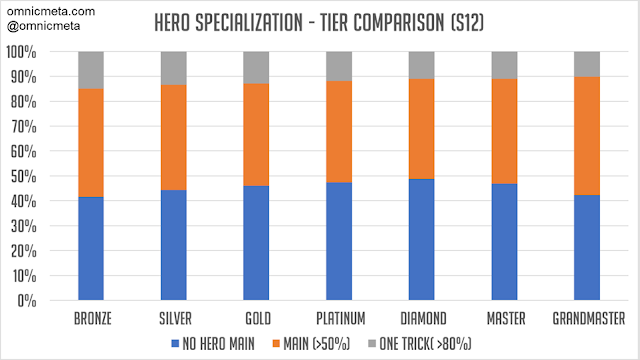 The chart above shows mains (>50% and < 80%) and one-trick (>80%) in the total pool of players in Season 12.  In general, about 55% of all players have specialized in a single hero in Season 12, with 12% of those players one-tricking a hero.  At the highest tiers and lowest tiers, specialization is even more pronounced, with nearly 60% of players specializing in a single hero. In other words, if you are not specializing in a hero in Season 12, you are in the minority. 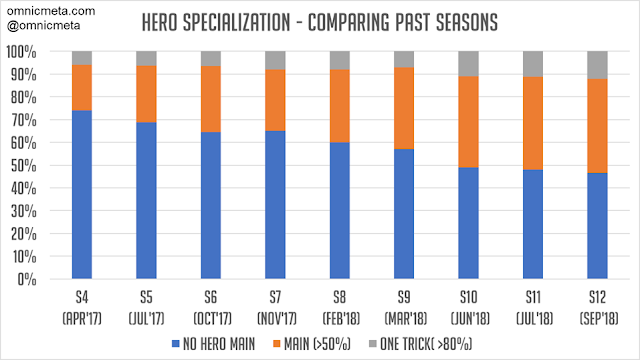 The number of players specializing in a single hero continues to grow over time.  The chart  above shows how hero specialization has evolved since I started tracking it in Season 4 (about 18 months ago).  In Season 4, only 25% of players were specializing in a hero, but now around 55% of players are specializing.  It's been a relatively steady increase, though Season 12 (Mercy/Rein/Hanzo/Zarya) saw a big boost.  As if the big growth in specialization wasn't enough, during that same time period the number of heroes available to play increased from 24 to 28.  There's a number of reasons why this is happening, but let me put forward a few theories.  First, players may be realizing that specializing in a hero is a proven way to get really good at the hero - you simply need to put time into the hero to improve (and possibly climb).  Similarly, players may be developing strong comfort picks when it comes to both team compositions and ladder play.  Whatever the reason, most players appear to have found a hero they focus on playing. 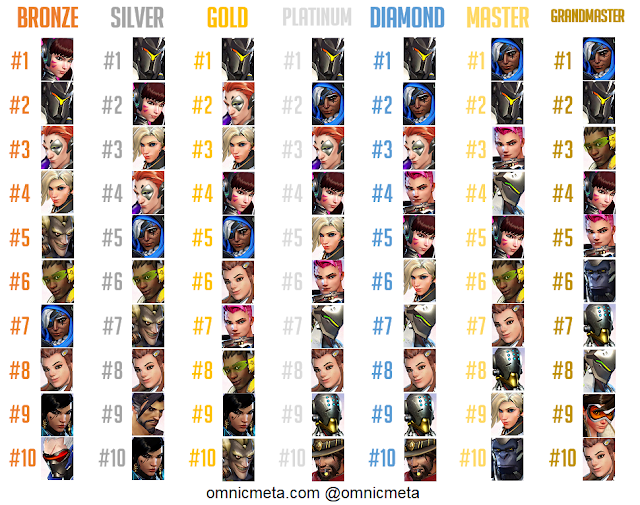 The figure above ranks the top 10 most popular hero mains in Season 12. Due to their popularity, these heroes are perceived to be the strongest in the game at each respective tier and can generally fit into most competitive ladder team compositions.  In other words, these "main" heroes are generally meta heroes.

The top heroes to main varies depending on the tier.  At the middle to highest tiers, Ana and Reinhardt are the top by a large margin, while D.Va and Reinhardt make the up the bottom tiers.  Reinhardt in particular is such an important part of the meta currently, given his 2000HP shield, Earthshatter, one-shot potential through the Charge ability, and the relatively high damage of hammer swings (especially as a Nanoboost target).

Aside from those two heroes, there are major differences between high and low tiers of play.  Ana grains in popularity as the tier increases, while Mercy drops, likely showing preference of requiring high skill to get the most out of the hero.  Similar to Mercy, Moira is exceptionally popular to main in tiers Bronze-Diamond, then is not even in the top ten of Master/Grandmaster tiers.  Finally, we find that Junkrat is really popular at Bronze/Silver, while Lucio, Genji, and Winston are very popular at the highest tiers. 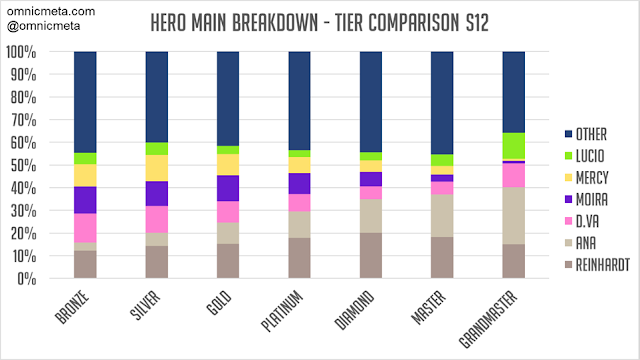 The above chart shows the relative popularity of a collection of hero mains.  The heroes selected have at least 9% popularity (out of maximum 100%) as a main in at least one tier.  There are a total of 6 heroes that meet this criteria in Season 12 - Reinhardt, Ana, D.Va, Moira, Mercy, and Lucio.   So of the popular six heroes - four are supports, and two are tanks.  With Support play in particular being fairly "diverse", it turns out that support players aren't flexing between heroes at all and are generally picking one to play consistently.  From the chart, notice the dominance of Reinhardt and Ana - particularly at the highest tiers.  Those two heroes make up 40% of all hero mains in Grandmaster in Season 12. Ana especially is over 25% of all hero mains at the Grandmaster tier - and is truly a meta pick. 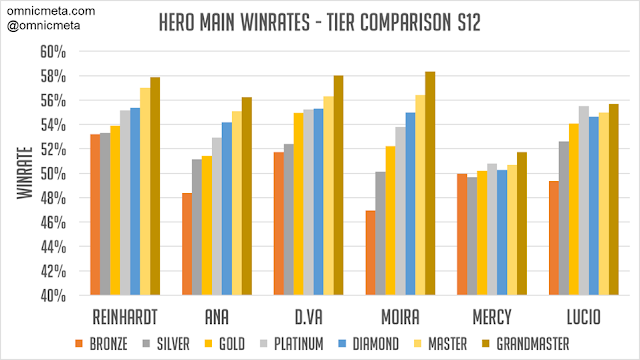 The above chart presents the average winrate for the same heroes as found in the previous chart. We know that specializing in meta heroes generally yields high winrates, and these heroes are generally no exception.  Some of the winrates for these popular heroes are quite absurdly high.  For example, notice the 55% average winrates for Reinhardt and D.Va mains, and 54% for Lucio.  The winrates on those three heroes are consistently high, which makes sense given their utility and strong place in the meta.  Ana and Moira's winrates are much more dependent on tier, though still high.  Some players may be surprised to see Moira's winrates, but she is a key part of the GOATs comp and when played the the maximum has the highest healing potential in all of Overwatch by far (especially since the Mercy nerf).  Finally, Mercy mains have struggled, and barely have above 50% winrates.  For higher tiers, this is simply unacceptable and may mean that players in those tiers are losing SR when they play her.  It's not clear whether Mercy is that bad of a hero or if the players haven't adapted to her new playstyle.  Either way from the data it is my recommendation that she only be played as a niche pick (e.g. pocket a Pharah).

More and more players are specializing in a hero - growing from 25% in Season 4 to 55% in Season 12.  While from my current meta reports we can see relative usage balance across heroes, players appear to not be filling and are actually sticking with their best (or favorite) hero instead.  Support and Tank players mostly fall into that category, as Damage players have a much bigger hero pool to fill.  Are you specializing in a hero this season?  If not, you may want to consider prioritizing your best hero.  After all, "everyone else is doing it".