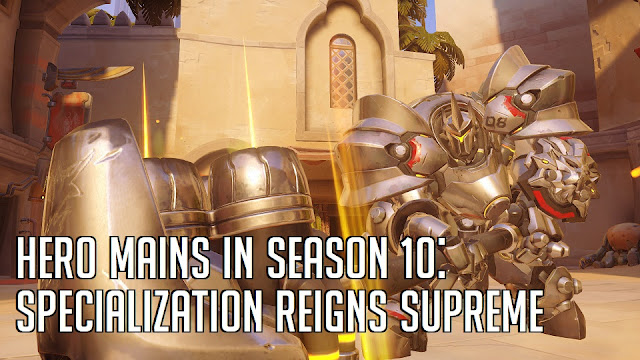 The biggest decision that Overwatch competitive ladder players have to make is which hero to play. Knowing the meta game and which heroes fit well is the big determining factor when it comes to deciding which hero to play. In this article, we analyze the popularity of hero mains. A player has a "main" hero when that player plays more than 50% of all games with that hero. Using the data for hero usage collected in Season 10 for PC, we break down the most popular hero mains for each tier.  As always, enjoy!

OmnicMeta analysis articles are supported by our generous patrons on Patreon. A special thanks to Diamond-level sponsors: Top Score Solutions and Ben Wilson. Patrons get rewards such as getting access to articles earlier.  You can find out more here.

There has been a significant amount of community discussion around hero diversity in Overwatch Season 10.  Quite a few players have pointed out that a small pool of "meta" heroes are dominating most of the playtime, with some players claiming this is the worst it has ever been.  A useful way to analyze and explore this phenomenon is looking at the prevalence of "one-tricks" and "mains".  I define a "one-trick" as a player that plays a single hero more that 80% of the time, while a player has a "main" if they play a hero more than 50% of the time.  Let's look at the data. 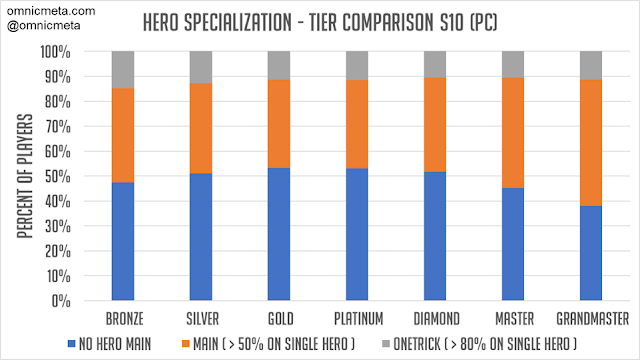 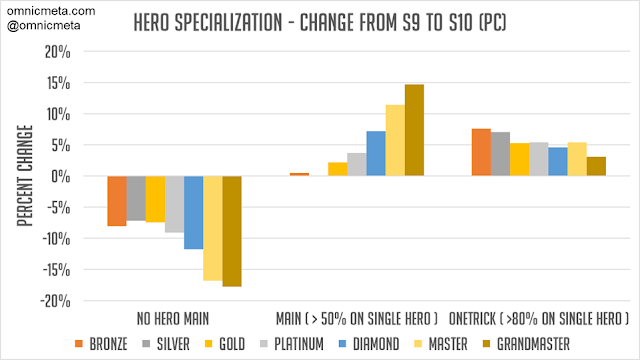 If the number of "mains" and "one-tricks" in the game doesn't surprise you, it should.  The number of players specializing in a single hero has remained roughly constant across seasons, at least since I started analyzing data in Season 3.  The chart above shows the change from Season 9 to Season 10 in terms of hero specialization.  Specialization has gone up more than +10% on average, with a +17% and +18% change in Master and Grandmaster respectively.  "One-tricking" appears to have roughly doubled over Season 9 across the tiers, increasing by +5% on average.  The majority of the change at the higher tiers is an increase in "mains" while lower tiers the biggest contributor is "one-tricks".  This shift is the biggest I've seen since I started collecting data in Season 3 - and clearly points to the idea that there is much less hero diversity in Season 10.  Players are more likely to queue up for competitive with a particular hero in mind than ever before. 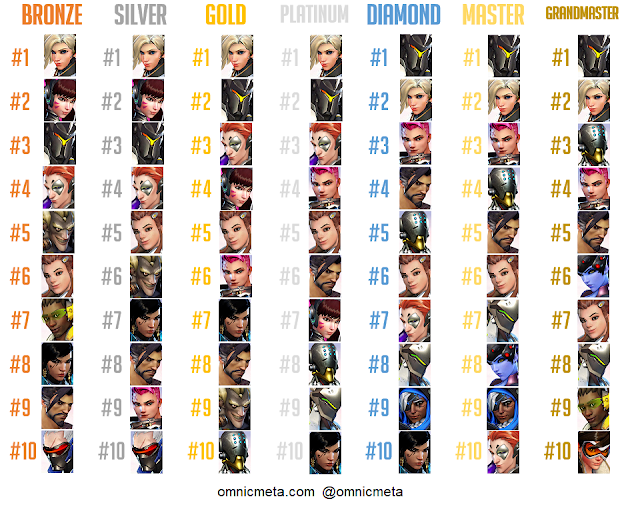 The figure above ranks the top 10 most popular hero mains in Season 10. Due to their popularity, these heroes are perceived to be the strongest in the game at each respective tier and can generally fit into most competitive ladder team compositions.  In other words, these "main" heroes are generally meta heroes.

Though each tier is different, there are two common heroes that are in the top 3 at every tier - Mercy and Reinhardt.

Mercy continues to be the go-to main healer in every situation - something that has not changed for about a year now.  Four factors enable her to fit into nearly every scenario: (1) high consistent healing, (2) great mobility, (3) Resurrect ability, (4) Damage Boost ability.  Resurrect remains a great counter to just about every scenario - losing teammates to dive/snipers/etc.  Being able to resurrect heroes with high value (Main tanks, Zen with Discord/Transcendence) arguably keeps your team in the fight better than every other regular ability in the game.  Damage boost has also proved incredibly valuable in Season 10. Not only can it be used to help allies charge highly-valuable ultimates, but it also has enables the burst damage heroes (Widow/Hanzo/Junkrat) to get the crucial picks to win the fight.  Of course, Damage-boosting a Hanzo Dragonstrike (with Zarya Graviton combo) allows damage to breakthrough even a Zen Transcendence for team wipes.  It's no surprise that she's as popular as ever; Mercy mains are 1 out of 14 competitive players in Overwatch.

Reinhardt has come strongly back into the meta, for the first time in many seasons, and has become a very popular hero to main or one-trick.  Rein offers two key abilities in today's meta: a strong barrier and brawling potential.  Today's compositions often have some combination of high burst damage heroes: Hanzo/Widow/Junkrat.  The 2000HP shield can feasibly protect most of the team, making it essentially required - even with a low uptime.  Reinhardt's Hammer swings and Charge offer both damage and displacement, making him a good brawler for low-mobility heroes in the game.  Displacement in general is strong in the meta right now, as isolating enemies away from their team is a key to winning team fights.  Reinhardt is most popular at Grandmaster, where 1 out of 8 players are maining him this season - he's everywhere.  Overall, 1 out of 15 players are Reinhardt mains in Season 10.

Aside from those two heroes, there are major differences between high and low tiers of play.  Zarya, Zenyatta, and Hanzo are three meta heroes found most often at the highest tiers.  Zarya pairs well with Reinhardt and Hanzo, with Dragonstrike+ Graviton arguably being the most powerful (and complained about) ultimate combo in the game.  Zenyatta is a pseudo-counter to the combo, while Discord remains a desired ability to help remove enemies from the fight. At the lower tiers, D.Va and Moira  are quite popular.  D.Va has always been the "do-it-all" utility tank, with high damage, mobility, and health.  Given that team compositions can vary quite a bit a lower tiers, she is a pick .  Moira has caught on due to her high burst healing output coupled with high mobility.  Both of these abilities can easily act as a "fix-up" to mistakes that either Moira or her team makes. 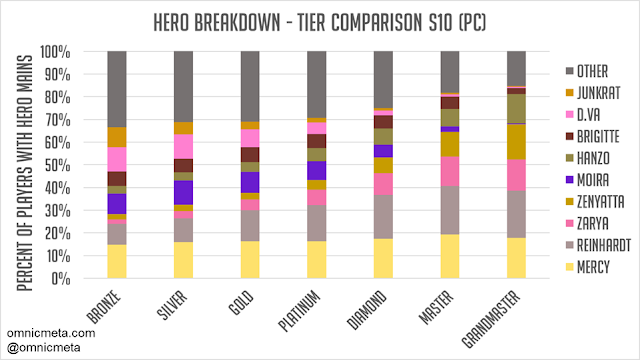 The above chart shows the relative popularity of a collection of hero mains.  The heroes selected have at least 8% popularity (out of maximum 100%) as a main in at least one tier.  There are a total of 9 heroes that meet this criteria in Season 10 - Mercy, Reinhardt, Zarya, Zenyatta, Moira, Hanzo, Brigitte, D.Va, and Junkrat.   From the chart, notice the dominance of a Mercy, Reinhardt, Zarya, and Zenyatta - particularly at the highest tiers.  Those four heroes make up 70% of all hero mains in Grandmaster in Season 10. While the contribution is less at the lower tiers, this high contribution further provides evidence that there may be a lack of hero diversity in the current meta (at least at the highest tiers). 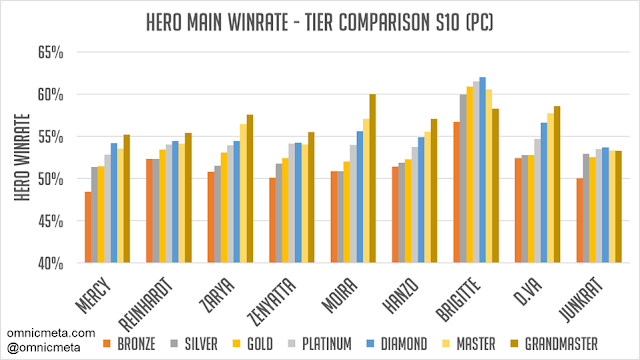 The above chart presents the average winrate for the same heroes as found in the previous chart. We know that specializing in meta heroes generally yields high winrates, and these heroes are no exception.  There are some really interesting observations that we can pull from the chart.  First, the average player winrate in Gold tier and below is typically below 50% - meaning that these players are trending downwards in SR.  Looking at the chart, there are a number of heroes that are well above 50% in those lower tiers - Reinhardt  (53%), Brigitte (59%) and D.Va (53%), to name a few.  Brigitte in particular has the highest winrates in the game at the lowest tiers - a clear testament that she is difficult to deal with.  At the highest tiers, Zarya, Moira, and D.Va pop out with winrates approaching 60%.  While Zarya is meta, D.Va and Moira's inclusion is quite interesting.  D.Va players at high levels know how to get value by pressuring snipers, hitting Self-Destructs into non-mobile opponents, and eating Zarya ultimates - all incredibly valuable in today's meta.  While I still think that Resurrect and Damage Boost is too good to pass up right now, Moira can offer great burst dealing to keep fights from snowballing quickly - also useful in this burst DPS meta.

The big takeaway that I have from analyzing the data is that Season 10 has been a meta with shrinking hero diversity.  There are a variety of reasons for this - Brigitte providing additional counter play to flankers, Hanzo's buff making him the star DPS hero, among others.  Either way, more players than ever before have started maining or one-tricking meta heroes and appear to have been generally rewarded with high winrates.  I will be keeping an eye on whether the trend towards specialization continues in the future.  With more hero changes (Symmetra et al) and hero 28 coming sometime soon, we'll see how Season 11 shapes up.