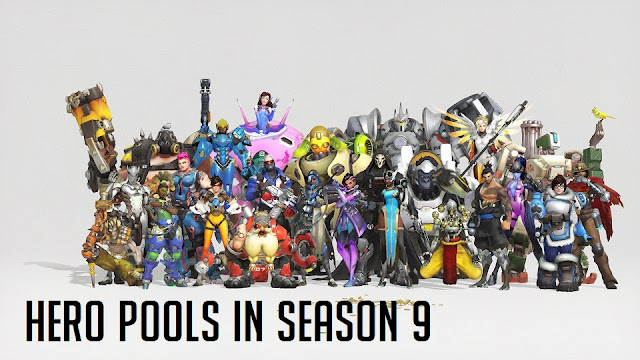 How deep are player's hero pools in Overwatch?  How many heroes does the average Overwatch player play in competitive mode?  There is lots of advice online for what kinds of heroes to play, such as the advice, "Choose one from each category" or "Stick to one category and do it well".  In this article we dive into the data and look at hero pool sizes and which heroes are most commonly found in hero pools. 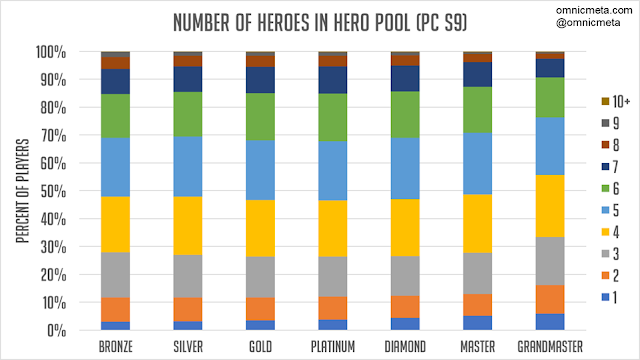 Looking at the chart above, we can see the breakdown.  Across all tiers, the average number of heroes in a player's hero pool is 4.5 heroes.  So while there are true one-tricks and somewhat inflexible players (1-3 heroes), on average players feel confident enough to play several heroes.  On the other hand, very few players play seven or more heroes regularly in comp.  Players that are "true flex" players simply aren't common in Overwatch, as specializing in a category or small set of heroes seems significantly more common. 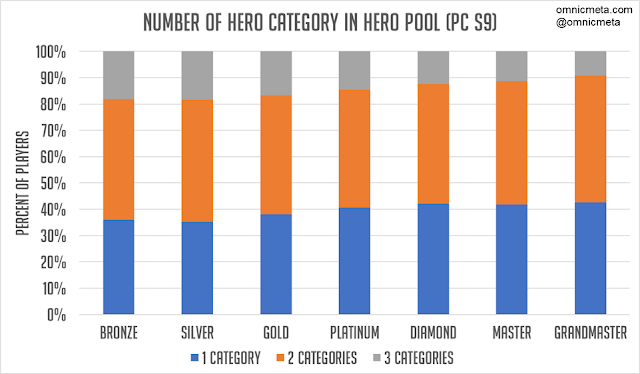 There are three categories in Overwatch: DPS, Tanks, and Supports (I lump Defense and offense heroes together into a "DPS category").  The chart above shows a breakdown across the tiers on how many categories each player has in their hero pool.  Immediately apparent from the chart is that players that play across all three categories are very rare. Surprising to me is that 35% to 42% of all players only play one category.  The general advice online is to have at least one hero in each category, and it looks like that advice is being ignored by most of the competitive Overwatch community.  Diving deeper into the data, 45% to 50% of players span across two categories with the most common pairings split nearly equally between DPS/Tank and DPS/Support (very few Tank/Support players).  Among those players, off-tanks (like Roadhog/Zarya) and off-supports (like Zenyatta) are quite popular. 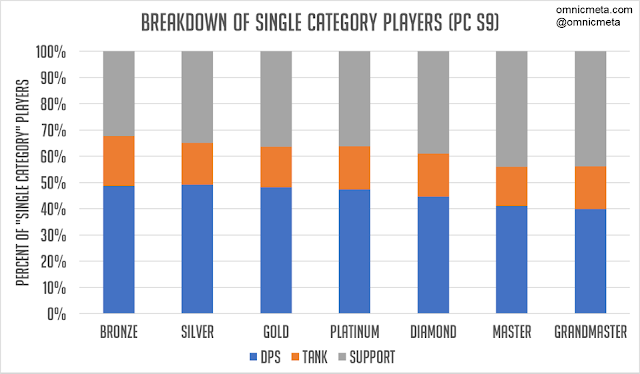 With roughly 40% of all players sticking to a single category, that makes them relatively inflexible compared with players that can cover two or more categories.  The chart above breaks down that 40% of players by those that solely play Offense, Defense, Tank, or Support heroes.  Interestingly, DPS players dominate the ranks amount single-category players, from 48% in Bronze to 40% in Grandmaster.  Quite simply, there are a lot of DPS-only players on ladder - which represents roughly 1 in 5 players in competitive mode right now.  For a game designed to be about switching heroes, you can expect these players to simply stick with heroes within their own category.  Support players feature most heavily at the higher tiers, varying from 32% in Bronze to 44% in Grandmaster.  The most interesting data when looking at the single-category players is that Tanks-only players barely feature at all with only 15%-20%.  In other words, it is relatively rare to find a Tank-only player: players that favor tanks will often choose to play heroes outside of their preferred category. 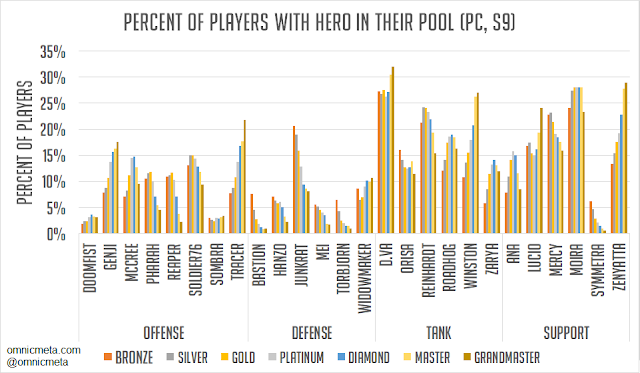 So which heroes are the most commonly found in player's hero pools?  The chart above shows the percent of players that have each hero in their pool.  Note that this data presented is not usage or playtime, but rather if the hero is in a player's pool.  Looking at the data, Tanks and Support heroes dominate in popularity.  There are several very common heroes that are above 25%, meaning that they are in the hero pool of 1 of 4 players.  Interestingly, that list of heroes features Tanks (D.Va, Rein, Winston) and Supports (Moira, Zen) as no DPS heroes make the 25% cutoff.  In seasons past we likely could have expected all-around hero Soldier to make the cutoff, but instead the DPS hero pool seems as diverse as it can be. This DPS hero diversity may simply be due to the fact that there are many more options to choose from as compared to Tank and Support.


The State of Hero Pools in Overwatch

With so much talk online about "one-tricks", it's certainly a welcome realization that many players have flexible heroes pools.  On the other hand, seeing so many players focus on a single category may surprise quite a few readers.  There certainly is a balance between flexing across heroes/categories and specializing, and I'll be sure to keep an eye on which way the trend goes.