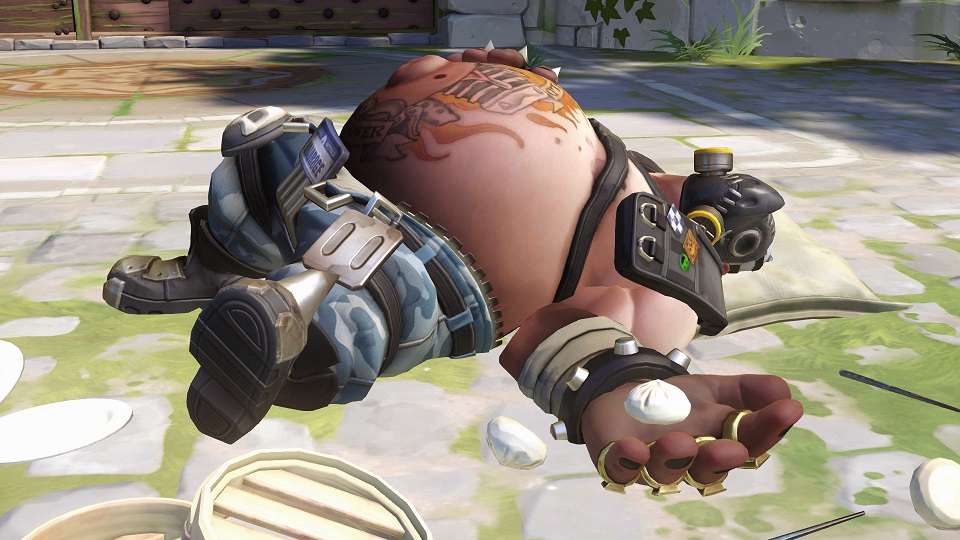 Patch 1.12 has been live for more than a week now, and the impact has already been felt across the meta.  Big changes to Reaper have seen him become viable for the first time in many months, while huge changes to Roadhog have caused him to completely fall out of the meta.  McCree's minor change to his ultimate ability have helped him be more viable in the current meta.  In this article we dive a bit deeper and see how the patch changes have affected the in game impact of Reaper, Roadhog, and McCree.

Patch 1.12.0.2 brought some of the biggest hero changes we've seen recently.  Roadhog, Reaper, and McCree all got some changes (of varying ).  To summarize: Roadhog has bullet damage reduced by 33% while getting a 30% increased fire rate and an increased clip size, Reaper got a new self healing passive that heals 20% of hero damage done, and McCree received a faster lockon for his deadeye ultimate ability.

The biggest effect of the changes have been on Reaper's survivability and Roadhog's ability to contribute to kills.  To demonstrate that, we present the eliminations per death for the three heroes before and after the patch. 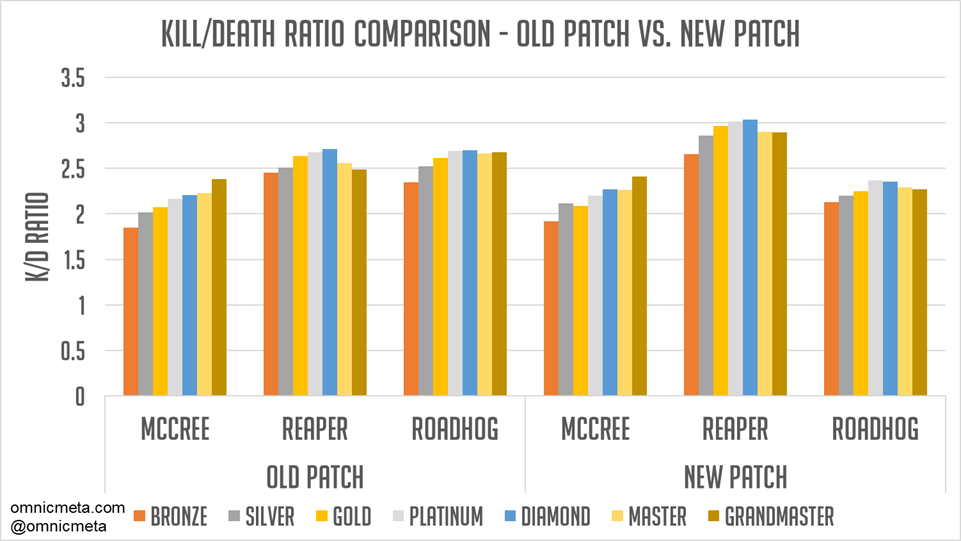 The figure above compare the average KD ratio across the competitive tiers.  Before the patch, Reaper and Roadhog were roughly equal to each other.  After the patch and the changes to Roadhog's weapon and Reaper's self healing, Reaper's eliminations per death has gone up 13% while Roadhog's has gone down 13%.  The reasons for this impact is fairly self explanatory, and have to do with the increases to Reaper's survivability and Roadhogs in

Note that McCree's KD ratio remains roughly the same as the prior patch.  Despite the major changes to his ulimate ability, his eliminations and damage remain similar with the new patch.  In other words, the buff to his ultimate has had very little impact on McCree's in-game statistics. 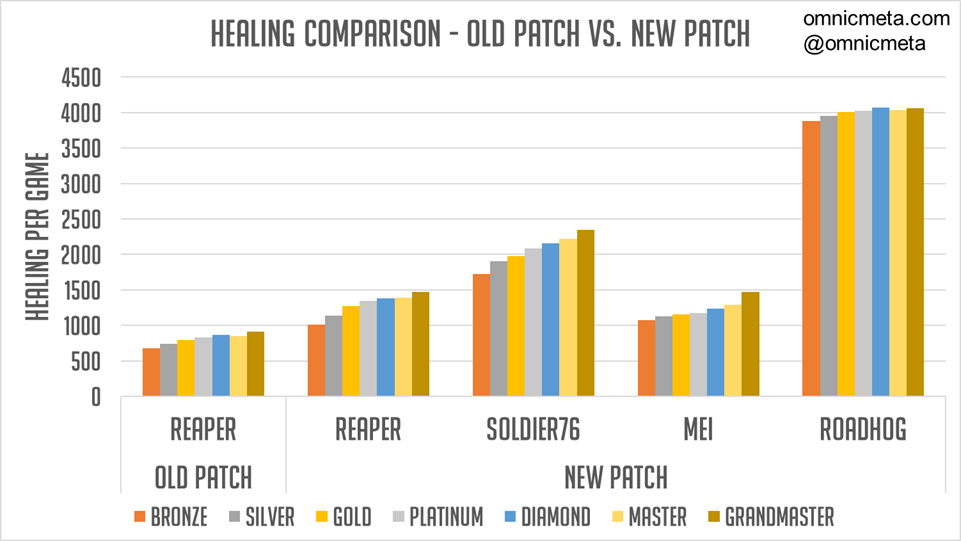 Taking a closer look at self healing, we compare Reaper to other heroes with similar abilities - Soldier, Mei, and Roadhog.  The big patch change for Reaper was the removal of health orbs on enemy player death, and instead the ability to heal 20% of damage done.  In other words, Reaper gained the ability to heal during fights, instead of after the fight was over.  As a result of the patch change, Reaper's self healing has effectively increased by 58% on average across the tiers (just look at the bump from 900 healing to 1475 healing at Grandmaster!).  This massive increase in healing is obviously very good news for Reaper's survivability.  When compared with other heroes, Reaper now heals more per competitive match than Mei, though still quite a bit less than Soldier and not even close to Roadhog.  However, note that Roadhog cannot deal damage while healing, while Reaper has the wraith form ability as an additional means of survivability.  All in all, the new patch is a big boost to Reaper. 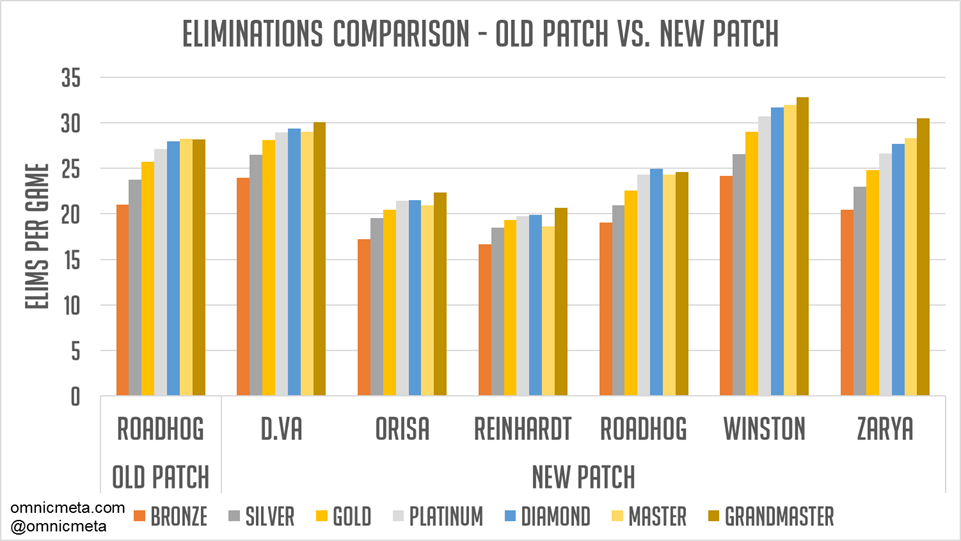 We look at eliminations per game as a way to judge the patch impacts on Roadhog.  Comparing old patch Roadhog to new patch Roadhog and all the other Tanks, we find some big changes.  Roadhog's key mechanic was the ability to hook and kill most heroes in Overwatch with a "one-shot" combo.  With that ability severely nerfed with the patch, times have certainly changed.  While Roadhog used to be in the running for the top Tank when it comes to eliminations per game, that is no longer the case.  Roadhog's eliminations have dropped by 12%, making his impact closer to anchor tanks Orisa and Reinhardt, two heroes whose gameplay largely revolve around shield play.  Whether this major drop in eliminations is due to a lack of teamwork to kill hooked enemies, or if it signifies a bigger problem remains to be seen.  As it stands now, Roadhog's game impact has been greatly affected in a negative way. 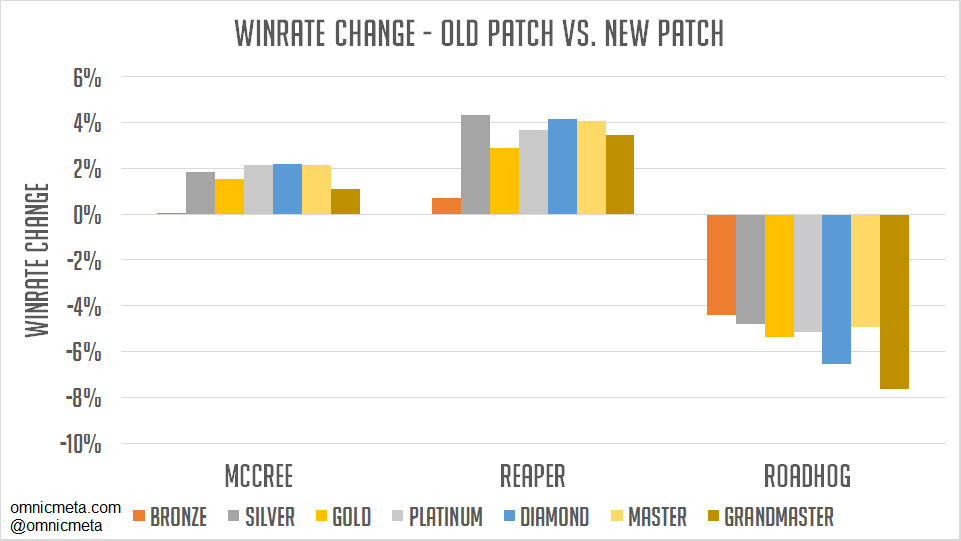 The above chart shows the change in winrates from the old patch to the current patch.  Positive values indicate that the heroes are winning more on the current patch, while negative values indicate the heroes are losing more often.  Based solely on the winrates, we can get a feel for whether the patch was a net positive or negative for each hero affected.  Of course, meta changes and preferences also can affect winrates.  From the data, we see that McCree's and Reaper's winrates have jumped, with McCree up 2% across most of the tiers and Reaper increasing around 4% across the tiers.  Reaper's winrates are now above 50% for nearly all the tiers, and around 5% for tiers Diamond through Grandmaster.  It seems pretty clear that the combination of the meta and these patch changes are enabling Reaper to be successful.  On the other side, Roadhog's winrate has completely sunk, and average of 5.5% and nearly 8% at Grandmaster.  This major decline puts him at an average winrate of 46% across the tiers.  In other words, while players used to win more games than lose when choosing Roadhog - now players are losing more games then they win.   At the same time, his usage rate has actually fallen to 15% at most tiers, and 10% at Grandmaster, where he used to be the most popular tank.

Roadhog is the absolute loser this patch.  He appears to have lost a significant part of his ability to get kills, and most importantly his winrates have tanked well below 50%.  Looking at tumbling usage rate for Roadhog isn't especially encouraging either.  On the flip side, we can certainly say that Reaper is back.  His solid winrate increases and his new found ability to stay alive (in addition to a favorable meta) appear to have made him more than playable, and possibly a future meta pick. Finally, the changes to McCree's deadeye ultimate seem to be tied to slightly higher winrates, but otherwise don't seem to have affect any other stat lines.