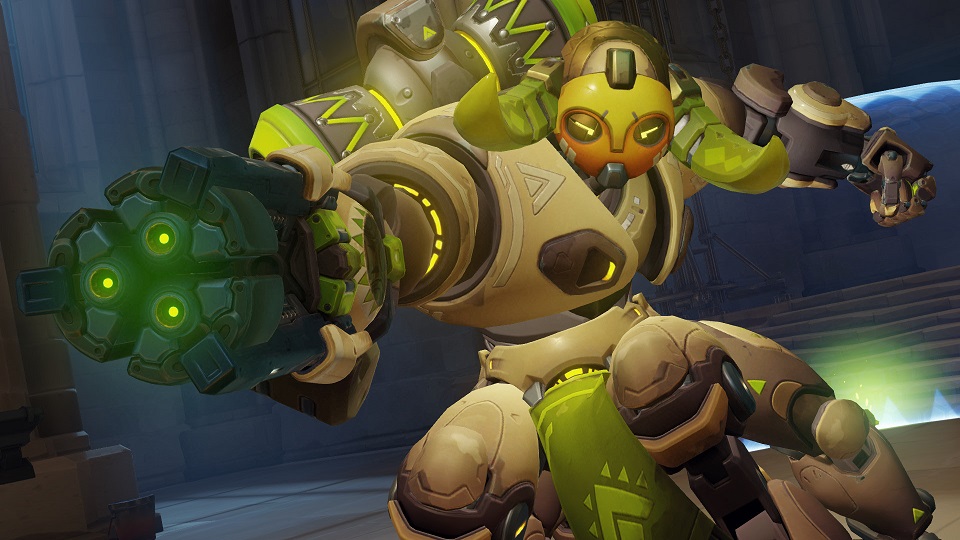 The new latest Overwatch patch has been available for a couple of weeks now.  How have the updated heroes fared amidst the changes?  To help answer that question we collect average performance stats per competitive match for each of the tiers (Bronze->Grandmaster) and compare the heroes of the new patch directly against their old counter parts.  For the four heroes we look at, this represents more than 200,000 matches of game data.  As the the data shows, Orisa seems to be the biggest winner by far and possibly even more viable on ladder.

Patch 1.11.1.2A brought a collection of hero changes.  The main changes we focus on are the major changes to Orisa, Reinhardt, Soldier:76, and Hanzo.  To summarize: Orisa gets a barrier cooldown change from 12 to 8 seconds and a 9% weapon damage nerf, Reinhardt gets height reduction on earthshatter also affecting height climbing ability of the ultimate, Hanzo gets a 10% increase in arrow charge speed, and Soldier gets a 5% primary weapon damage nerf.

Arguably the biggest patch change is the massive reduction in cooldown to Orisa's protective barrier.  The goal of the change was enable Orisa to better protect the front line of her team, while also enabling more frequent repositioning of the barrier. 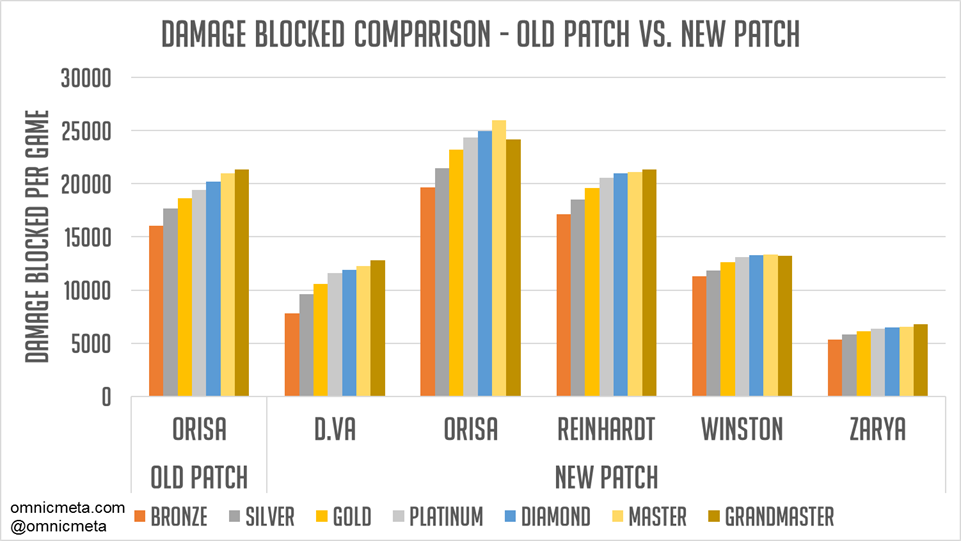 The figure above compare the damage blocked for Tanks.  Before the patch, Orisa blocked the same amount of damage as Reinhardt on average, and nearly double that of DVa and Winston.  After the patch, Orisa's effective damage blocking has been increased by 22% on average.  This massive boost in blocking ability has put Orisa far in front of Reinhardt.  Discussion online have questioned the effectiveness of Orisa's shield versus Reinhardt's, but with this huge buff it certainly seems like a niche is being carved out for Orisa.

The rest of the patch changes center around offensive abilities - weapon damage (Soldier, Orisa), damage per second (Hanzo) and ultimate ability (Reinhardt).  To evaluate the net impact, we look for changes in eliminations per competitive game. 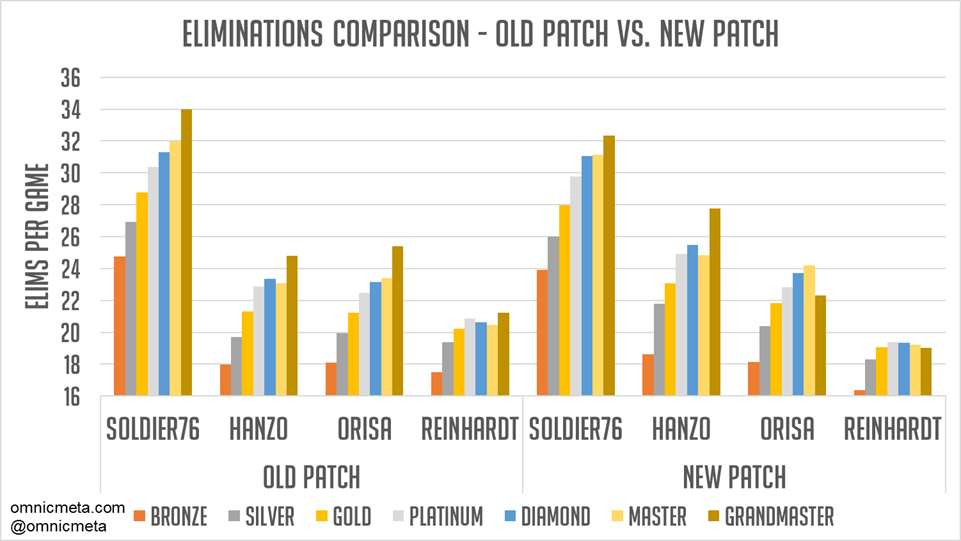 The figure above presents the old patch versus the current patch (Note that the Y-axis stats at sixteen - not zero). For eliminations, Hanzo's arrow charge speed change appears to be a big net buff.  His eliminations per game has gone up 9% on average since the last patch, and the closest offensive hero comparison in terms of elimination impact is McCree.  Putting aside the obvious projectile vs hitscan arguments, both heroes have a high weapon burst damage, and a similar number of eliminations and damage across the tiers.  Adding in the utility of sonic arrow, Hanzo appears to be in a good place right now.

Reinhardt experiences the largest drop in eliminations per game since the last patch across all heroes.  His eliminations are down an average of 7% across all the competitive tiers.  The reasons for this decrease are likely more complex and not only attributable to the nerf to his ultimate ability.  Other contributing factors to the drop include bugs being reported for hammer swing hits and dive team compositions being much more prominent this season.  Either way, it seems like Reinhardt is in a significantly worse place than last season.

The changes to weapon damage appear to have affected Soldier and Orisa much less. Orisa sees no net loss in eliminations on average, while soldier experiences a 3% drop in eliminations.  This is good news for both heroes, despite the knee jerk reactions evident in massive declines in Soldier's popularity on PC and Console. 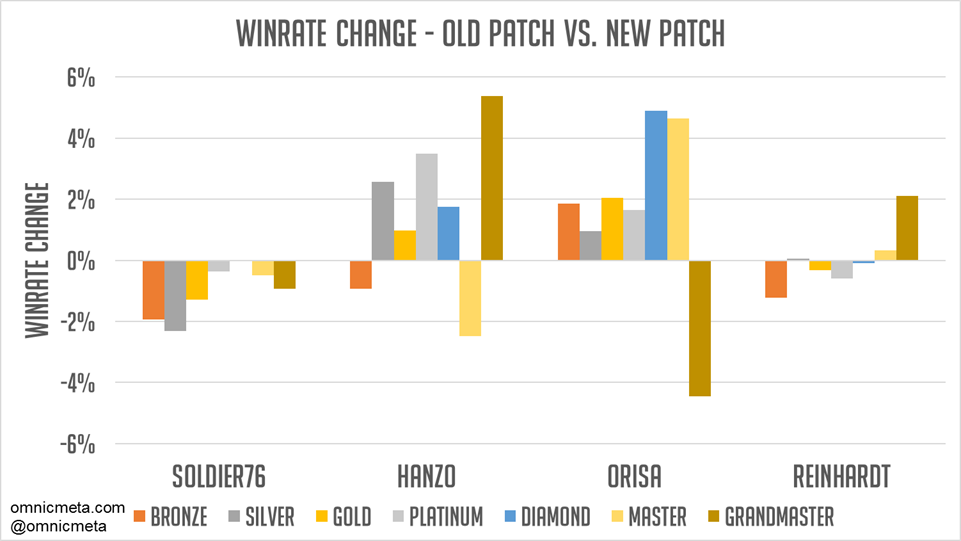 The above chart shows the change in winrates from the old patch to the current patch.  Positive values indicate that the heroes are winning more on the current patch, while negative values indicate the heroes are losing more often.  Based solely on the winrates, we can get a feel for whether the patch was a net positive or negative for each hero affected.  Of course, meta changes and preferences also can affect winrates.  From the data, we see that Hanzo and Orisa's winrates have generally jumped, in some cases 4% or more, depending on the tier.  While Hanzo has traditionally been a hero with a <50% winrate across the tiers, he now is approaching >50% territory for the first time.  For Orisa, she now has respectably high winrates, including 54% and 55% at Diamond and Master tiers, and above the average winrate for all tiers except Grandmaster.  Despite the reduction in eliminations and damage, Reinhardt's winrate remains roughly the same, reflecting the thought that the patch didn't harm him very much.  However, Soldier's winrate drops a bit at low tiers, where players are possibly less able to be as productive with him.

All in all the patch changes seem to have especially benefited Orisa. Her winrate are now significantly above average (and far above at Diamond and Masters), and her damage blocked per game is now the highest of all heroes in the game by a significant margin.  Is now the time to start playing Orisa? Possibly, but as always time will tell.  For the other heroes, Hanzo gets a nice boost, while Soldier is a clear nerf and Reinhardt's changes don't seem to have affected him very much.