Hammond Analysis and the Tank Meta 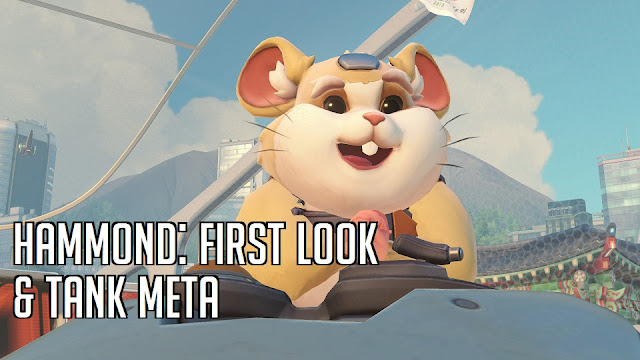 Hammond (Wrecking Ball) has hit the payload and is now active in competitive mode.  As it turns out, he's not a bad hero to play right now, though player's mileage will vary depending on mastery of his kit.   This article dives into how he compares to other tanks in terms of in-match performance.  As always, enjoy!

Hammond is the latest Tank hero in the game! He is literally a hamster in a ball (though the ball is a mechanized war machine), with high health, hitscan weapons, and good mobility.  Check out the patch notes if you want more details. In this article we use a week's worth of player data constituting more than 30,000 competitive matches for Hammond.

First, let me preface this analysis by saying that despite being on PTR more than a month ago, Blizzard does not have any hero-specific stats available for Hammond.  In other words, there are no stats for his abilities at all -> which means no analysis of Minefield, Piledriver etc (for now). 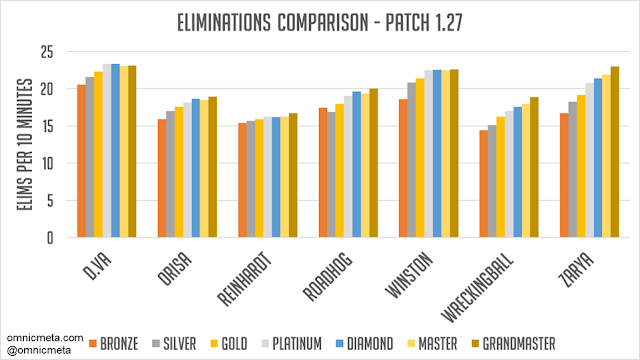 The above chart shows Hammond's (Wrecking Ball) eliminations per 10 minutes when compared to other tanks.  He ranks fairly low compared to other "dive" heroes like D.Va and Winston, which leads me to believe he is mainly a harrasser, and not much of a finisher.  Hammond ranks at the bottom of the meta tanks in the game (including Reinhardt, Zarya, D.Va).  The stats for final blows shares a similar picture, as he has the lowest final blows in the game next to Orisa. 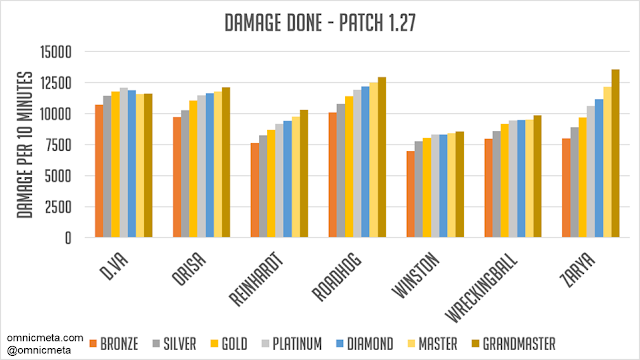 In terms of damage, Hammond's tells a similar story.  Comparing directly to similar hero D.Va, Hammond lags significantly.  He does put up favorable numbers compared to Winston, which may be acceptable for a harasser. 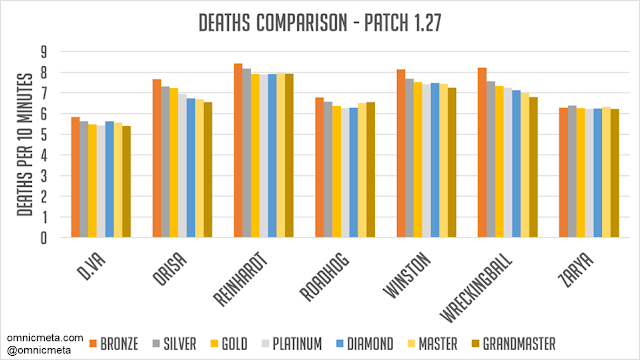 One of the biggest concerns of players is that Hammond may feed ultimate charge to the enemy team.  That may very well be true, but at least his survivability is in line with other tanks.  Hammond is dying less often than Reinhardt and Winston, which is certainly a good sign.  His mobility is generally good enough to escape the enemy when needed (given current player skill with him). However, once again he pales in comparison to D.Va. 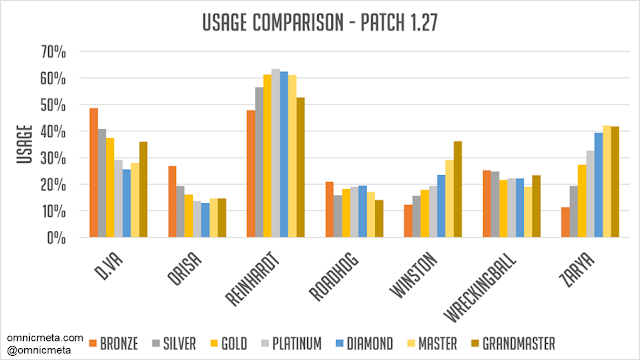 The above chart shows the hero usage for the current Tank heroes in Overwatch.  Hammond has made a pretty big slash, claiming 20% usage so far in play.  While other offtanks (Zarya, D.Va) remain popular, he currently out paces Orisa, Roadhog, and Winston at most tiers.  He certainly is being played at a good and healthy rate, which reflects his not-too-shabby stats.  Not that Reinhardt still dominates at the top tank in the current meta, with D.Va, Zarya and Winston being  popular depending on the tier. 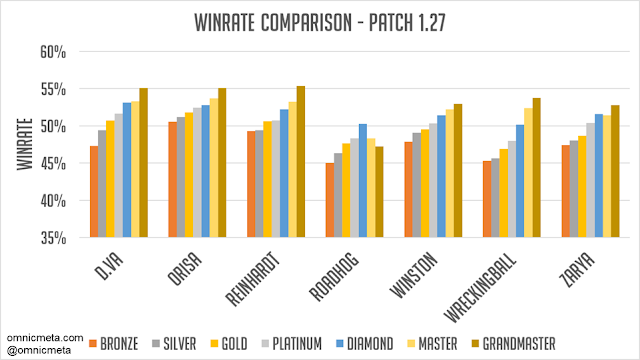 In terms of winrates, Hammond is pretty competitive with other tanks at the higher tiers, but ranks dead last at the mid to low tiers.  The winrates appear to relect his high skill cap, lack of shield, and "feeding" concerns some players have about Hammond.  It's entirely possible that Hammond is feeding enough ult charge to the enemy team in enough of these matches to affect his chance to win.  Nonetheless, his winrates may improve as players learn the hero more.


The Balliest Tank in the Game

So far Hammond seems like an interesting hero - mobile, impactful, with a high skill cap.  Though he currently doesn't blow any other Tank hero out of the water, he holds his own when it comes to statistics.  His high skill-floor shows with low winrates in lower tiers, but higher tier players do well with him.  The jury is still out whether he is good or bad, but I expect his fortunes to improve as players begin to master him.

Check Out These Other Articles
Patch 1.26: Mei and Sombra
Patch 1.25 Analysis: The New Symmetra