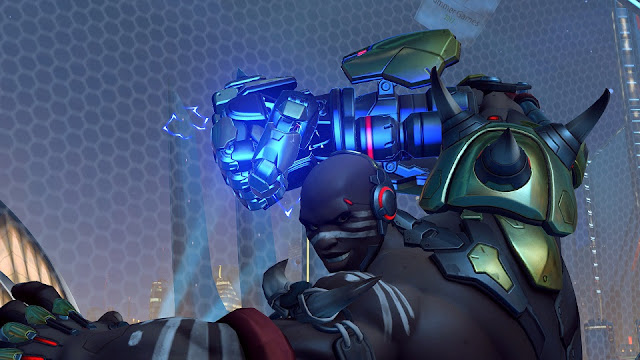 Patch 1.13 has been live for two weeks now, and Doomfist has been available for about a week.  While Doomfist's introduction is the biggest change by far, other heroes also were changed.  Bug fixes and a small DPS buff (hammer swing speed) to Reinhardt has helped regain his strength, while the changes to McCree (Flashbang) and Zarya (Graviton Surge) also have been a net positive.  In this article we dive a bit deeper and see how the patch changes have affected the in game impact of Doomfist, Reinhardt, Zarya, and McCree.

Patch 1.13 was a deceptively large patch in terms of hero impact.  Doomfist was introduced, while Reinhardt, Zarya, and McCree all got some changes.  To summarize: Reinhardt's hammer hit registration bugs have been fixed / he got a 10% hammer swing speed buff, Zarya's graviton surge ultimate ability no longer allows enemies to use abilities to escape, and McCree's flashbang greatly slows moving targets.

By all accounts, Doomfist is the most hyped new hero to date for Overwatch.  Since the first animated trailers came out showing off his gauntlet, players have wanted him in the game.  The developers have not disappointed at his released, giving him a unique set of strong melee abilities.  With Doomfist being available for the past week in competitive play the big question is: "Is Doomfist any good?"

To help answer that question, we look at average statistics and compare Doomfist against other offensive heroes.  Keep in mind that with Doomfist only being out one week, players are still learning how to play him in the most efficient way - and that these performance numbers will likely improve. 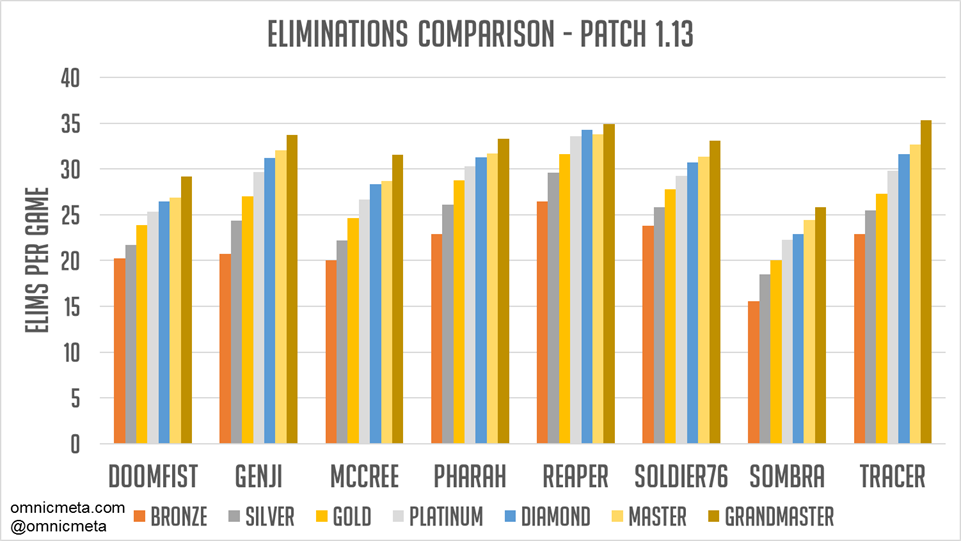 The main job of Offense heroes is the secure kills and rack up eliminations.  So, we look at how many eliminations per competitive match Doomfist players are getting on average.  Across the tiers, Doomfist is the second lowest of all Offensive heroes and only above Sombra.  However, there is some nuance.  Remember that Doomfist is a burst hero, one that uses high-damage and melee-range abilities to secure kills - generally speaking he does not do chip damage.  From a burst damage perspective, this makes him similar in some ways to McCree, who also has a similar amount of eliminations. 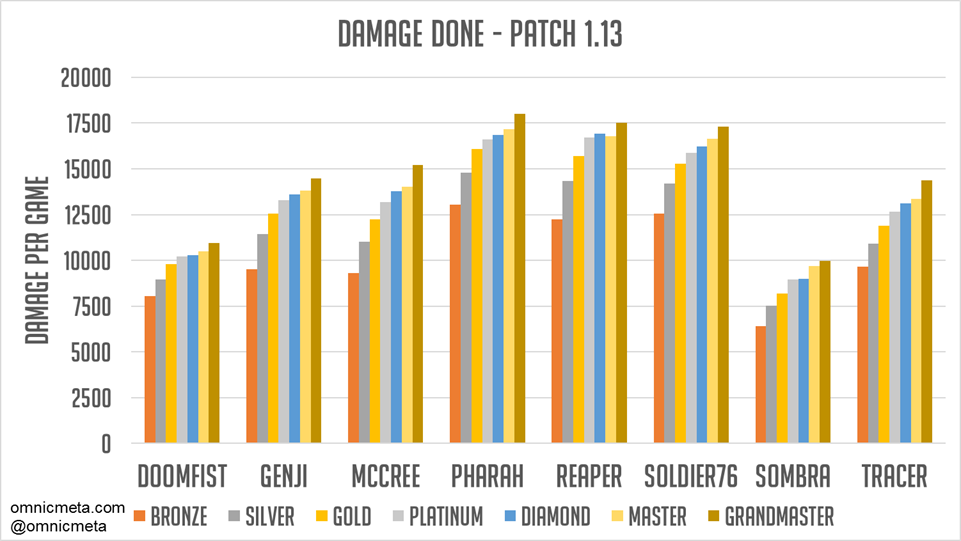 Looking at average damage done per competitive match tells a similar story.  Doomfist doesn't nearly half the damage as other offensive heroes, and once again is barely above Sombra.  However, this is not necessarily a downside of Doomfist.  Many competitively players are aware of the idea of "chip" damage: low amounts of damage that can be easily healed and doesn't lead to a kill.  Doomfist's melee-range attacks likely lead to a significant reduction in chip damage, and likely means that he won't feed enemy ultimate charge as much (as he does less chip damage).  Instead Doomfists combos melee range attacks and is more likely to kill when he lands his attack.  Put another way: (As it turns out) Doomfist is more efficient in converting damage done to kills than any other offensive hero in the game. 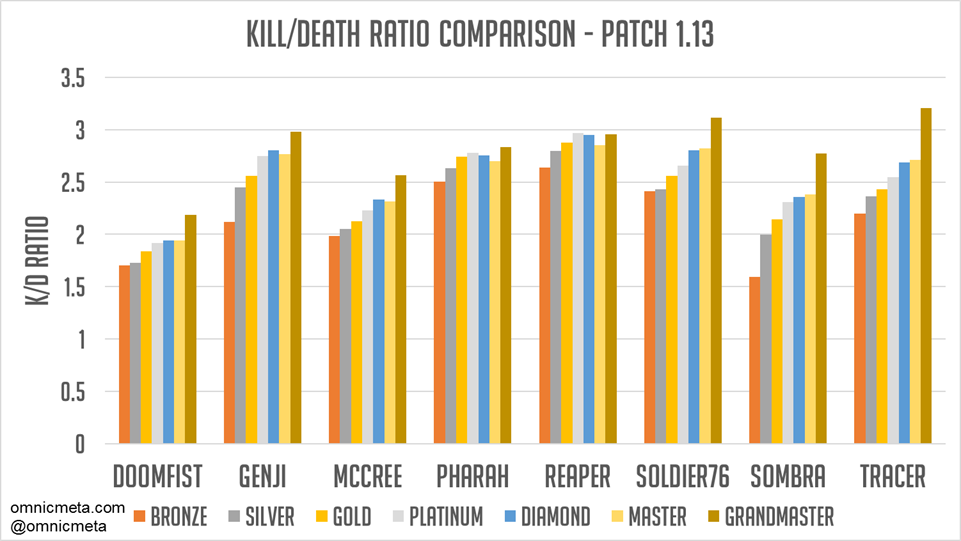 Which leads us to the next finding from pouring over Doomfist statistics - he is very much a "high-risk, high reward" hero.  When looking at kills per death, Doomfist lags behind every single offensive hero, including Sombra.  Only players in Grandmaster are averaging more than two kills per death.  In other words, Doomfist dies frequently.  It is very hard to stay alive as Doomfist, given his large hitbox and abilities which are used to engage into a group of enemies, putting himself in harm's way.  His most powerful attack, Rocket Punch, can one-shot-kill most heroes in the game - but only if it connects. 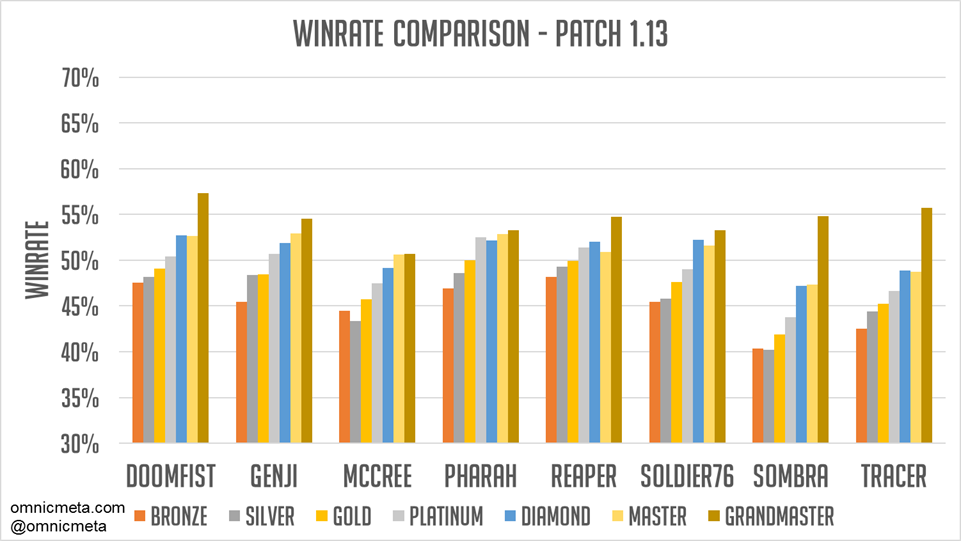 So are people having success with Doomfist?  The winrates certainly say yes.  Doomfist has some of the highest winrates in the game currently, rivaling meta pick Genji and beating meta picks Soldier and Tracer.  Note that Doomfist doesn't appear to have a high skill floor like Tracer or Sombra - he is able to win plenty more matches even at the lower tiers.  One thing to point out is Doomfist's usage of around 25% (across all tiers) in competitive matches.  While this makes him currently one of the most popular offensive heroes, the data doesn't show whether he is being played on all maps or in all situations.  In any case,  as time goes by, the winrates may change - but for now, he is one of the most successful offensive heroes in the game.


"So is Doomfist any good?"

The answer is pretty simple here - absolutely.  It seems clear that Doomfist's net impact on a match is very high - provided he can survive and secure enough kills.  His high burst damage (stemming from his Rocket Punch)  appears to be Doomfist's big asset.  While he requires great skill to be able to play well, Doomfist is a hero worth playing.  The biggest question right now is whether Doomfist is a hero that can be played on all maps and on both defense and offense.  If the answer to that question is yes, he appears to be one of the strongest offensive heroes currently in the game.

Though not as big of a change as the introduction of Doomfist, we also look at the changes to Reinhardt, Zarya, and McCree, focusing on eliminations and winrate changes at the metrics for impact. 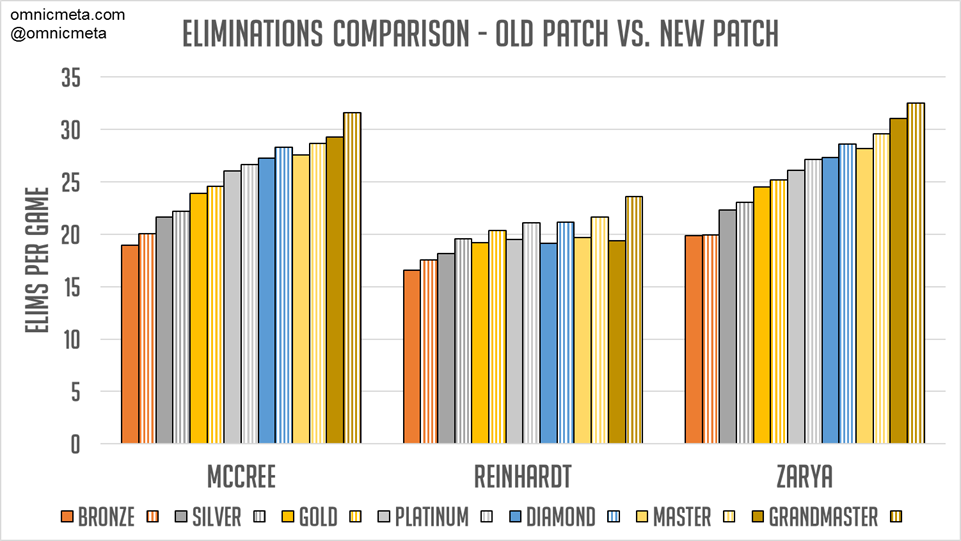 The above chart show the old patch (left/solid color) compared with the new patch (right/striped color) for each tier. By having the bars side-by-side, it is easier to see the changes between patches.

The changes to Reinhardt (hammer swing speed / hit registration), Zarya (Graviton Surge buff), and McCree (Flashbang buff) mostly affect their ability to secure kills, so we look at the impact on eliminations just before and immediately after the patch change.  Overall, the change has been a net benefit to the three heroes, with all three seeing more than a 5% increase in eliminations per match on average.  Reinhardt's bump is particularly good, as his eliminations per match have gone up more than 10% at the higher tiers. 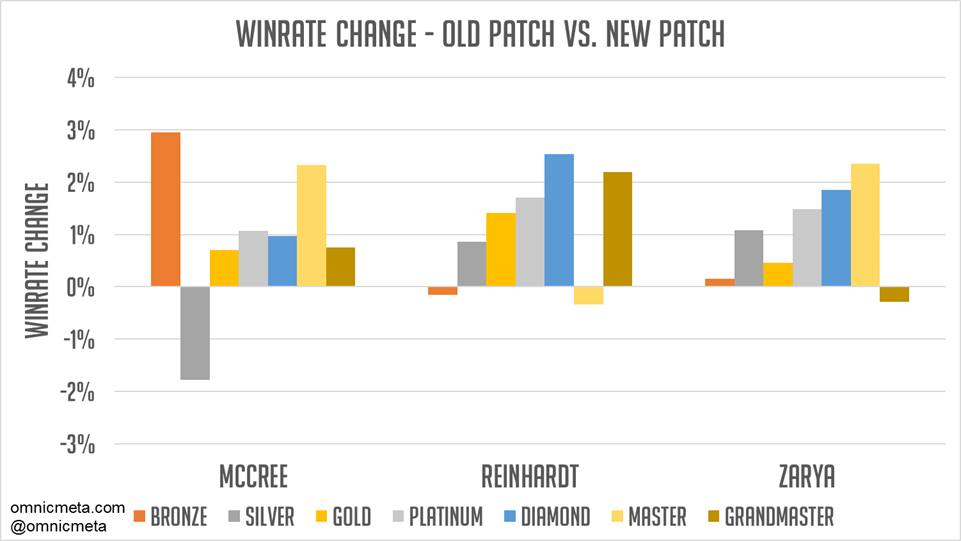 The above chart shows the change in winrates from the old patch to the current patch.  Positive values indicate that the heroes are winning more on the current patch, while negative values indicate the heroes are losing more often.  Based solely on the winrates, we can get a feel for whether the patch was a net positive or negative for each hero affected.  Of course, meta changes and preferences also can affect winrates. All in all, the changes appears to have improved all three of the hero's success rate.  For Reinhardt, winrates have gone up by nearly +2% on average, while Zarya and McCree's winrates are more mixed and around +1% on average.  While these improvements are relatively minor, the patch changes have enabled much more success for the three heroes.

The biggest winner is of course Doomfist.  If you are looking for a unique hero that has a huge potential for game impact - look no further.  While he has a significant learning curve, players across all tiers are having success with him right now.  Reinhardt appears to have been "fixed" with the recent patch, returning with even more strength than when he left the meta.  Zarya's and McCree's changes also are a big deal, especially as they are the two heroes seen to counter/pair with Doomfist.  Doomfist ultimate combos well with Graviton surge, and McCree's flashbang helps make short work of Doomfist.  To summarize, Patch 1.13 changes has already done wonders to fix a stale meta.  A big shoutout to the Blizzard Overwatch team for continuing their excellent work.