Did Mercy Mains Survive the Nerf? 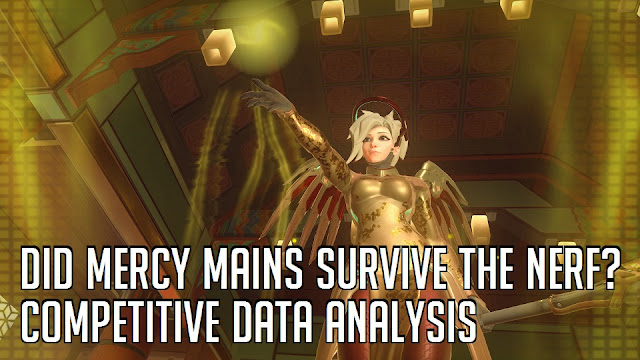 The recent Mercy nerfs were huge, removing much of the utility of her Valkyrie ultimate via changes to Resurrect.  Mercy has long been a popular topic in competitive Overwatch, with Mercy mains drawing the attention of much of the community.  The two sides continue to argue and battle about Mercy as a hero, and whether the players that main her have the skill to successfully play other heroes.  In this article, we dive into Mercy mains and analyze the data available.

We define a player to have a main if they play more than 50% of their games on a single hero.  In this article, we focus on players that spent most of their time on Mercy.  We isolate the Mercy mains in our 180,000+ player database for PC(US) and track them pre- and post-nerf for Patch 1.19.  We take 3 weeks of data before and after the Mercy nerf and see if the player behavior and success has changed. This article was inspired by the excellent analysis from Philadelphia Fusion's Beezy.

Analysis of Pre-Nerf Mercy Mains in the Current Meta 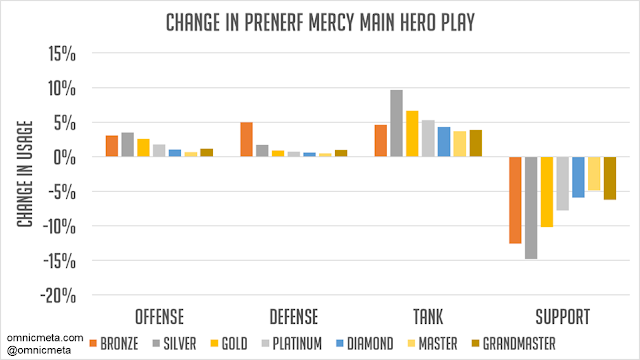 It comes as little surprise that Mercy is being played less after her nerfs.  But what heroes are Mercy mains playing?  The chart above shows usage change by categories for the per-nerf Mercy mains.  We might expect that instead of playing Mercy as much, the Mercy mains would switch to playing other supports.  It turns out that Mercy mains are not solely sticking with support heroes - and are flexing to DPS and Tanks heroes as well.  Tank play in general has increased the most, with lower tier Mercy mains (Bronze, Silver, Gold) increasingly choosing heroes in other categories to play. The heroes that are seeing more play from Mercy mains are Moira (+13% usage), Lucio (+5%), Ana (3%), Zenyatta (+3%), and D.Va (+2%).  Other tanks see a small bump across all tiers, while Soldier/Tracer/Reaper and Junkrat/Torbjorn/Mei round out the heroes in the DPS categories.  One final thing to point out is the big bump of Defense heroes being played at Bronze - we can always count on Bronze players to choose the heroes they find most fun. 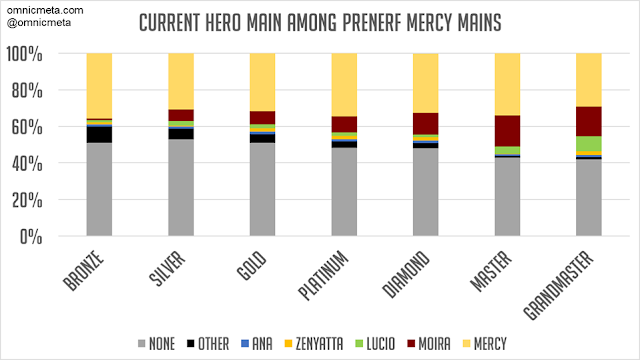 So have Mercy mains now simply maining other heroes?  The chart above shows the new heroes being mained by the (previously) Mercy mains.  It may come as a surprise which heroes the pre-nerf Mercy mainshave chosen to main - and that 33% of pre-nerf Mercy mains are still maining her a full 3 weeks after the big nerf.  As they say, habits are hard to break, and these players that are still maining Mercy may simply feel most comfortable on her.  An even larger percentage of Mercy mains are now playing more of a flex role, as 40% to 50% of players no longer have a main at all (no longer have a single hero with >50% of playtime).  Given the hero usage data, these Mercy mains still are spending 75% of their time playing Support heroes.  Main healer Moira is the most common new main across the tiers, followed by Lucio - with both heroes becoming increasingly more popular to main .  Moira may be a more natural fit for Mercy players, as she rewards good gamesense and positioning similar to Mercy.  As a final interesting nugget of data,  there are a number of Mercy mains that now main either Tank or DPS.  While these players are found more in the lower tiers, the trend may represent those players going back to their roots - before Mercy was considered a must pick. 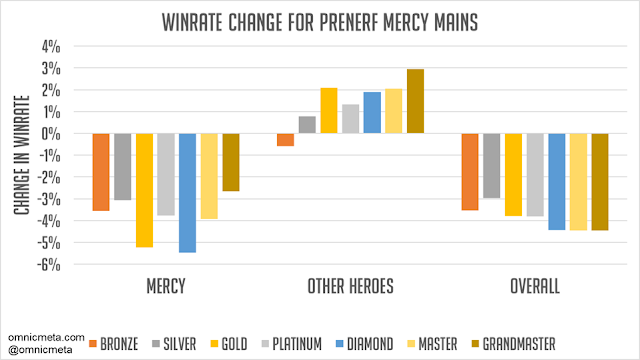 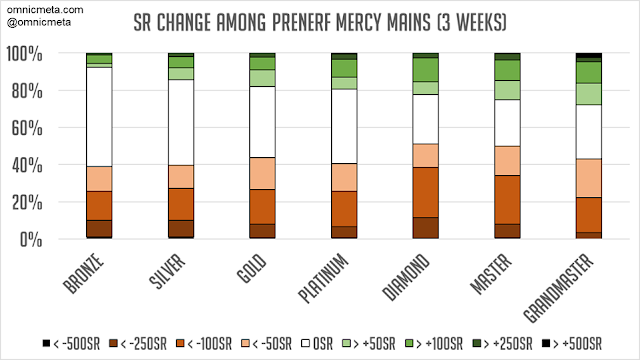 The chart above shows the change in skill rating (SR) among (previously) Mercy mains since the big nerf hit.  I grabbed their SR before the nerf and 3 weeks later and categorized the players into buckets to discretely show just how much impact the Mercy nerf had on players.  Just like winrates, the SR among Mercy mains has declined on average in Bronze (-66SR), Silver (-55SR), Gold (-49SR), Diamond (-62SR), Master (-48SR), and Grandmaster (-27SR).  Some players have been impacted greatly and declined a full tier (500SR), while others declined 250SR or 100SR.  On the other hand, some players have managed to survive the Mercy nerfs and gain SR - my data suggests those players are flexing to other impactful heroes (Moira, Lucio).

What's next for Mercy players?

By now, everyone know that Mercy has been crippled by the nerf to Valkyrie - though she remains a highly mobile main healer and useful in a number of situations.  However, the fears that Mercy nerfs would severely affect Mercy mains appears to be true - and the only known solution right now to prevent SR free fall is to learn other heroes.