One of the biggest challenges that the Overwatch team has is the delay in getting "hot patches" to console. There is a significantly long wait time for certification of patches before they can reach the players. This delay is a significant issue as when "overpowered" buffs come to heros, Blizzard can be really nimble with PC and get a fix out quickly, while the console folks have to wait a long time.
The effect of this time gap between PC and Console is very evident with the Bastion rework in S4. The "Ironclad" passive buff to 35% damage reduction in sentry and tank mode (in addition to combinations with Ana's ult damage reduction) was deemed way to strong. Blizzard consequently nerfed the damage reduction to 20% and capped max damage reduction possible from combining different hero abilities to 50%.

However, while PC has had this hot patch for several weeks now, Console has yet to get it. This creates a huge gap where a recognized "over buffed" hero still exists on Console, but not of PC. Take at the difference between Bastion's usage on Console vs PC: 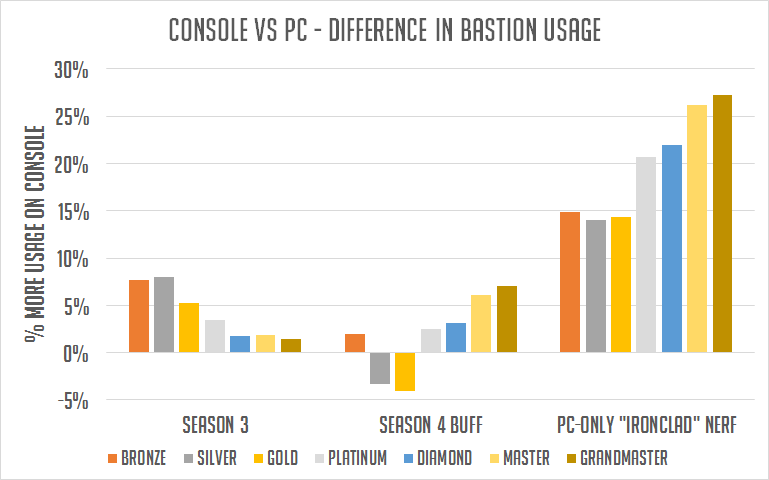 What the above chart shows is the difference in Bastion play between Console and PC (e.g. it shows Console_Usage - PC_Usage). Basically, we show the difference in Season 3 (before the buff), the start of Season 4 (the buff), and after the nerf to "Ironclad" which only affected PC. We see that in Season 3, Bastion only sees 2% to 8% more usage on Console than PC, with only 2% difference at higher tiers. After the buff and at the start of Season 4, the usage is similarly close between Console and PC. The big change comes with the nerf, as the gap is now 14% to 27%; Bastion continues to be used extremely heavily, while his usage continues to quickly drop on PC.

I think this data shows the woes that Consoles face when it comes to major changes to heroes. If there needs to be a rollback, Console has to wait weeks and weeks before any fixes can be made. This is a huge challenge for the entire Blizzard hero balancing team, and shows how important the PTR is.