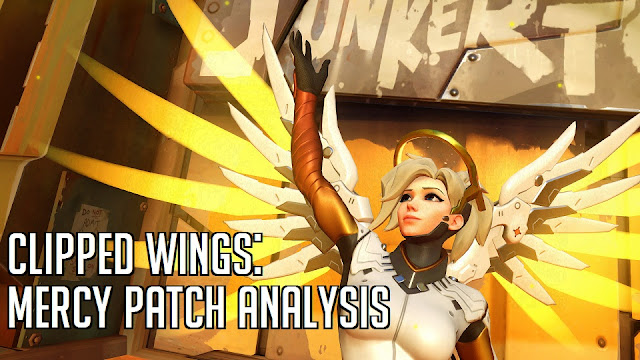 Mercy dominated the ladder for nearly many months, surviving a rework (read: OP buffs), two nerfs, and even surviving to make it into OWL in an arguably overpowered state.  Patch 1.19 hit one week ago, bringing some major nerfs to Mercy and Resurrect under the Valkyrie Ultimate.  In this article we dive into the data and look at how the patch changes have affected Mercy and her viability.

Patch 1.9 was long anticipated and expected to the the "fix" to the Mercy "problem".   We dive into how the patch changes have affected Mercy and her viability in Overwatch competitive.  First, as a recap, here are the changes that came with the patch:

First: a brief word on what hasn't changed: Mercy's healing and deaths per match.  Mercy remains the most mobile of all the supports, with the highest consistent healing output that can heal through barriers.  In other words, her bread and butter hero abilities haven't changed.  She still remains a great hero for pure healing - though her ultimate has been severely nerfed as the data later shows. 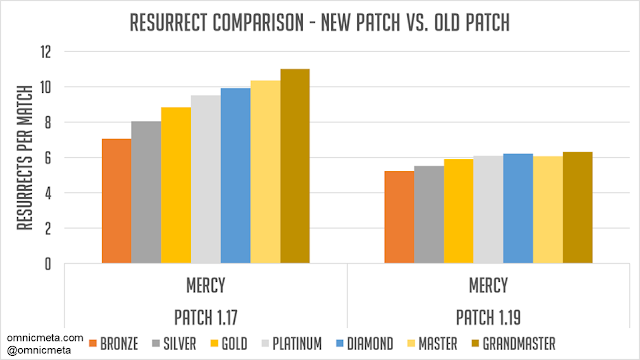 Resurrect is one of the most controversial ability in all of Overwatch. We studied the impact of Resurrect over patches, and found that the Mercy rework completely changed the impact of the ability.   Patch 1.19 nerfed Resurrect while using Valkyrie.  The figure above shows the impact of Resurrect per match - Resurrect has been nerfed to lows we've never seen before.  Recall that immediately after the rework, Resurrects per match used to be 15 at Grandmaster - now it is only 6. For those of you keeping score, that is nearly 1/3 of the previous number. Without the extra charge and near invincibility due to instant Resurrect and lightning fast Guardian Angel.  Even more striking is the lack of skill-based differences between tiers we're used to seeing.  It used to be that higher tiers would get more value out of Resurrect - that is no longer the case as nearly every tier gets a set 6 Resurrects per match.  For those players that wanted Resurrect out of the game - it appears as though you (almost completely) got your wish. 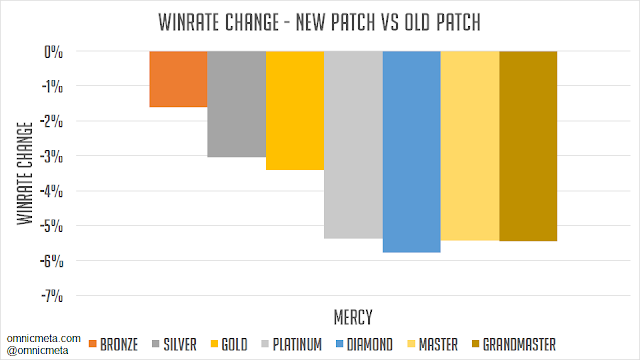 So since Resurrect has been severely nerfed, what has the impact been on Mercy's viability in the current meta?  Looking at winrate, we see that Mercy has tanked: her winrates are down -4% on Average.  As expected, the higher tiers have seen the worst decline, as lower tiers still generally use Mercy best as a healer. 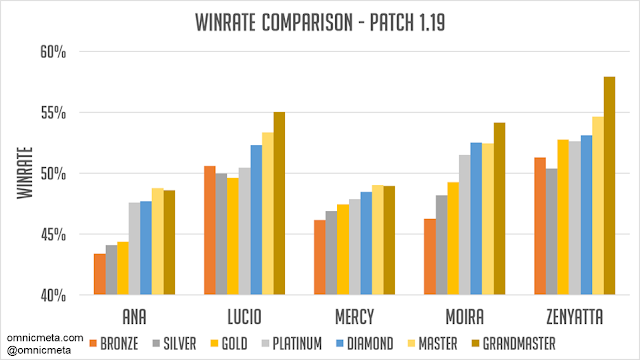 When looking at overall Winrate, the picture starts to look even worse.  Mercy used to have some of the highest winrates in all of Overwatch - reaching 54+% at Grandmaster.  Now, Mercy has the some of the lowest winrates - and second only to Ana among Supports.  We see that Lucio/Moira/Zen have much higher winrates by comparison.

Overall, the drop in winrate may be due to the fact that Mercy isn't as great as a sole main healer anymore, players haven't completely adapted to the changes, or that only stubborn Mercy players are choosing to run her even when they are losing.  Whatever the case, Mercy is no longer the standout support she once was.

Impact of the Mercy Nerf on the Support Meta 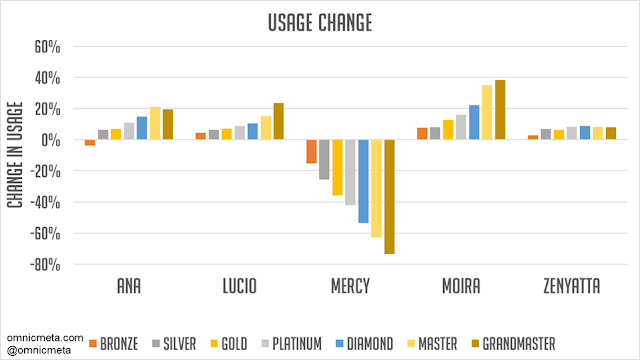 There has been a pretty big change in the support meta.  We have seen Mercy completely tank, especially at Grandmaster.  She is no longer a must pick, every other support has seen a rise in play.  The biggest boost has been to Moira, which may not be a big surprise to many players. 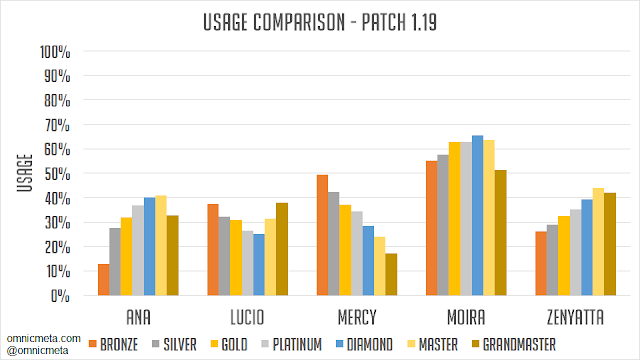 Looking at total usage, we see that Mercy is the least picked support in Master and Grandmaster now.  Moira is now the most popular healer across the board, average nearly 60% usage across all tiers of play.  Ana is also seeing substantial play - though this seems unwarranted given the shield tanks in the meta and her abysmal winrate.  The support meta otherwise looks quite balanced

Mercy, the What Can We Expect in the Next Nerf?

Mercy is not the support she once was.  With a severely nerfed Resurrect, her winrate and general viability has tanked.  It may very well be the case that her kit may be weak.  While it is too early to call for a buff, Mercy is without a doubt much less effective than she once was.