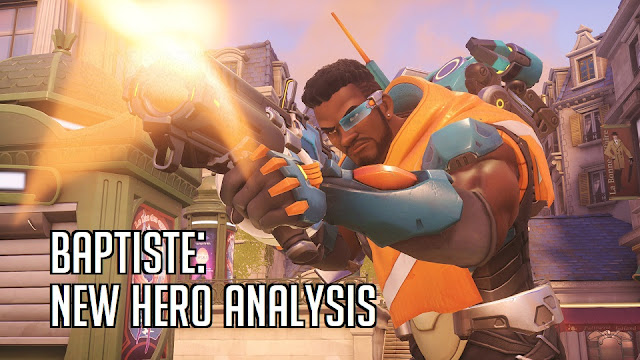 Baptiste has been live in competitive mode for two weeks now.  He finds an interesting place in Overwatch, providing high healing and medium damage and fitting in either as a main healer or off-healer.  Baptiste has been very popular on ladder so far, and the stats show that he is having a decent impact so far.  This article dives into the data analysis of Baptiste's impact in real competitive matches.  As always, enjoy!
--Switch

Love Overwatch League? We do too! Check out OWL player stats, detailed match results, hero meta and much more!

Baptiste is the newest support hero in Overwatch, coming in with quite a unique kit. He has a hitscan burst rifle similar to Soldier: 76 for damage and a grenade launcher similar to Junkrat for area-of-effect healing.  Rounding out Baptiste's abilities, he has Regenerative Burst for self- and team area-of-effect healing, Immortality Field for preventing teammate's deaths, and Amplification Matrix for doubling both healing and damage output. Finally, his Exo Boots enable super jumps to quickly reach high ground.  Check out the patch notes if you want more details.  In this article we dive into in-game statistics for Baptiste and other support heroes using real game data - two week's worth of player data constituting more than 90,000 PC competitive games played for Baptiste.

Comparing Baptiste to Other Support Heroes

The best way to dive into Baptiste's in-game impact is to compare him to other support heroes.  As a support, we look at healing, eliminations, damage, and deaths. 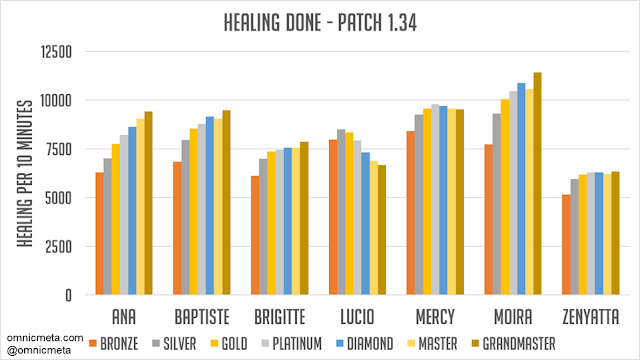 There have been quite a few debates about Baptiste's role.  Is he a main healer or an off healer?  The data above shows total healing done per 10 minutes of play time.  Baptiste's healing output in game slightly surpasses Ana and approaches Mercy at the highest tiers.  Perhaps more importantly, Baptiste's healing output greatly exceeds off-healers Brigitte, Lucio, and Zenyatta. Needless to say, Baptiste can certainly be a main healer and compete with nearly any other support hero - with the obvious caveat that multiple teammates need to be in the area-of-effect of both his healing abilities. 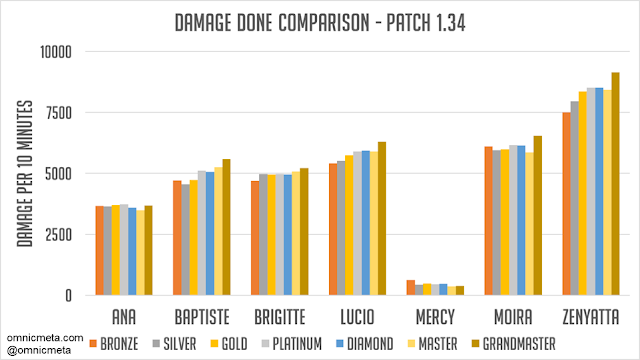 Moving into total damage done per 10 minutes on the current patch, Baptiste also looks very favorable, especially when placed against other main healers Ana and Mercy.  Baptiste averages roughly 5000 damage per 10 minutes, similar to Brigitte and about 15% less than Lucio and Moira.  However, each of those three heroes are not designed for long-range damage in the way that Baptiste's hitscan rifle is, enabling him to fill an additional role on the team. 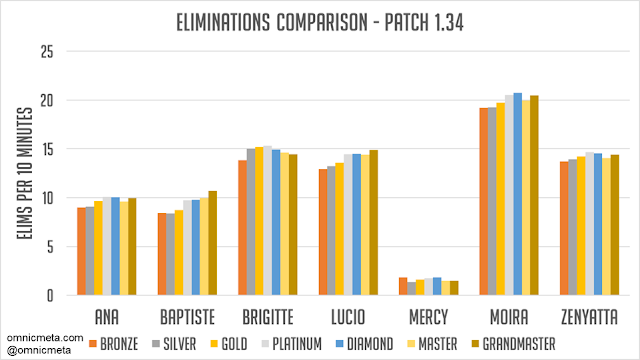 Though Baptiste's damage output is quite good for a support hero, it's not clear that players have maximized his kit yet.  Looking at eliminations per 10 minutes, Baptiste ranks near the bottom of support heroes and next to Ana.  In other words, the damage output is not commensurately leading to kills.  Considering that Baptiste has a unique ability to better position to high ground with Exo Boot jumps, you would think Baptiste would be much more adept at helping secure kills than Ana.  However, when we consider the tightly packed team compositions currently being played on ladder, other support heroes with close range damage greatly benefit (including Brigitte, Moira and projectile heroes Lucio and Zenyatta).  My interpretation of the data is that Baptiste players may also spend a significant amount of time generating poke damage (which may be reflected in hero winrates later in this article).

How Good are Baptiste's Abilities?

The Immortality Field is arguably the most unique part of Baptiste's kit, and one that can make for clutch plays that frustrate the enemy team.  The chart above shows teammate lives saved per 10 minutes using the Immortality Field.  Despite its strength and apparent strategic element, the data in the chart above indicates that effectiveness is the same across all tiers of play.  So though the field can be deployed in a pinch, Baptiste players at Bronze are getting similar utility out of it as players in Grandmaster.  Moving forward, I expect that players will learn how to focus down and destroy the Immortality Field even more quickly as they get used to Baptiste's presence in competitive mode. 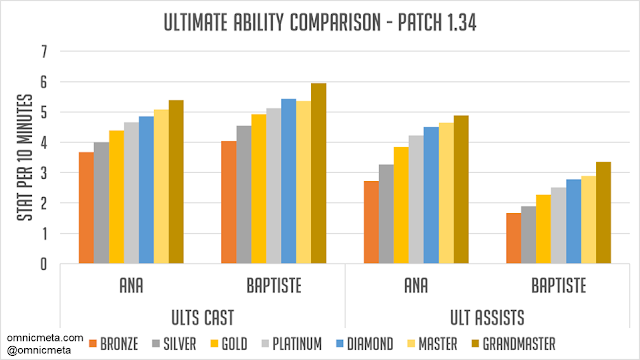 Looking at the data so far, there are a lot of similarities between Baptiste and Ana - and their ultimate abilities are no exception.  Amplification Matrix is an quick-charging offensive-oriented ultimate that boosts damage, similar to Ana's Nanoboost.  There are differences of course (Nanoboost heals and is single target, while Amplification Matrix is fixed position and can enable multiple teammates), but offensively enabling teammates is great commonality.
Comparing the in-game statistics of two ultimate abilities yields some interesting insights.  First, Baptiste gets his ultimate at roughly the same rate as Ana (slightly higher), with higher tier players earning the ultimate ability quicker than lower tier players.  Second, Baptiste's ultimate is not nearly as impactful.  Baptiste players get nearly half the assists from Amplification matrix as Ana players get from Nanoboost.  This is quite poor productivity, especially considering that Amplification matrix enables multiple teammates (vs Nanoboost's single target) and both healing and damage.  Many players in the community have mentioned how they feel that Baptiste's ultimate doesn't get much value, and the statistics certainly appear to back that up.  Nanoboosting certain heroes such as Genji's Dragonblade can get quite a bit of value, but right now there appears to be no obvious parallel with Amplification Matrix.

Let's take a look at Baptiste's reception and success on ladder by diving into the support meta: hero usage and winrates. 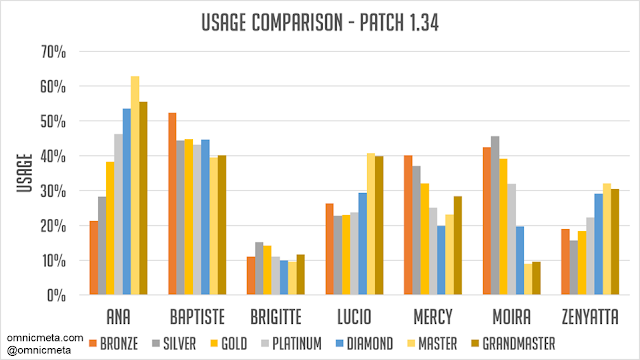 Baptiste has been quite popular since release, averaging more than 40% usage across all tiers of play.  That level of popularity is consistent with an effective support hero at launch, as both Brigitte and Moira were at similar levels at their release.  Interestingly, main healers Ana, Mercy, and Moira are adding up to around 100% at each level - which indicates that despite his high level of in-game healing, Baptiste is generally being played as a off-support.  His offensive ultimate ability and ability to output decent damage is also consistent with that playstyle.  There may be situations where Baptiste can be played as main healer in tight-knit brawl team compositions (similar to Moira), but that does not appear to be common on ladder today.
The rest of the support hero meta is Ana popular at higher tiers, Moira popular at lower tiers, and Mercy being played some as well (most likely by Mercy mains or to specifically pair with DPS heroes e.g. Widowmaker/Pharah).  Lucio and Zenyatta still remain popular, while Brigitte has fallen to niche status as a remnant of the 3/3 meta. 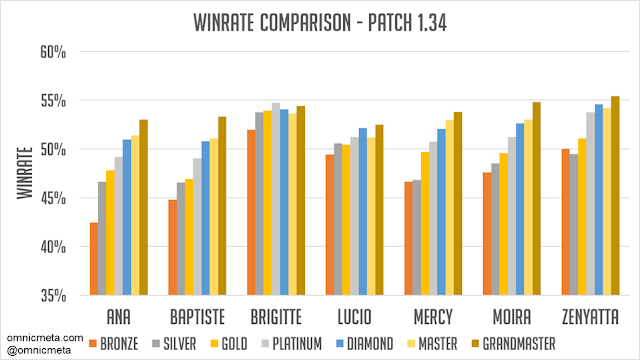 Looking at the data, Baptiste has some of the lowest winrates out of all supports - indicating that either players have not yet figured out his true playstyle or that the meta simply doesn't favor him at the moment.  As mentioned near the top of this article, Baptiste isn't currently effective at converting damage into kills, which may be related to his low winrates.  My take is that Baptiste players need to figure out how to maximize their effectiveness with damage output in general, including Amplification Matrix.  With only two weeks of playtime in competitive mode right now, it still is a bit early for low winrates to be a death sentence, though they will clearly deter some players.
The most popular heroes also have some of the highest winrates, including Moira and Zenyatta who offer good winrates especially at the lowest tiers.  Despite Ana's popularity, her winrates remain low except at the highest tiers, a testament to her high skill floor.  For more situational picks, the winrates for Brigitte (3/3 compositions) and Mercy (DPS pocketing) remain quite high.

Baptiste has started his Overwatch tenure with a bang.  He appears to be quite a flexible support hero, able to dish out great healing and damage, while providing utility in the form of his Immortality Field to save his team.  Amplification Matrix appears to be a big weakness in his kit, and Baptiste's winrate is not very good right now.  Despite his current popularity, it's unclear whether Baptiste will become a popular main or off healer, though he does have a place as a niche pick in tightly-packed team compositions.