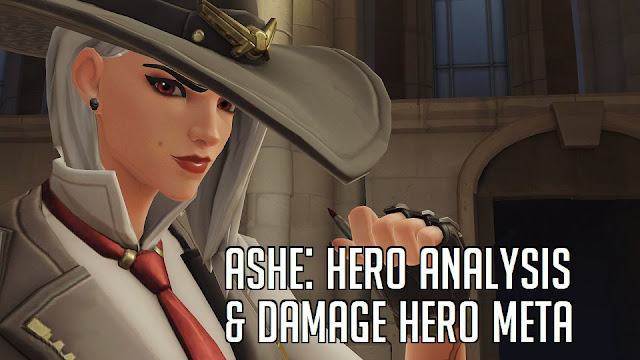 Overwatch's 29th hero Ashe has been live in competitive mode for one week now.  She's made a big splash so far, as apparently many in the game were waiting for another hitscan damage hero to try.  While her popularity is high right now, it doesn't hurt that her in game impact is high too.  This article dives into the data analysis of her impact in real competitive matches.  As always, enjoy!
--Switch

Did you know that you can look up your Player Stats on OmnicMeta? Click here to check it out!

Ashe is listed as a damage hero, and her main playstyle is that of a hitscan weapon similar to Soldier: 76, McCree, and Widowmaker.  Ashe's kit extends beyond her weapon to include Dynamite, a Coach Gun used for mobility (or finishing off low heroes), and her trusty omnic sidekick Bob as an ultimate.
Check out the patch notes if you want more details, or check out the stats on her abilities. In this article we dive into Ashe and other damage hero's statistics using real game data - a week's worth of player data constituting more than 50,000 PC competitive matches for Ashe.

Comparing Ashe to Other Damage Heroes

So just how does Ashe compare to other popular DPS heroes?  Today's most popular heroes are Doomfist, Genji, Hanzo, Junkrat, McCree, and Pharah (popular at various tiers).  We compare Ashe's in game impact against these heroes and Widowmaker, a hitscan sniper similar to Ashe. 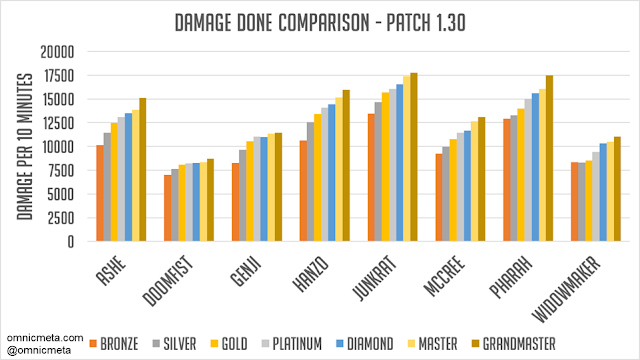 The above chart compares the total damage done per 10 minutes on the current patch. Interestingly, looking at the chart reveals that burst damage heroes (Ashe, Hanzo, Junkrat, Pharah) lead the way in raw damage output.  Ashe is roughly where we might expect - in between Hanzo and McCree.  She has great damage output - easily averaging 1250 damage per minute on average across the tiers.  This clearly differentiates her from other burst damage heroes like Widowmaker as well.  Overall, Ashe is having a great impact on the game from the damage perspective. 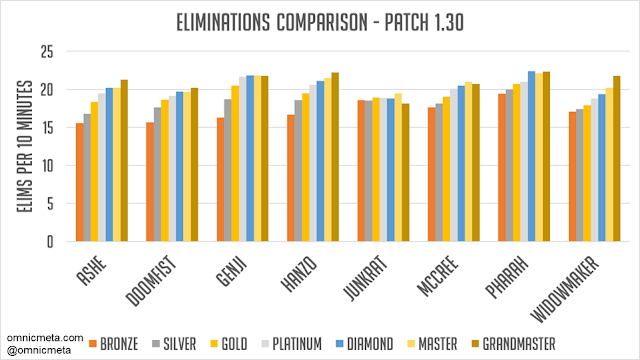 Looking at eliminations, most of the popular Damage heroes have similar contributions. Just like damage output, Ashe looks very competitive in getting eliminations.  She still lags a small bit behind McCree and Widowmaker at the lower tiers - the trends from Bronze to Grandmaster show that she has a high skill ceiling (at least with regard to eliminations). 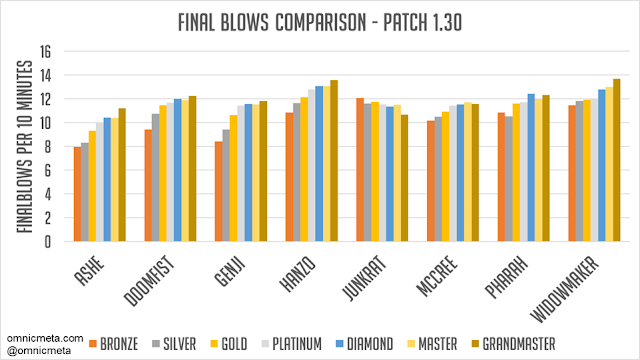 Despite excellent damage and elimination output, it turns out that Ashe lags behind other similar heroes in final blows. Considering that Ashe is a burst damage hero (scoped head shots damage up to  170HP) and has Dynamite to finish low health heroes, this is somewhat surprising.  Instead Hanzo, McCree, and Widowmaker all exceed Ashe in getting the finishing blow.  The McCree comparison is especially interesting as McCree has lower burst damage (140HP headshots), but faster firerate compared to Ashe's scoped shots. 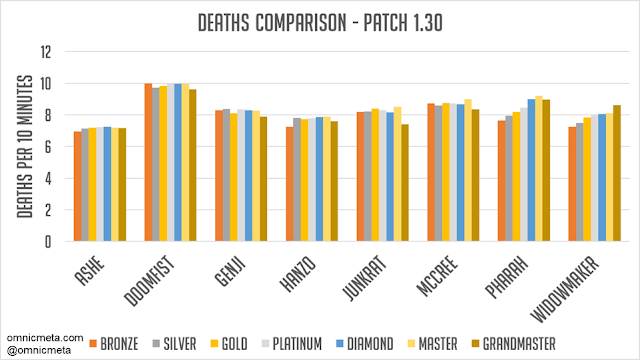 Rounding the comparison to other Damage heroes, we take a look at how often each hero dies in a competitive setting.  Interestingly, Ashe averages only 7 deaths per 10 minutes, while all other popular heroes are averaging 8 deaths per 10 minutes (not counting perennial feeder Doomfist at 10 deaths per 10 minutes).  One unique aspect of Ashe's kit is her high burst damage and high mobility on a low cooldown.  She can stay at distance, and when engaged at close range can quickly disengage vertically or horizontally with Coach Gun - up to 25 meters away (enemy 15m, Ashe 10m).  Other ranged heroes also have disengages (Hanzo and McCree), but most don't displace the enemy hero like Ashe's Coach Gun.

How Good are Ashe's Abilities? 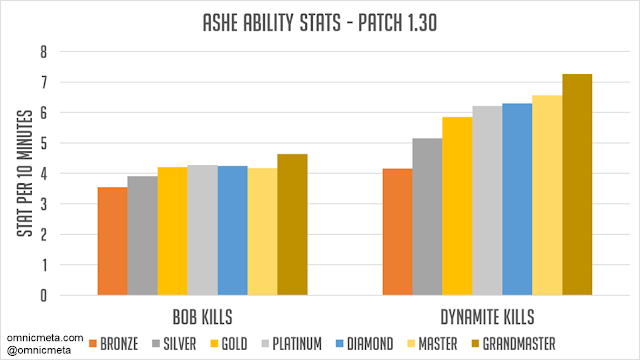 Some of you may be saying to yourselves - "I don't care about Ashe, what about Bob??".  Well, the data speaks for itself - Bob gets about 4 kills every 10 minutes pretty much regardless of competitive tier.  To put that into perspective, Bob's impact on securing kills is roughly the same as Junkrat's Riptire, Hanzo's Dragonstrike, and Pharah's Barrage  - but lagging way behind Genji's Dragonblade (~6 kills per 10 minutes).  However, Bob isn't simply kills as he also enables the team using knockups (e.g. to enable Rein's Earthshatter) or perhaps more importantly contesting the objective.

While Bob appears to not require much skill to use, Ashe's dynamite is a different story.  Dynamite is a clear differentiator between the tiers, contributing to 28% of kills at Bronze, and 35% at Grandmaster.  So not only does Dynamite contribute to a large amount of Ashe's offensive impact, it also takes quite of bit of gamesense to know when to use it and the mechanical skill to detonate it. 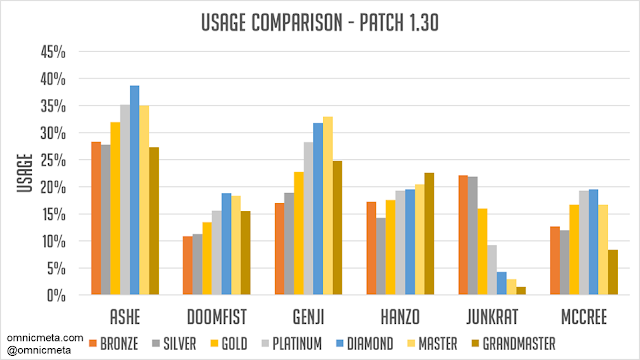 Let's look at how frequently the most popular Damage heroes are being chosen in competitive.  Overwatch players seem to really like Ashe at her introduction - she is being played roughly 1/4 to 1/3 of the time depending on the tier.  Right now, she's the most popular Damage hero in the game - though I suspect that her popularity will wane over time as the newness wears off.  Other heroes such as Doomfist initially made a big splash in competitive mode (25% usage at launch), but lost popularity.  So what doesn't the Damage hero meta look like today? Genji is incredibly popular as the Dragonblade combo with Ana's nanoboost remains very strong.  Hanzo is still a common pick, as is Junkrat at the lowest tiers.  McCree and Doomfist seem to have ceded the most popularity with Ashe's introduction. 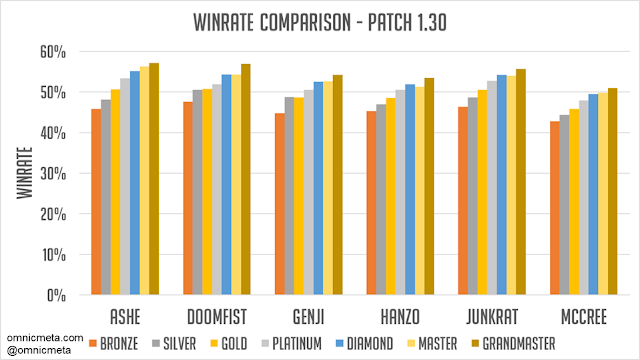 In terms of winrate, Ashe is #1 right now among Damage heroes.  She has high winrates at every tier, peaking out at 56% in Grandmaster.  Perhaps most notable is her 53% winrate in Platinum.  For the rest of the damage category, other popular heroes like Doomfist and Junkrat post great winrates (though Junkrat is very niche at high tiers of play), Genji and Hanzo post respectable winrates, while McCree retains his recent low winrates.

Ashe has made a real splash in Overwatch competitive in her first week.  With great offensive output, a highly impactful ultimate (Bob), relatively low risk of feeding (dying) and great winrates, it's hard to ask much more from her.  While it is certainly possible that her popularity will wane as Season 13 progresses, she still remains a solid pick now and likely into the future.