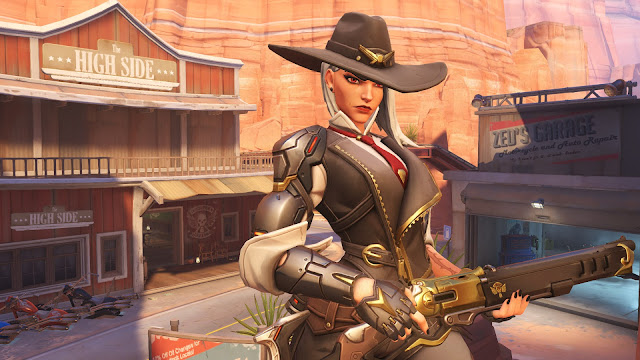 Ashe is the 29th hero in Overwatch and is now on the PTR!  She is the leader of the infamous Deadlock gang in the western outlaw hero motif.   I've gone into the training room and collected statistics for each of the abilities to see how she plays.  You can find all the nitty gritty details that I've found so far below. (The stats are a work in progress - I will refine as we learn more.)

Ashe is listed as a damage hero, and her main playstyle is that of a hitscan weapon similar to Soldier: 76, McCree, and Widowmaker.  Her repeater rifle packs a punch, and when scoped gives some of the highest burst damage in the game.  Currently, it seems like players will be interleaving scoped and unscoped fire quite frequently.  One thing that makes Ashe's weapon more unique is the way that reloading works.  Reloading a completely empty magazine takes roughly 4 seconds, but Ashe can also reload a single shot at a time, which means that reloading in between shots is recommended.   Besides her repeater rifle, Ashe throws dynamite which can explode to damage multiple enemies at once (with both explosion and burn damage).  Ashe has great mobility with her Coach Gun ability, which allows her to "super-jump" to high ground or get separation from/ crush heroes that dive her (she can also "boop" enemies for environmental kills!).  Finally, Bob is her ultimate - a 1200 HP omnic that charges enemies and acts as a turret to harrass enemies and contest objectives.