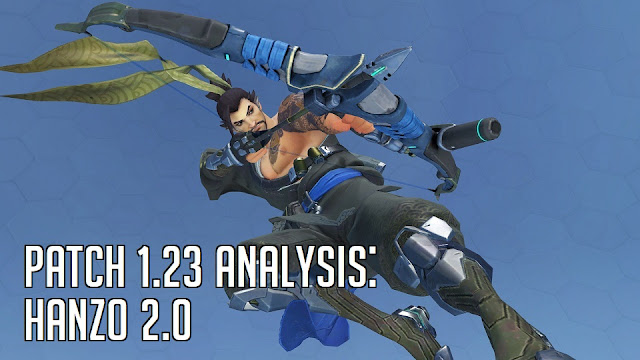 The new Hanzo is finally here!  Many players have been waiting for this moment: A new Hanzo kit.  Whether you have been on the wrong side of a Scatter Arrow (and I'm sure many of us have), or if you just feel like Hanzo's old kit was lacking something, rejoice!  Overall, Hanzo is feeling pretty good and has finally come into the meta.  As always, I hope you enjoy this article!


Follow OmnicMeta articles on Twitter or Patreon.
Be sure to check out the popular analysis on Brigitte and the new meta!


This article dives into the latest rework for Hanzo and compares the new kit to other DPS heroes in Overwatch.  While the new kit has only been out for a week, we have data from 100,000 competitive matches on PC which gives us a good sample of how Hanzo is being played in practice.  All in all, Hanzo is looking really good right now - better than he ever has before. His new kit brings two things: more mobility with Lunge, and a new offensive ability Storm Arrows which replace Scatter Arrow.  Let's dive more into how these changes affect Hanzo on the latest patch.

Let's start with the big question - has the rework changed Hanzo's offensive output? The answer is a resounding "Yes".  In the new meta, damage per minute has gone up +5% on average for all heroes in Overwatch due to longer and drawn out team fights.  The big reason is that Brigitte's healing and armor simply keeping people alive longer, and if heroes don't die they can continue to put out damage. Despite the +5% uptick in damage across the heroes, Hanzo's increase is a mind boggling +23%, with the next highest hero being Pharah at +9%.  Two-thirds of that +23% increase is an increase to barrier damage with the rest increasing hero damage (Storm Arrows are proving to be good barrier busters).  Based on the data, the move from Scatter Arrow to Storm Arrows has pushed Hanzo to be extremely productive in dishing out damage. 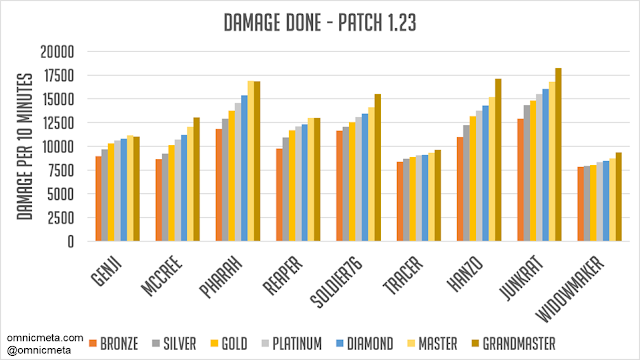 The chart above compares Hanzo to other DPS heroes that are being played significantly in the  current meta.  In the current meta, Hanzo has turned into one of the highest damage output heroes in the entire game - nearly identical to Pharah and close to Junkrat.  Considering that Hanzo has the fastest projectiles in the games, while both Pharah and Junkrat have some of the slowest makes him look all the more impressive in his current state.  A decent comparison to Hanzo is McCree: both heroes are burst damage heroes with significant time between shots.  Despite the obvious differences in hitscan (McCree) and projectile (Hanzo ), Hanzo's Storm Arrows likely make up difference in damage output.  Anecdotally, there are quite a few players that have noticed similarities between the two heroes and are preferring to run Hanzo over McCree in the current meta. 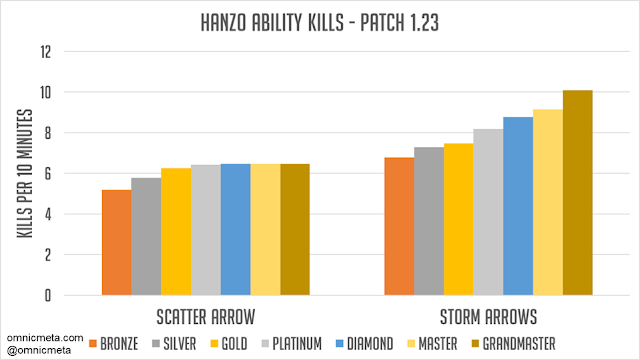 Is the new ability Storm Arrows better than Scatter Arrow?  It's difficult to compare both abilities side-by-side - while they both were designed to accomplish a similar mission ("Tank busting"), they do it in very different ways.  Scatter Arrow was purely a burst damage ability that could kill high-health enemies in a single shot, while Storm Arrows deals high damage over time across several arrows.  Instead of aiming for a single Scatter Shot, Storm Arrows requires continual aiming to be productive.

Despite the differences, it's worth seeing the impact of the abilities side-by-side.  The chart above compares Scatter Arrow before the patch, and Storm Arrows after the patch (both in Season 10 in the Brigitte meta).  On average, Storm Arrows are enabling players to get +33% more kill than Scatter Arrow.  An important note from the data is that Scatter Arrow kills flatten off around Platinum - a testament to the "no skill" argument about the low-skill ceiling of the ability.  On the other hand, players in higher tiers continue to get more and more out of Storm Arrows as it is a very aim-intensive ability.  Based on the data, Storm Arrows is a very high-impact ability that has increased Hanzo's damage and kill potential tremendously.


Hanzo and Meta: Usage and Winrates 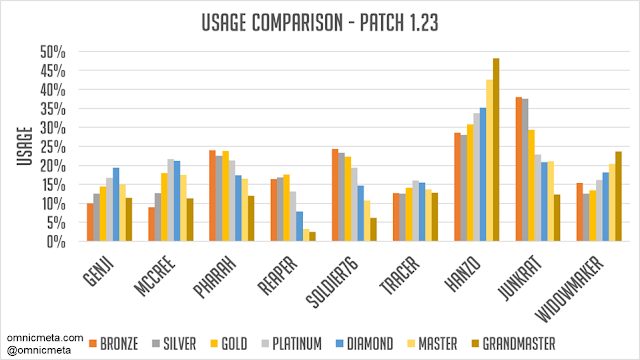 The new Hanzo has been live in competitive for one week so far - and he has made a huge splash.  In fact, since I started collecting data on the Overwatch meta 18 months ago, Hanzo has never seen this level of popularity.The chart above show the usage of the same popular DPS heroes - and at nearly all tiers, Hanzo is the #1 most popular DPS hero.  Hanzo's popularity is roughly 30% usage at Bronze and soars to nearly 50% usage at Grandmaster - he's on your team in 1 out of 2 matches now.  If you've been keeping up with the meta, you realize that Hanzo has seen a huge increase in play since before his rework - he is up +22% across the tiers, and a full +42% at Grandmaster.  It's perhaps a perfect meta scenario for Hanzo right now - a huge damage and mobility buff, coupled with a slow-paced meta full of barriers. 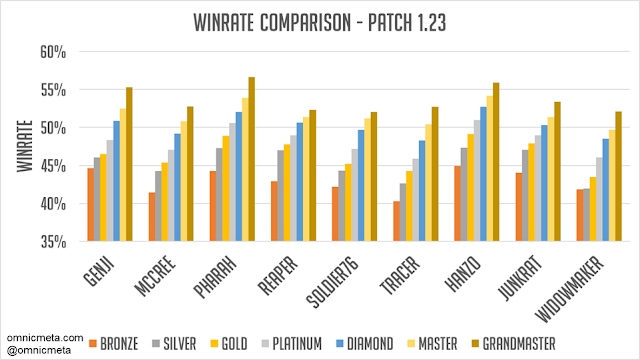 Hanzo's used to have some of the worst winrates out of the DPS heroes - in most tiers less than 50% on average.  He was considered a net detriment to the team - but no longer in the current meta.  His winrate has spiked +6% on average, and even higher in Master (+8%) and Grandmaster (+11%).  The chart above shows his winrate compared to other prevalent DPS heroes - and Hanzo has some of the best winrates in his class right now.  His kit and the current meta allows him to be quite successful - where others (McCree, Tracer) have not adapted as well.

Hanzo looks really good right now: higher mobility and damage output makes him a pretty good fit for the current meta.  Even more positive is that the "issues" with scatter have been resolved with the new Storm Arrows.  No longer does Hanzo have a "no skill" ability with a low skill ceiling - the data on Storm Arrows shows that higher-tier players continue to get more out of the new ability.  Is he "overpowered" with his new kit?  I don't think the data suggests that at all - his winrates are in line with other DPS heroes (unlike prenerf Brigitte for example).  Overall, if you love to play Hanzo, now is your chance to jump in and play him - you never know when the meta will favor him again.